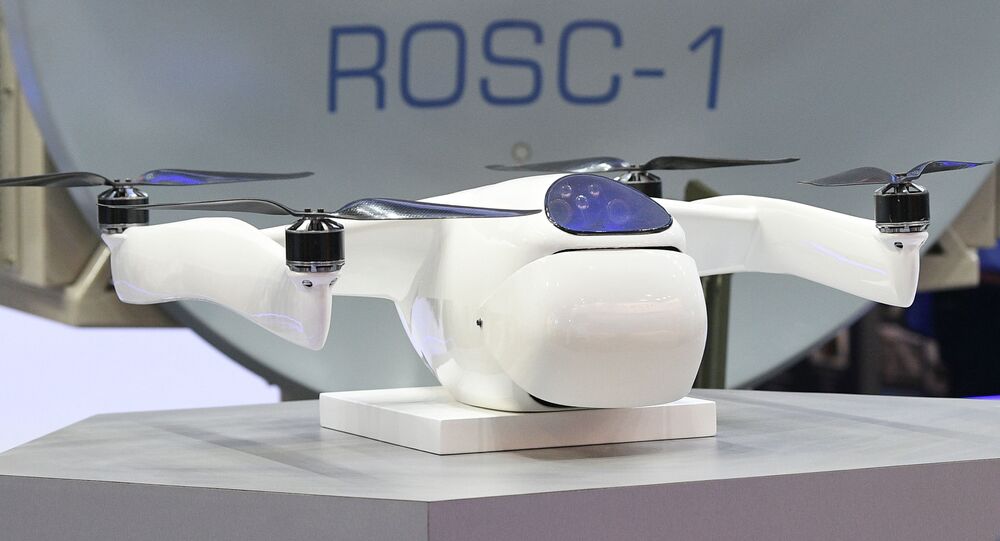 Russia has been a relatively late entry in the field of modern unmanned aerial vehicles for military use. However, engineers from major defence firms are now working on a range of projects, including a heavy drone bomber, long-and-medium range reconnaissance UAVs, and smaller systems for local recon and defence.

Russian defence giant Almaz-Antey has wrapped up testing of an enhanced version of a new interceptor drone designed to find and shoot down or ram enemy drones autonomously, a company representative has told Sputnik.

The drone, called the Volk-18, or "Wolf-18," is said to be a substantial improvement over a previously unveiled version of the UAV, featuring a new optical locator system which increases target detection range, and an enhanced control system.

“Flight testing of the upgraded version of the Volk-18, including the destruction of real-life drone targets, has been successfully completed. The UAV has been improved significantly. We plan to enter state testing this year,” the official said.

Elaborating on the Volk-18’s capabilities for autonomous operation, the Almaz-Antey official explained that “now, the operator only confirms the decision to attack the enemy drone. Search, identification, target selection, manoeuvres and the actual destruction of UAVs are carried out independently. Among Russian drones this is the first system of its kind.”

The Volk-18 is on display at the National Aviation Infrastructure Forum & Show, a major exhibition in Moscow running February 9-10. Before that, an earlier version of the drone was shown at the ARMY-2019 military expo.

The drone measures 60x60 cm, has a takeoff weight of up to 6 kg, and a flight time of about 30 minutes. Its armament includes three small rocket launchers that shoot nets at enemy drones, entangling them and bringing them down. If that fails, the drone rams the enemy UAV, breaking it up in mid-air.

Russia’s need for mini-drones became apparent during the country’s counter-terrorism mission in Syria, with the military regularly intercepting and destroying small off-the-shelf drones packed with explosives launched by jihadists at the Russian air base in Latakia.

Late to the Drone Game

Despite its status as a major military power, Russia’s developments in the field of drones have been limited, until recently, with the United States, China, Iran, Britain, and South Africa developing and fielding drones in the 2000s and early 2010s as the Russian military did without. During the Cold War, Soviet engineers developed a series of unmanned tactical reconnaissance aircraft, fitting the turbojet-powered UAVs with cameras and TV datalinks to enable them to snoop on enemy activities. In the 1990s, efforts to modernise these systems and create new ones were beset by overwhelming financial difficulties. Russia resumed research into drones in the late 2000s and early 2010s, with the Sukhoi Design Bureau now at an advanced stage of work on the "Okhotnik" ("Hunter") flying wing combat UAV, and OKB Sokol developing the Sokol Altius long-endurance reconnaissance, strike and electronic attack drone for use by the Air Force and Navy. Other companies are working on a number of other projects, ranging from a drone wingman for the new Sukhoi Su-57 fighter, to artillery projectiles that can launch small UAVs.