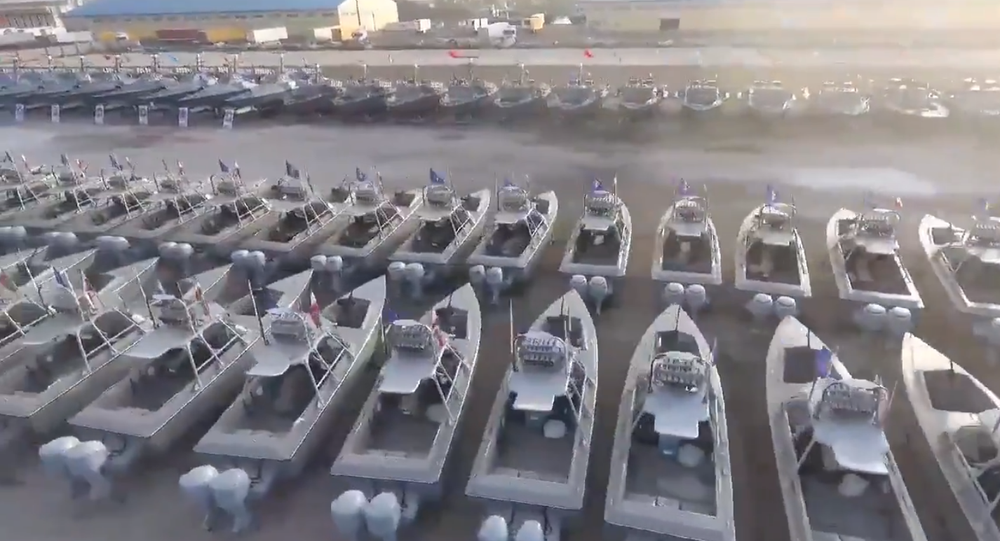 The Islamic Republic’s large coastal defence fleet of small missile and machinegun-armed speedboats has become a major headache for US military planners. Last year, then-President Donald Trump threatened to blow Iranian speedboats out of the water after accusing Iran of “harassing” large US surface warships by zipping by them at high speeds.

The Islamic Revolutionary Guard Corps Navy has taken delivery of some 340 new combat speedboats for operations in the country’s southern waters.

Speaking at a ceremony in the strategic Strait of Hormuz-straddling city of Bandar Abbas on Monday, Mohammad Bagheri, chief of staff of Iran’s Armed Forces, said that “with features such as agility, high manoeuvrability, high firepower, stealth – as far as is possible, and many other features, the speedboat plays an irreplaceable role in the sea.”

“Building and using a speedboat is not something that other countries cannot do, but the factor that makes this small vessel an irreplaceable power is a competent [sailor] who is responsible for defending against and attacking the enemy,” Bagheri added.

The commander went on to praise the Navy’s growing missile, mine, submarine, and surface combat capabilities, and to stress the importance of Iran securing its maritime borders in the Persian Gulf region.

“The existence of more than two-thirds of the world’s fossil fuel reserves and the shipping of 20 percent of these resources through the Strait of Hormuz has made the security of the people of this region an issue of great importance. The IRGC Navy has been able to fulfil its responsibility for security in the region,” Bagheri said.

#Iran’s #IRGC commander, Gen. Salami, has warned the regional governments not to be excessive in building friendship ties with #Israel “because in any land that they grow there will be nothing but fire.”
He made the comments at an event for delivering 340 speedboats to the IRGC. pic.twitter.com/hBi5k4dAQQ

Iran’s defence industry has perfected the creation of small attack speedboats, with a variety of designs developed to maximise the boats’ hydrodynamic properties, reduce their radar cross section, allow for acceleration to speeds of up to 90 knots (over 165 km per hour), and enable them to pack a serious punch via onboard rocket or missile launchers.

The Revolutionary Guard Navy took delivery of another 112 speedboats of various classes last May amid escalating tensions with Washington.

Iran’s coastline includes roughly 1,700 km of coastal waters in the Persian Gulf and the Gulf of Oman, and the country has contributed substantial military and diplomatic resources to defending the high-traffic area from foreign incursions. In 2019, Iran proposed a "coalition of hope" in the Persian Gulf, a security initiative aimed at reducing regional tensions and keeping outside powers out of the region.

© Photo : Tasnim News / IRGC
Iran's Revolutionary Guards Unveil Underground Missile Base Near Persian Gulf Coast - Photos, Video
Last month, a senior Iranian commander boasted that Iran’s vast array of missiles has helped the country parry the threat posed by the US Navy, Tehran’s main strategic adversary. In January, the Islamic Republic staged large-scale ballistic and cruise missile drills, with the exercises seeing missiles fired from ships and coastal batteries, the deployment of a variety of combat and reconnaissance drones, and the firing of a ballistic missile at a seaborne target over 1,800 km away.

Iran-US tensions soared to historic highs during the Trump administration, with the two nations stepping back from the brink of military conflict repeatedly amid a series of tanker seizures, drone shoot downs, and the assassination of a senior Iranian military commander, which led to the pummelling of two US military bases in Iraq with ballistic missiles.

Iran expressed cautious optimism that the incoming Biden administration would seek to quell tensions and rejoin the nuclear deal abandoned by Trump in 2018. However, on Sunday, President Biden indicated that the US would not lift its sanctions against Tehran until the country halted its uranium enrichment activities and returned to its obligations under the nuclear agreement. Iranian authorities maintain that because it was the US side which abrogated its commitments to the treaty, it should be Washington that takes the first steps to rejoin it, including by lifting all restrictions against Iran.