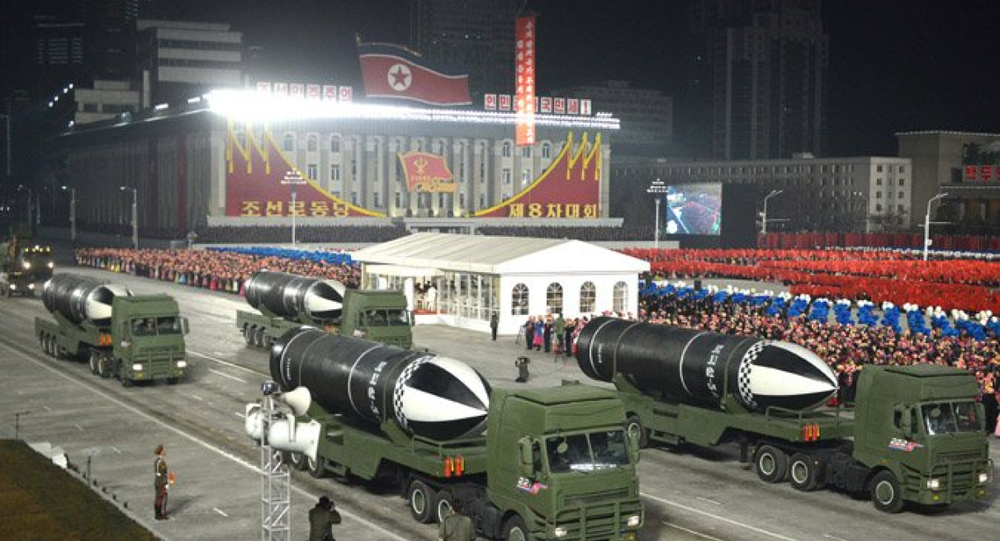 During the recent congress of the Workers’ Party of Korea, chairperson Kim Jong Un noted the country’s need to improve its nuclear forces in order to guarantee an effective deterrent to attack.

At a massive military parade in Pyongyang on Thursday, the Democratic People’s Republic of Korea (DPRK) unveiled a new submarine-launched ballistic missile and a new short-range missile (SLBM).

One weapon is identified by KCNA as a submarine-launched ballistic missile - “the world’s most powerful weapon.” Indeed, the ability to fire a missile carrying a nuclear warhead from anywhere on the globe, undetected, has provided a handful of nations with an effective nuclear deterrent for decades.

Defense analysts noted the new SLBM was unknown to them. Following the pattern of Korean People’s Army names, the missile would presumably be called the Pukguksong-5, although no designation was supplied by KCNA.

In October 2019, the DPRK showed off its Pukguksong-4 SLBM, which analysts noted is shorter than the new missile and which has a slightly different shape. However, Pyongyang has not performed an SLBM test since then, presenting another mystery about the new weapon.

For comparison, this is the Pukguksong-4, revealed last October. The new missile definitely looks longer; the troop bench was removed from the trailer in order to fit the new missile. The front set of missile supports might have been moved, as well. https://t.co/rIEZcROydJ

​Seoul-based Yonhap News Agency reported that the South Korean Joint Chiefs of Staff issued a simple statement saying they were analyzing the military items seen in the parade.

In November, South Korea’s National Intelligence Service briefed lawmakers on North Korean plans for two new submarines, one of which could carry SLBMs.

“One is a modified Romeo Class and the other is a new medium-large size one,” Ha Tae Keung, a lawmaker from the opposition party in parliament, told Reuters after the briefing. “Romeo” is the NATO designation for the Soviet Union’s Project 633 diesel-electric attack submarines. Pyongyang is purported to have 20 Project 633s in service. The class has been modified to fire anti-ship missiles, but never ballistic missiles.

A second new weapon spotted during the parade was identified by analysts to be a short-range solid-fueled missile. Like many of the DPRK’s other short-range missiles, this one was also mounted on a wheeled mobile launch track.

“It resembles a KN24, but on a KN23-style” transporter, erector and launcher (TEL), Ankit Panda, a researcher and nonproliferation expert at the Carnegie Endowment on International Peace, tweeted on Thursday.

“The sheer diversity of new short-range solid-fuel missiles we’ve seen over the last few years in North Korea is pretty amazing. KN23/KN24/KN25 and now this. And that’s on top of the older liquid-fueled Scuds and the Toksa,” he added.

That would make the weapon similar to those tested several times over the Sea of Japan since May 2019, which were also identified as short-range ballistic missiles. While they aroused anger due to Pyongyang’s pledge to halt long-range missile tests, US President Donald Trump, then in denuclearization negotiations with Kim, noted in July 2019 that the agreement didn’t include short-range weapons.