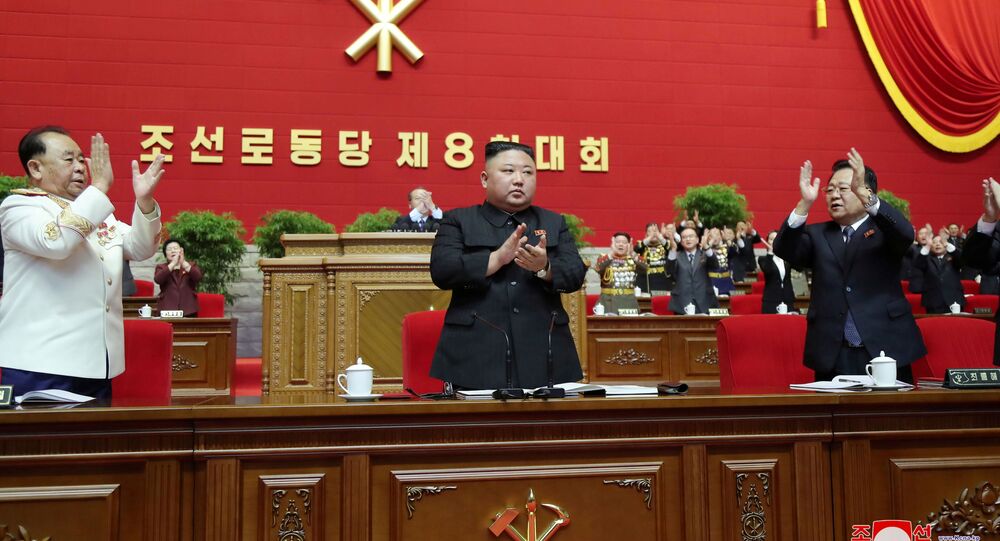 The alleged military parade, which reportedly included armoured vehicles and an unknown number of troops, could have been held after the 8th Congress of the ruling Workers' Party of Korea, where Kim Jong-un was elected general secretary.

According to NK News, citing a statement by South Korea's Joint Chiefs of Staff, the parade was spotted at the capital's Kim Il Sung Square, though it may have been a rehearsal for a future parade.

US-ROK intelligence authorities closely monitoring, considering possibilities that the parade was part of Party Congress event or "practicing" in advance

The previous parade of such scale in Pyongyang was reported in the first ten days of October last year.

KCNA reported that the Eight Congress of the nation's ruling party has elected its leader, Kim Jong-un, as general secretary of the organization. The congress reportedly adopted the decision unanimously, giving Kim the same title as his father and grandfather had before him.

The North Korean supreme leader is also the supreme commander of the armed forces, the marshal of the Korean People's Army, the chairman of the WPK Central Military Commission, a member of the Political Bureau of the Party Central Committee, and the head of the State Affairs Commission.

At the party congress, the DPRK's leader said that his country would continue to improve its nuclear weapons, as it was forced to deter hostile forces, according to KCNA.

"It is necessary to do so as to actively and fully deter and control the military threat that is forced on the Korean Peninsula, improving nuclear technologies, reducing the size and weight and increasing the strategic power of nuclear weapons," Kim said as quoted by the news agency.

He said it was necessary to develop strategic nuclear weapons that could be used in modern war in a variety of ways, depending on the target and the operation task.

"[T]he main task facing the sector of defence science at present to rapidly advance the Korean People’s Army from the conventional type into an elite hi-tech one by developing the defence science and technology and inventing more advanced weapons and combat equipment." 5/

​In an apparent hint at the incoming Biden administration, Kim called the US his country's "biggest enemy", adding that Washington's policy towards Pyongyang would not change, and this did not depend on who held the leading positions in the White House.

Kim Jong Un hints at the direction of US-North Korea relations under Biden:

According to the KCNA, Kim also said that the country had completed the development of a new nuclear submarine. The congress set forth plans to do everything possible so that in the near future the country would possess both this submarine and other types of new weapons being developed.

Inter-Korean Relations 'on Verge of Disaster'

According to Kim, inter-Korean relations have reached a crossroads. The two countries should rectify the current state of affairs and move toward peace and unification, otherwise the confrontation will intensify and relations will freeze, and the sides will experience the "pain of division" in an atmosphere of a "threat of war," the agency reported.

"It is no exaggeration to say that North-South relations have now returned to the pre-[2018] Panmunjom Declaration state, the dream of unification is now even further away," Kim said in the report.

Pyongyang claims that Seoul continues its hostile activities and rhetoric toward the North, which makes the future of inter-Korean relations "hazy." The problem at the same time cannot be solved at the level of ordinary people, and it "will not disappear by itself" over time.

North Korea expects the South to demonstrate "sincerity" in relations, which includes the cessation of joint drills with the United States and hostile actions as well as the implementation of all inter-Korean agreements, according to the report.