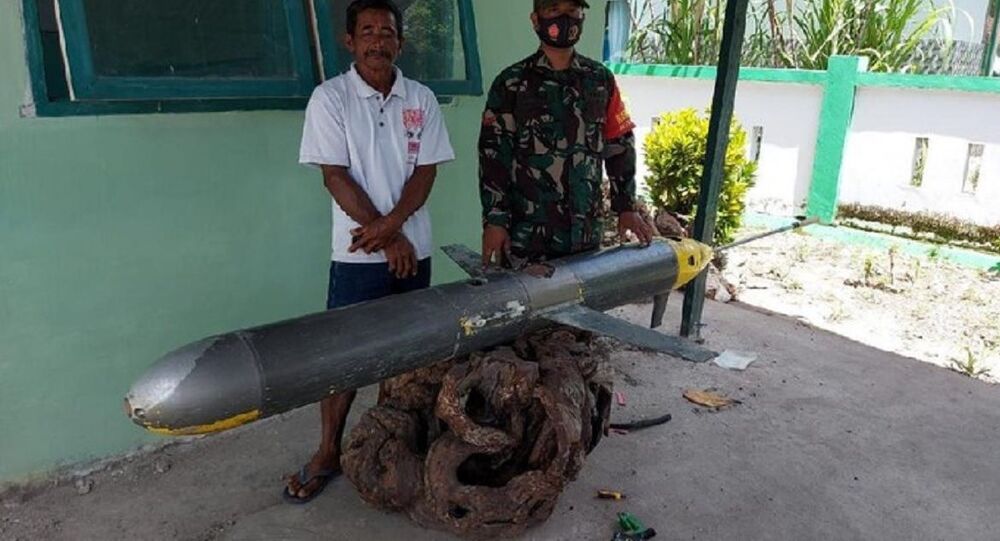 Media suspect the discovery may be an indication that the PRC is carrying out covert surveying activities in Indonesian waters. China has not made any formal statements on the matter. The two countries have a territorial dispute in the South China Sea, with part of Beijing’s maritime claims overlapping with Jakarta’s exclusive economic zone.

An Indonesian fisherman has caught a mysterious torpedo-shaped object equipped with cameras off the Selayar Islands, an archipelago in the South Sulawesi province of eastern Indonesia.

Local media says the object appears to have an aluminium hull and includes two vertical fins with a 50 cm wingspan. The object is 225 cm long, has an 18 cm-long tail, and a 93 cm-long rear antenna, with camera-like devices said to have been found inside the tube. The fisherman made the catch earlier this month, with the mystery object since handed over to local police, who then passed it on to the Indonesian military.

BREAKING. Second Chinese 'Sea Wing' submarine drone found in Indonesian waters. The first was near the Strait of Malacca, this one near the Lombok Strait and Sunda Strait. ....Indian Ocean

As evidence, Sutton refers to a pair of illustrations showing the drone and its components.

The object caught by the fisherman looks similar to the illustrations created by the intelligence analyst, but is missing the characteristic tail fin and rudder, and has several round holes drilled into the top and rear of its hull, as well as what appears to be a hatch over the fin area. The object’s nose cone also seems stubbier, while the placement of the Sea Wing’s "compartments" does not appear to match that of those in the mystery drone.

The shape of the Sea Wing is itself similar to the US Navy’s Littoral Battlespace Sensing-Glider (LBS-G), with only a few visible differences, including the Sea Wing’s rear extending antenna, a larger rear top-mounted fin in the US design, a black stripe around the nosecone area in the LBS-G, and the lack of three circular sensor windows in the nose cone. China caught a US LBS-G snooping in the South China Sea in December 2016, sparking a minor diplomatic scandal. Beijing later returned the drone.

Images of US Navy's littoral battlespace sensing-#glider (LBS-G) like the one snatched by China last week. Clearly a threat. pic.twitter.com/h2hx3cK73I

Assuming that the drone is indeed a Sea Wing, Sutton suggests that its discovery in Indonesian waters may indicate that the Chinese military is carrying out surveillance activities to collect data that may serve useful in wartime, including info about local geography such as temperature, turbidity, salinity, chlorophyll, and oxygen levels, with this information potentially useful to Chinese submarines.

Boeing / YouTube
Boeing Building Massive Sub-Hunting, Nuke-Launching Undersea Drone - Reports
The Xiang Yang Hong 06, a Chinese survey and research ship, launched 12 Sea Wing drones in the Indian Ocean last year, with the gliders said to have logged over 3,400 survey profiles and to have obtained large amounts of hydrological data for scientific purposes from within an area of 300 square miles. The mission was part of the Ministry of Natural Resources’ Joint Advanced Marine and Ecological Studies (JAMES) expedition.

Unlike many of its other neighbours, including Vietnam, the Philippines, Malaysia, and Taiwan, China’s relations with Indonesia have been less blemished by conflicting claims in the South China Sea. However, China’s nine-dash line claims do overlap with what Indonesia says is its exclusive economic zone near the Natuna Islands, west of Borneo. That maritime spat has sparked threats of legal action and confrontations between coast guard and trawler vessels. Indonesia has also occasionally deployed its military to the area, while China has sometimes escorted fishing vessels with its own warships.