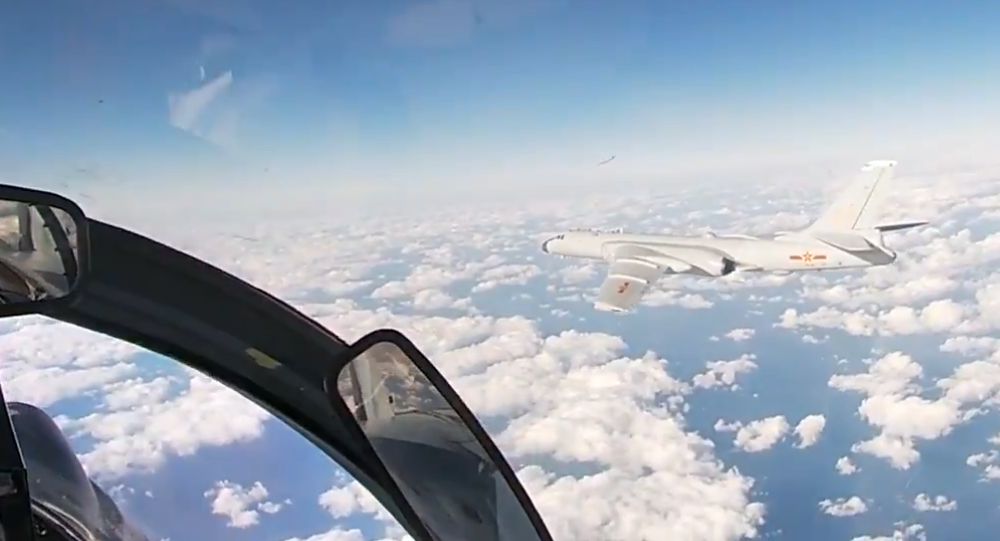 The Russian military has observed a major rise in US and allied aerial activity along its maritime borders in recent months, and has escalated its own patrolling, particularly in the Russian Far East and off the US West Coast.

In a statement Tuesday, the military said the flight, taking place in the Asia-Pacific region, had been carried out strictly as planned, with the F-15s accompanying the Russian and Chinese planes during part of their journey.

Earlier, the Defence Ministry released a video of the joint air patrol. The footage shows Russian strategic bombers and Su-35 fighter jets taking off from snowy airfields, as well as People's Liberation Army Air Force bombers patrolling high above the skies at an undisclosed location accompanied by fighter escorts.

The flight was said to have involved two Russian Tu-95 bombers and four Chinese H-6K bombers, and to have taken place over the Sea of Japan and the East China Sea during a 10-hour period. A Russian A-50U radar patrol and guidance aircraft was also involved. This was the second flight of its kind since a similar outing in July 2019.

Earlier Tuesday, South Korea's armed forces reported scrambling fighters in connection with the entry of 19 Russian and Chinese military aircraft into the country's air defence identification zone (KADIZ), a concept not defined in any international treaty and which Russia and China have not recognised or dispute the extent of.

The Russian MoD stressed that Tuesday's flight was not "directed against any third countries," but aimed at further deepening "the comprehensive Russia-China partnership" and expanding the "ability for joint action" of the two countries' militaries.

Later in the day, the Russian military revealed that a Sukhoi Su-30 fighter jet was scrambled to intercept a Japanese Maritime Self-Defence Force Lockheed OP-3C anti-submarine anti-sub/maritime surveillance aircraft over the Seas of Japan and Okhotsk as it approached the Russian border.

No violation of the border was allowed to take place, according to a statement by the MoD.

Russia and China enjoy high levels of military co-operation. Both are members of the Shanghai Co-operation Organisation, a Eurasian mutual security, political and economic partnership. In October, President Putin said that "theoretically it is quite possible to imagine" a military alliance with China, even if such a partnership is not seen as necessary at present.