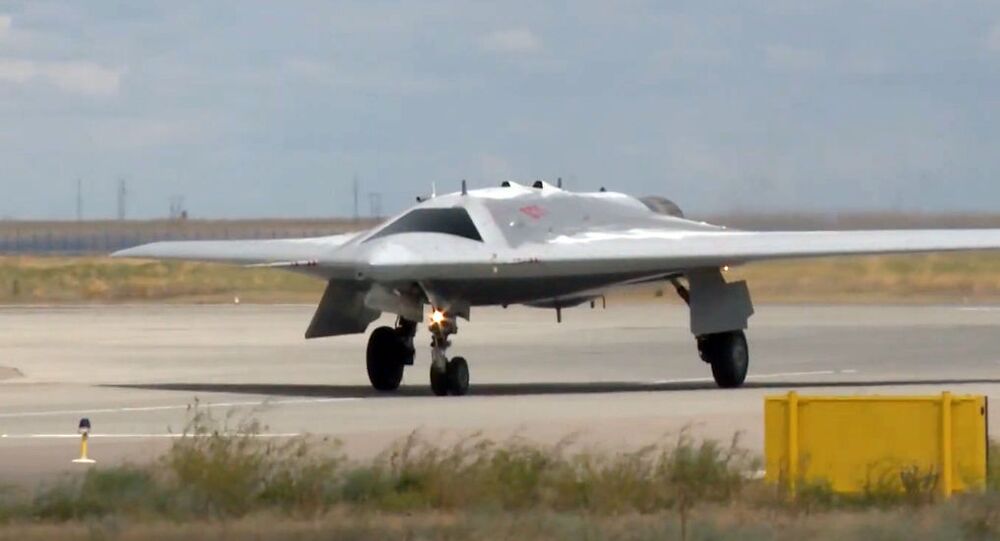 Russian companies are working on several prospective drone systems of various weight classes and designations (including strike and reconnaissance), and have been flight-testing two unmanned aerial vehicles – the 6-tonne Altius-U reconnaissance drone and the stealthy 20+ tonne Okhotnik (‘Hunter’) flying wing for over a year now.

“The Russian Defence Ministry has previously claimed the Okhotnik will ‘broaden the [Su-57’s] radar coverage and provide target acquisition for employing air-launched weapons’. If true, this suggests that the drone could be used to cue longer-range weapons against air and ground targets on behalf of the Su-57, serving as a ‘loyal wingman-type complement’ to the aircraft. It would also imply that it would be equipped with sensors allowing it to detect, track, and engage aerial targets,” Newdick suggests.

“With this in mind, it could also be possible for the drone to attack aerial targets with its own weapons, although the degree of autonomy that would be involved in such a process is unclear. However, the emerging ability of the Okhotnik to carry missiles itself would lend it to a future role as a ‘weapons carrier’ for the Su-57, increasing the fighter’s available arsenal and potentially keeping the manned fighter further away from hostile fighters and other threats,” the observer adds.

As his evidence, the journalist points to a recent story by Sputnik’s sister agency pointing to Okhotnik’s flight testing with simulated air-to-air missiles aboard at the Ashuluk firing range outside Astrakhan, Russia.

Newdick believes the drone may be armed with short-range R-73 and improved R-74M family missiles, as well as new K-74M2 missile, with the latter said to feature lock-on after-launch capability (these missiles have a range between 30 and 40 km). He also speculates that the Okhotnik may be capable of carrying medium-range air-to-air missiles like the R-77, the R-77-1, and the K-77M (these have ranges from 80-200 km).

The Okhotnik performed its maiden flight in August 2019, with the drone, also known as the Sukhoi S-70, designed by the Sukhoi Design Bureau – maker of the Su-57. The drone is said to be made of advanced composite materials and coatings to make it ‘practically invisible to radar’, and to be fitted with a variety of equipment for optoelectronic, radio-based and other reconnaissance.

The drone is rumoured to weigh over 20 tonnes, to have a 19 meter wingspan, and to use the same AL-31 series engines found aboard Sukhoi’s Su-27 fighters. The drone is also said to have a flight range of up to 3,500 km, and the ability to fly up to 920 km per hour, although it's not clear how its weapons load will affect these characteristics.

In August 2020, developers revealed several other prospective Russian unmanned aerial vehicle designs, including the 7 tonne Grom (‘Thunder’), a support combat support aircraft for the Su-35 and Su-57, and the Helios radar surveillance and guidance drone, created by unmanned aerial systems developer Kronstadt Group. The company is also working on another platform, the Sirius, a two-tonne long-range reconnaissance and combat UAV.