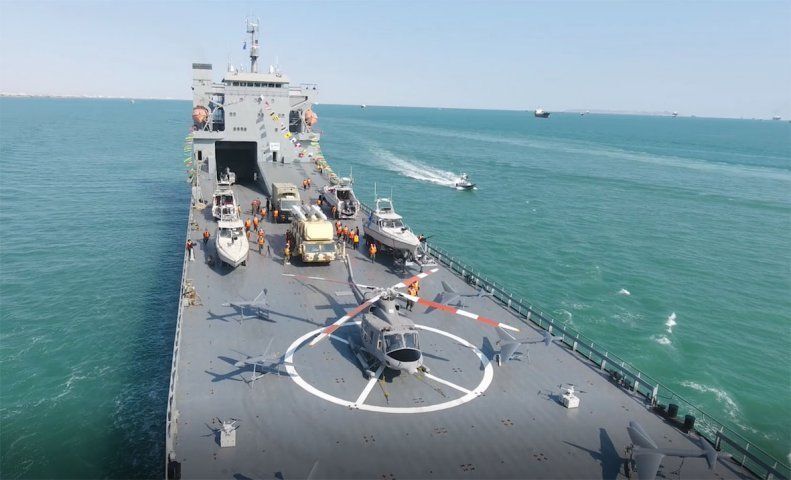 Iran’s Navy and the Revolutionary Guard Navy have traditionally limited the scope of their operations to protecting the country’s vast coastlines. Its ships have held drills in the Persian Gulf and the Gulf of Oman, as well as the Red Sea, the Mediterranean Sea and the Indian Ocean, but have yet to embark on missions in the Western Hemisphere.

Christened the Shahid Roudaki, in honour of assassinated IRGC Navy commander Abdollah Rudaki, the new warship is said to be capable of carrying helicopters, drones, fast attack missile boats and a range of anti-aircraft missile systems.

It is also said to be equipped with a 3D phased array radar, sea-to-sea missiles and advanced communication systems for electronic warfare.

A promotional video released by Iranian media shows the Shahid Roudaki carrying a variety of equipment, including a  Khordad missile system like the one which shot down a stealthy $200 million US drone over the Strait of Hormuz in mid-2019.

Other weapons onboard appear to include four twin long-range anti-ship missile launchers, six Ababil-2 drones, a lone Bell 212 helicopter, and an anti-aircraft gun mounted on its bow.

Janes describes the new vessel as a ‘roll-on, roll-off ship’ which can be used “as an expeditionary floating base,” pointing to the ease with which systems can be deployed on its large, flat deck.

The vessel formally joined the IRGC Navy’s fleet in a ceremony Thursday which was attended by IRGC supreme commander Maj. Gen. Hossein Salami and other senior military officials.

Commenting on the ship’s delivery to the IRGC Navy, Salami warned that the vessel gives the Islamic Republic new, previously unseen military capabilities.

“If anybody seeks to threaten the interests of this great nation, they will definitely find no safe spot on Earth,” the commander said, pointing to the ship’s long-range capabilities.

IRGC Navy Commander Rear Admiral Alireza Tangsiri, also present at the ceremony, emphasised that the new warship is “a messenger of peace, friendship, brotherhood and security,” and will be used to defend the country’s merchant vessels and oil tankers on the high seas.

© Photo : Twitter / @Hajizadeh_org
Iran Offers Glimpse of Rail-Based Multiple Launch System for Use at its ‘Underground Missile Cities’
Iranian officials have repeatedly expressed the need to ensure the security of the Persian Gulf region through regional cooperation, without the presence of foreign actors like the US or Israel. The IRGC has also expressed a willingness to dispatch vessels to international waters.

The US has repeatedly deployed its carrier strike groups and other warships near Iran’s waters, with Tehran lacking the hypothetical capability to respond in kind, until now. US naval forces in the Persian Gulf are headquartered in Bahrain.