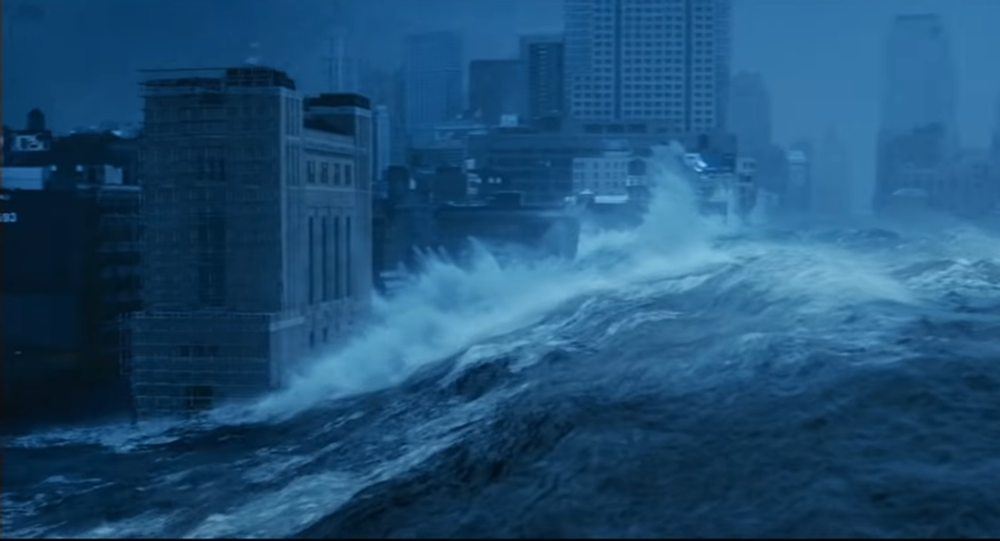 Russian President Vladimir Putin unveiled the Poseidon nuclear-powered autonomous drone torpedo in March 2018 with several other new strategic nuclear delivery systems aimed at guaranteeing Moscow’s ability to retaliate in the event of a large-scale enemy strike. Russia has pledged not to use its strategic weapons unless attacked.

Russia’s Poseidon nuclear drones threaten to annihilate American cities via biblical end of times-style scenarios and give cause to questioning Moscow’s commitment to international law, the US assistant secretary of state for international security and non-proliferation Christopher Ford has alleged.

In a paper presented to the Global Security Institute and the American Bar Association on Friday, Ford called the Poseidon a “disturbing” weapon because he believes Russia has the intention “to fit [them] with multi-megaton nuclear warheads and launch [them] across the ocean in wartime in order to inundate US coastal cities with radioactive tsunamis".

“The very operational concept of the Poseidon – involving an enormously destructive warhead dispatched without possibility of recall on a trans-oceanic passage that could take days – raises serious questions about the extent to which it could be used in compliance with applicable international legal rules and principles,” Ford argues.

“If one assumes that this system actually exists and functions as reported, if switched on by the high command in time of crisis, Perimeter would apparently automatically launch the country’s nuclear arsenal if it detected nuclear explosions in Russia and its computer brain could not thereafter establish communications links to the General Staff,” Ford said, explaining the system’s operating principle.

“For anyone concerned with the morality of nuclear weapons, Perimeter surely raises disturbing questions. Can Russia defend Perimeter as anything more than just a vindictive and barbaric fun-house mirror vision of apocalyptic retribution? Russia would seem to have a lot of explaining to do,” the senior official added.

In his paper, Ford also attacked China’s nuclear position, despite Beijing’s ‘No First Use’ (NFU) commitment and ‘minimum deterrence’ approach, while praising the US as “by far the most forthcoming among the nuclear weapons possessors when it comes to issues of doctrines, postures, policies, budgets and future plans.”

China, he alleged, has been “extraordinarily opaque” about its nuclear doctrine while expanding its arsenals, and “few foreign observers take [NFU] terribly seriously.”

Moscow began working on multiple ‘doomsday’ weapons in the 2000s, after the United States unilaterally scrapped the Anti-Ballistic Missile Treaty and began creating and deploying anti-missile systems in Eastern Europe, ostensibly to target ‘Iranian missiles’. Russian concerns were heightened by the Pentagon’s ‘Prompt Global Strike’ concept, which is the idea of a massed precision-guided conventional strike against an enemy to decapitate its leadership and defences, and disable its nuclear response capability.

In 2019, the Trump administration unilaterally withdrew from the Intermediate-Range Nuclear Forces Treaty, a Russia-US agreement banning the design, production and use of land-based missile systems in the 500-5,500km range. Russian officials are now urging Washington to renew the 2010 New Strategic Arms Reduction Treaty, or New START, before it expires in early 2021. New START is the last major strategic arms treaty between the nuclear superpowers.

In August, the Russian General Staff released an updated nuclear doctrine, with the document pledging Moscow never to be the one to initiate nuclear hostilities, and to use its nuclear arsenal only in the event of aggression that threatens “the destruction of Russia as a state”.

© AP Photo
Putin Says US Withdrawal From INF 'Grave Mistake', Creates Risk of Nuclear Arms Race
The document urges the US side to renew the New START agreement immediately, calling the treaty an effective way to “allow both sides to maintain control over strategic nuclear arms, ensure transparency of these arms and, as a result… make it possible to predict their combat capabilities of the specified period reliably” while working toward further limiting nuclear arsenals via new agreements.

The United States continues to work on a 30-year $1.5 trillion nuclear modernisation programme. After the 2018 Nuclear Posture Review, the Trump administration provided additional funding for the programme, including for the building of new tactical and sea-launched nukes, and lowered the threshold for their use to allow them to be deployed against a non-nuclear adversary.

In March, the Russian Defence Ministry announced that its nuclear forces would reach a modernisation rate of 87 percent by the end of 2020.