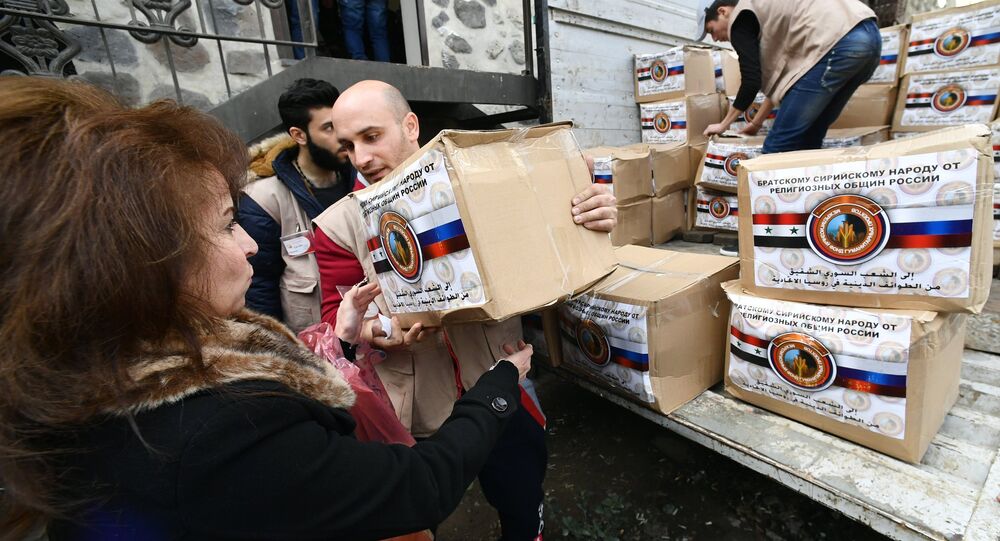 FADZHAN, Syria (Sputnik) - Russian military personnel from the Defence Ministry's Center for the Reconciliation of Warring Parties has distributed more than four tonnes of humanitarian aid to the residents of Fadzhan, a settlement in the Syrian province of Aleppo, a Sputnik correspondent at the scene reports.

"I came here with my grandson. He became an orphan as a result of this war. Thanks to our Russian friends for not leaving us in despair," Fatuma Omar, a local resident, said.

The Center for the Reconciliation of Warring Parties has carried out 2,633 aid deliveries since the start of the conflict in Syria, with the weight of goods distributed amounting to more than 4,500 tonnes.

The settlement of Fadzhan was badly damaged during the long-running conflict. Many local men enrolled in the Syrian armed forces and an estimated 15 people did not return home from the frontlines.

© AP Photo / Russian Defense Ministry Press Service
Seventeen People Killed, 53 Injured in Car Bomb Blast in Syria's Aleppo, Source Says
An international conference on the return of Syrian refugees is scheduled to begin in Damascus on Wednesday and run through Thursday. Syrian President Bashar Assad has said that Syria is ready to welcome back many of the millions of refugees who fled abroad following the outbreak of hostilities in 2011.

Russia will co-chair the conference, and Russian President Vladimir Putin said on Monday that as many as 6.5 million Syrian refugees are currently based abroad. Putin said that their return is in the interests of many stakeholders.