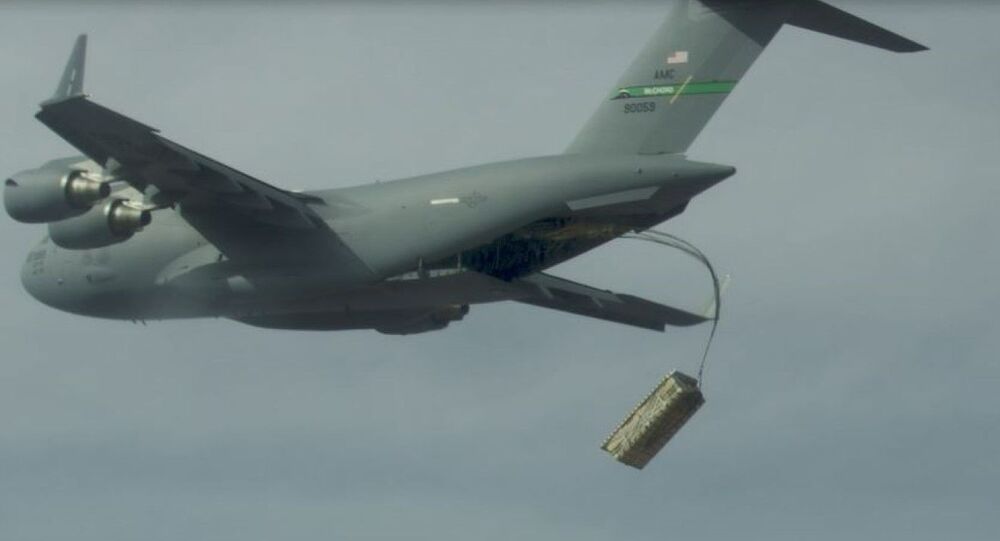 The defense contracting giant announced last week it had received a $25 million contract from the US Air Force Strategic Development Planning and Experimentation (SDPE) Office to further develop the Palletized Munitions Experimentation Campaign.

According to a company news release, the contract aims for a system-level demonstration in 2021 to really flesh out what’s possible with this novel weapon-launching design.

In May, the Air Force Research Lab tested the palletized munition concept for the first time by rolling a modified cargo pallet out the back of an MC-130J Hercules transport aircraft carrying what observers estimated to be two simulated AGM-154 Joint Stand-Off Weapon (JSOW) glide bombs. A second test in September saw a pallet carrying at least one simulated AGM-158 Joint Air-to-Surface Standoff Missile (JASSM) cruise missile launched out the back of a C-17 Globemaster III transport, the plane now chosen as the base on which to expand the program.

The palletized munition concept is an attempt at keeping existing airframes relevant while getting around the need to spend years of effort and billions of dollars either designing or ordering more bombers. However, the effort to find what has variously been called a “missileer,” “arsenal plane” and “bomb truck” was also tried out on existing bombers, and both the B-1B Lancer and B-52 Stratofortress are slated to carry some of the new generation of long-range missiles being developed by the Pentagon.

“A Palletized Munitions capability could enable various airlift aircraft to employ a range of weapons en masse via a self-contained, roll-on/roll-off palletized system, and may offer an alternative way for the Air Force to bring more mass to the fight,” Dr. Dean Evans, the SDPE’s Palletized Munitions Experimentation program manager, said in September.

This won’t be the first time a cargo plane has been modified to sport offensive capabilities: the US military operates several versions of the C-130 Hercules that can fire machine guns, rotary cannons and even a 105-millimeter howitzer at ground targets. Before that was the AC-47 Spooky, a modified C-47 transport plane with similar weapons.