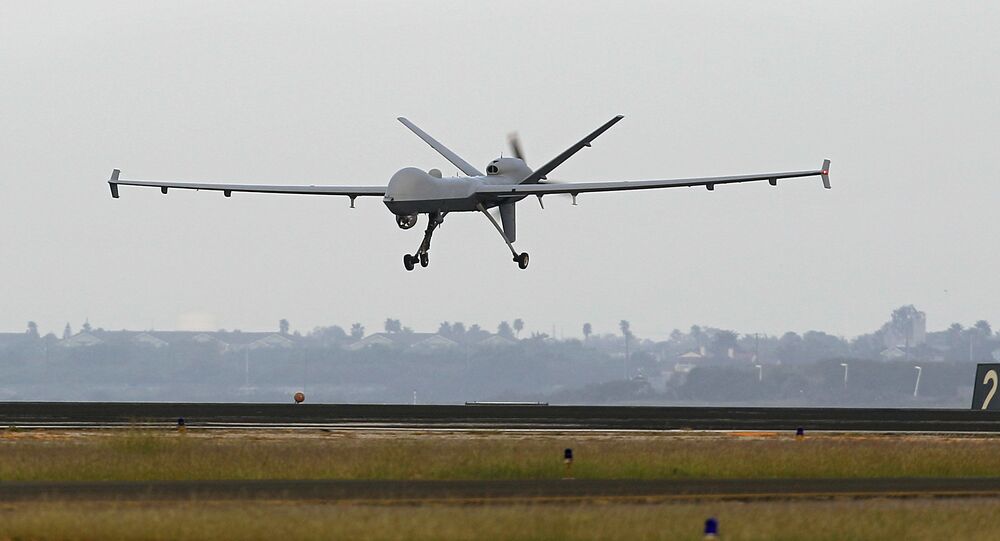 India and the US concluded the signing of the fourth and last foundational BECA agreement this week which, as per the Trump administration, was essential to transfer high-end technology and platforms, including drones. The Trump administration has also amended the rules that restrict the sale of military-grade drones to foreign partners like India.

© REUTERS / DANISH SIDDIQUI
US Could Use BECA to Tweak Data, Misdirect Indian Missiles for Vested Interests: Ex-NSA Member
Highly placed government sources in New Delhi told Sputnik that several reasons have been conveyed to the visiting ministers for not making a decision "in a hurry" on the proposal, which the Trump administration made in 2017.

“The deal is valued at around $3 billion. Financial constraint is one of the major reasons behind the decision, besides we are still evaluating the advantage that our armed forces can receive from these drones”, sources told Sputnik.

Officials admitted that there is “no consensus over the usefulness”, while adding that the sale of these armed drones was at the top of the agenda on the American side during the 2+2 ministerial meeting earlier this week, when US Secretary of State Mike Pompeo and Defence Secretary Mark Esper travelled to New Delhi to meet their Indian counterparts.

“The nature of India-US ties is that of partners and not allies. Hence, India will not take any hasty decisions just because the US made a proposal”, one of the officials emphasised.

During a joint press briefing at Hyderabad House in New Delhi, US Secretary of Defence Mark Esper had stated that the two countries look forward to advancing sales for key defence platforms, including fighter aircraft and unmanned aerial systems.

India showed interest in the procurement of military drones from General Atomics in 2015, which was declined by the Obama administration. A modified proposal was re-sent to the US after the Trump administration amended rules in 2017 that restrict the sale of military-grade drones to foreign partners like India.

© Sputnik / Mihail Mokrushin
China to Sell Armed Drones to Pakistan to Take on India's S-400 - Analyst
The inhibition towards American armed drones comes as India unveiled its most secretive armed drone "Ghatak" ("Lethal") earlier this month. India’s state-funded Aeronautical Development Establishment also expressed interest in the manufacturing and assembling of airframes of a scaled-down model of Ghatak in September.

Addressing the media on Air Force Day in the first week of October, Indian Air Force Chief R.K.S. Bhadauria emphasised that drones are an important part for surveillance and intelligence gathering. “However, once the conflict starts, they do become susceptible to enemy action, which is a known fact”, the air chief marshal added.

“There will always be limitations when drones are used to attack in the way they have been used in this (Armenia-Azerbaijan conflict). Some will fall to enemy action and a percentage will succeed. One should have a combination of such assets…(but) we cannot plan to win a war with just these”, the air chief said.

Experts believe that India does not have a pressing need for armed drones as the country is not fighting any adversary in permissive airspace: the Indian Air Force primarily wants to keep an eye on the movement near the border with China and Pakistan while operating its drones from Indian Air Space.