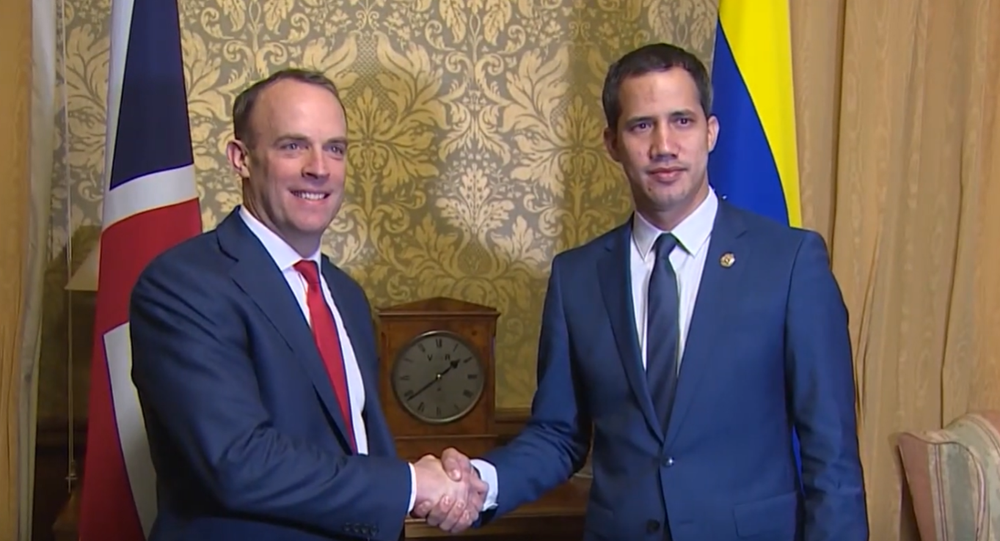 The British government has been revealed to be the main, if not sole, funder of key anti-corruption and transparency organisations based in Venezuela, according to information obtained via freedom of information requests.

Key individuals in Venezuela receiving support and funding from Britain's foreign ministry, as part of an anti-corruption funding scheme, have a history of backing the overthrow of the government and the privatisation of publicly held assets, according to official documents obtained by Declassified UK.

John McEvoy is an independent journalist who has published in the International History Review, The Canary, Tribune Magazine, Jacobin, Declassified UK, and Brasil Wire among other publications. He reported from Venezuela during the coup efforts in 2019 and from Colombia during the student protests the same year. Mr McEvoy explains the significance of the revelations that he and journalist Matt Kennard have come across following the release of documentations by the Foreign and Commonwealth Office (FCO). Readers will note that as of September 2020 the FCO is now known as the Foreign, Commonwealth and Development Office.

Sputnik: What are the revelations you've made vis a vis UK FCO funding of transparency/anti-corruption organisations in Venezuela?

John McEvoy: Through the Freedom of Information Act, we found that the UK Foreign Office has given almost half a million pounds to an anti-government coalition in Venezuela. This money was funnelled via the Conflict, Stability and Security Fund (CSSF), a controversial 'aid' budget which purports to support development abroad. However, in the past, this fund has been linked to privatisation schemes and supported human rights abusers.  It is ironic that the Foreign Office was not transparent about funding an anti-corruption, 'transparency' initiative in Venezuela, a country which the UK has an interest in removing its government, while the UK doesn't appear to support any anti-corruption initiatives in friendly, and massively corrupt, Gulf states.

Sputnik: Who are the main players involved in this latest revelation of yours?

John McEvoy: Obviously the Foreign Office is the key player, but the individuals on the receiving ends of the funding in Venezuela are interesting. Yonaide Sanchez is the national coordinator of the 'coalition anti-corruption', funded by the Foreign Office, in Venezuela. She has been an outspoken critic of the Venezuelan government and also a keen supporter of Venezuelan opposition figure Juan Guaido. The coalition anti-corruption is apparently a dual project by the British government and Transparency International's Venezuelan chapter, Transparencia Venezuela. The co-founder and director of Transparencia Venezuela, since its founding in 2005, is Mercedes de Freitas.

De Freitas has founded and directed a number of Western governmental-funded operations in Venezuela over the past two decades - notably since Hugo Chavez was first elected in 1998. Namely, these operations were funded by the National Endowment for Democracy (NED), which has been behind numerous civil society organisation destabilisation efforts in Venezuela. In 2002, during a US-backed coup attempt against Chávez, de Freitas emailed the NED to show her support for the regime change effort. So there's a strong link between the Foreign Office and figures in Venezuela who have a keen interest in overthrowing the present government.

Sputnik: How do we know the coalition being funded isn't actually about exposing corruption?

John McEvoy: I don't doubt it's dedicated to fighting corruption, but it seems almost uniquely targeted at the Venezuelan state, while numerous other figures - not least Juan Guaidó - are deserving subjects of investigation and attention. This is how noble causes - such as fighting corruption or battling for greater democratic procedures - end up, in a structural sense, functioning in the opposite sense to which they're dedicated. If we situate this anti-corruption coalition within a wider sense of foreign-sponsored destabilisation efforts, then it might superficially be about targeting corruption, but it operates as something more cynical in a wider context.

Sputnik: Why should it matter if the UK FCO is funding transparency and anti-corruption groups in Venezuela?

John McEvoy: It's important to know what our government is doing abroad in our name. This is especially important given the wider context: for over two decades, Western governments have had a keen interest in removing the Venezuelan government.

It's clearly, to some degree, about oil (Venezuela has the largest proven oil reserves in the world), but it's also about ironing out the 'symbolic threat of a good example' in the global south. Chávez thought it important to distribute Venezuela's vast resources among the country's general population, and this, historically, has been totally unacceptable to the US and secondary imperial powers like the UK - especially in Latin America. Like Bolivia under Morales, Brazil under Lula, Ecuador under Correa, et cetera, any experimentation with redistributing wealth after historic structural inequities is crushed by coups, economic asphyxiation, diplomatic pressure, et cetera. The anti-corruption coalition in Venezuela sits within this context.

Sputnik: To what extent is this story related to your previous revelation that the UK FCO established a Venezuela Reconstruction Unit?

John McEvoy: It's directly related in that the Foreign Office is the motor behind both issues. We also know that the British embassy in Caracas has been promoting 'transparency' in Venezuela for some time, at times meeting with Guaidó to discuss the issue. It's also related in that both operations were occurring in almost total secrecy.

Sputnik: The UK FCO originally resisted freedom of information requests filed by you on this subject. But you were ultimately able to obtain information from them. What was their reason for initially refusing your requests doing so and what changed?

John McEvoy: You'd have to ask them. The [Freedom of Information Act] is operated almost totally arbitrarily by governmental departments, such that it's effectively not fit for purpose. We were told that revealing the sources of DFID funding in Venezuela would compromise the 'health and safety' of those involved in its activities. The 'public interest' threshold was acknowledged, in that the British public deserves to know what on earth our government is up to in that country, but this 'public interest' was not sufficient to justify the release of information when weighed against the 'health and safety' concerns. If that doesn't seem to make sense, it's because it doesn't. Getting information about the UK's activities in Latin America (and I imagine elsewhere) is like trying to draw blood from a stone.

I was recently informed that the Public Records Office had 'destroyed' all its files on monitoring the Chile Solidarity Campaign during the 1970s since it wasn't deemed sufficiently of public concern to keep. So there are loads of issues: does the public have any democratic control over who is deciding what is in our interest? Who is in charge of the declassification process? How do we ensure officials aren't using exemptions within the FOIA arbitrarily withhold information that the public has a right to know about? In many senses, the UK is much more closed on these issues than even the US (you can FOIA the CIA, but not the UK SIS, for instance).

Sputnik: Explain the relevance of the UK ambassador being labelled as 'strictly protect' in a US diplomatic cable revealed by WikiLeaks.

John McEvoy: According to this WikiLeaks file, the current UK ambassador to Venezuela, Andrew Soper, was a former 'strictly protect' informant to the US. Given the political context in Venezuela, in which the US and UK governments seem to be keenly promoting regime change, it would be worthwhile knowing what Soper's present relationship with the US government is: is he still sharing sensitive information with them? This is also important given the UK is one of the few countries that has maintained diplomatic relations with the Venezuelan government (maintaining an embassy there, and maintaining an ambassador in the UK), despite effectively trying to overthrow its government.