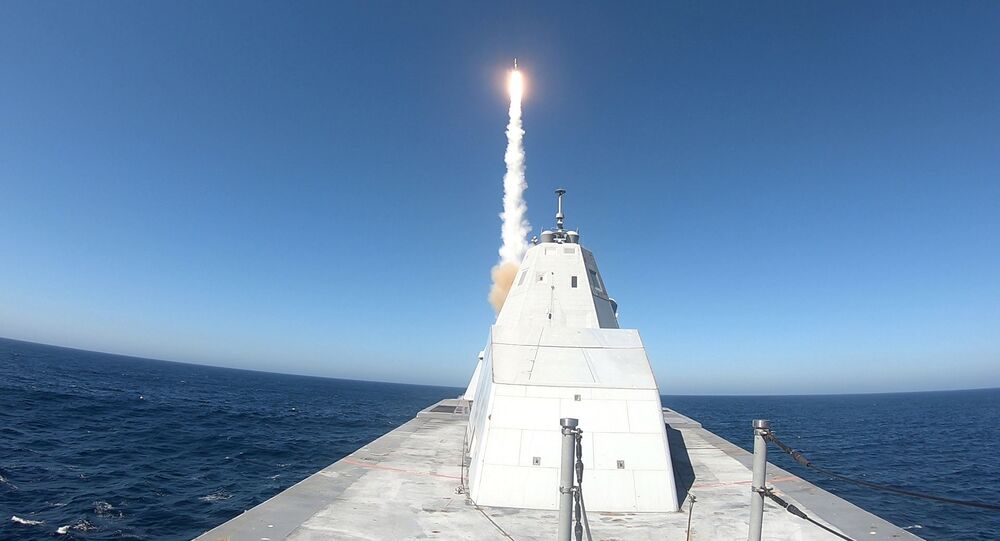 The US Navy’s stealthy destroyer, the USS Zumwalt, has fired a missile for the first time ever, the service announced on Monday.

According to the Navy, the Zumwalt fired a Standard Missile 2 (SM-2) anti-air missile off the coast of Point Mugu, California, on October 13. The Zumwalt is the world’s largest destroyer, but until earlier this year had no working armament; it only fired its 30-millimeter Bushmaster deck guns for the first time in May.

“Today’s successful test not only demonstrates the ship’s capability to fire missiles and conduct self-defense, it is also a significant step toward more advanced combat system testing and operations for our Navy’s most technically innovative warship,” Capt. Matt Schroeder, program manager of the Zumwalt program, said in a Monday news release.

“The USS Zumwalt crew and Surface Development Squadron One are working hand-in-hand with the acquisition community to advance this ship’s operational capability.”

In the 1990s, the US Navy envisioned a massive new coastal bombardment warship to take the place of its destroyers as well as the massive Iowa-class battleships that were once again being retired. The Zumwalt-class was a scaled-down version of that dream, albeit initially still capable of heavy bombardment with two quick-firing heavy deck cannons as well as more than 130 vertical missile launch tubes. However, budget cuts soon eliminated the guns, and the Navy struggled for years with the question of what to do with the ship.

Now, instead of nearly three dozen stealthy destroyers, the US Navy has just three ships in the Zumwalt-class: the USS Zumwalt and USS Michael Monsoor, both of which are active in the Navy, and the USS Lyndon B. Johnson, which is still fitting out.

The SM-2 is set to become one of the Zumwalt’s primary weapons, meaning it will be performing a more typical missile destroyer role like the Navy’s Arleigh Burke-class ships, although about one-third larger. However, it will also pack other, smaller weapons like the RIM-162 Evolved Sea Sparrow anti-air missile. Eventually, the Zumwalt will also receive Tomahawk cruise missiles and other long-range strike weapons.

Sputnik recently reported that the Navy was considering replacing one of the two radars initially planned for the Zumwalt that would have given it extremely long-range search capabilities, but which was also cut in the name of trimming budgets.

According to the release, the Navy hopes to have the Zumwalt ready for its first patrols in 2021.