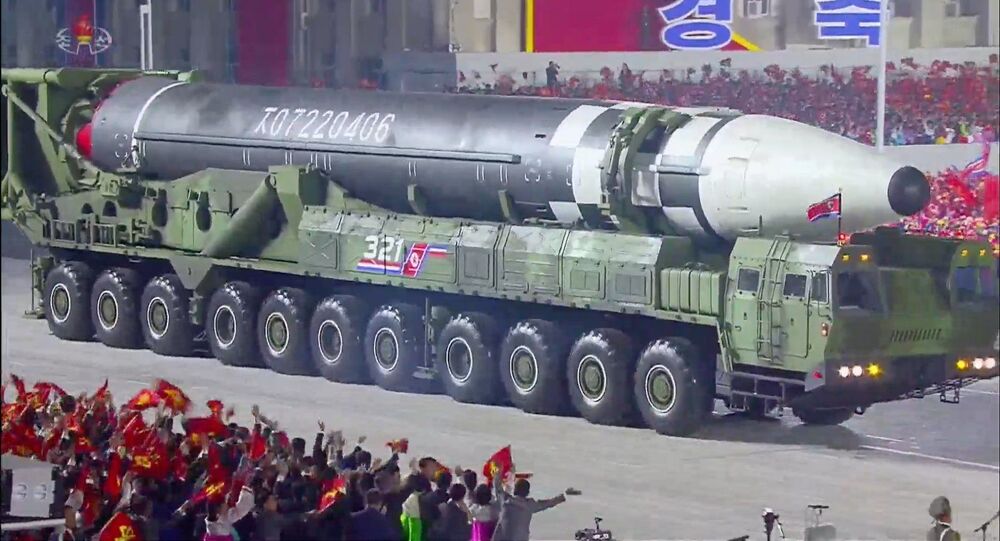 North Korea carried out a test of what was thought to be its longest-range intercontinental ballistic missile, the Hwasong-15, in November 2017. With a range of 13,000 km, the nuclear-capable missile could theoretically hit anywhere inside the US. In July 2019, US Forces Korea confirmed the missile’s potential.

Korean Central Television has broadcast footage of what appears to be a new, never-before-seen intercontinental ballistic missile at a pre-dawn military parade dedicated to the 75th anniversary of the founding of North Korea’s ruling Workers’ Party.

Four of the missiles were shown being carried aboard transporter-erector vehicles equipped with 11 axles, which is two axles more than the nine-axle transport erector launcher previously photographed carrying the Hwasong-15 nuclear-capable ICBM.

The missile system was one of dozens of weapons on display at the parade, which also featured everything from tanks and mobile artillery to coastal defence systems, long-range artillery, air defences and other nuclear-capable missiles, including the Pukguksong-3, a new solid fuel, submarine-launched ballistic missile.

In a speech at the event, North Korean leader Kim Jong-un emphasised that his country was building up its military capabilities as a deterrent, and  that Pyongyang would only strike in “retribution” to an enemy provocation.

The leader did not mention the US in his speech, but sent well-wishes to South Koreans, wishing them a swift recovery from the coronavirus pandemic, and praising his fellow countrymen and women for “protecting the country and themselves” from the virus.

Kim also called on North Koreans to remain steadfast in the face of “tremendous challenges” caused by crushing US sanctions, the need to take coronavirus precautions, and the devastating floods which have hit the country in recent weeks, and apologised for his failure to make good on promises to improve living standards. “I am ashamed that I haven’t been able to repay you properly for your enormous trust. My efforts and devotion were not sufficient to bring our people out of difficult livelihoods,” he said.

A senior US administration official who asked to remain anonymous told Reuters that the appearance of what appears to be a new ICBM was “disappointing,” and urged Pyongyang to continue negotiations to denuclearise the Korean peninsula.

© REUTERS / KCNA
North Korea Showing Favoritism to Trump by Delaying Tests of Growing Nuclear Arsenal - Analysts
Markus Garlauskas, a former US intelligence officer specialising in North Korea, expressed concern over the potential new ICBM's capabilities, asking “if the Hwasong-15 could carry a ‘super-large’ nuclear warhead to anywhere in the US, then the natural question is, what can this larger missile carry?”

North Korean and US officials have carried out several rounds of talks on the prospects of denuclearising the Korean Peninsula, with US President Donald Trump taking the unprecedented step of meeting Kim on several occasions. Notwithstanding the personal rapport established between the two men, the talks have not led to a halt in North Korea’s nuclear and missile programmes, with Washington refusing to lift sanctions against the country, reduce its military presence in South Korea, or halt drilling with the south unless Pyongyang denuclearises.