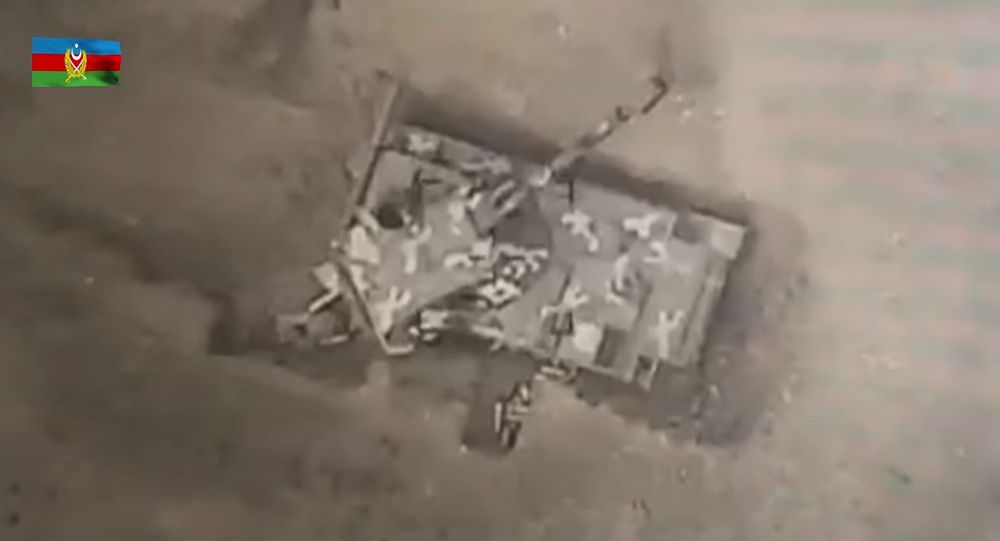 Sunday marked the seventh straight day of fighting in Nagorno-Karabakh between forces from the Armenian-backed self-proclaimed Republic of Artsakh and the Azerbaijani military. At least 36 civilians and hundreds of troops are thought to have been killed, with both sides also accusing each other of deliberately targeting populated areas.

The Armenian Artsakh Defence Army and the Azerbaijani Ministry of Defence have published new footage of artillery, air and missile strikes on one another’s positions and military equipment.

The Artsakh Defence Army footage shows attacks on Azeri positions, with large plumes of smoke seen rising from ruins and entrenched areas after being hit by artillery, and tanks crewed by Azerbaijani soldiers exploding after being hit, presumably by anti-tank missiles.

Russia, the United States, France, and the European Union have called on both sides to put a halt to the fighting immediately and to sit down for peace talks. Turkish President Recep Tayyip Erdogan has urged Azerbaijan to pursue the war to a victorious conclusion. On Saturday, Armenian Prime Minister Nikol Pashinyan alleged that 150 “high-ranking” Turkish military personnel were in direct command of Azerbaijan’s operations in Nagorno-Karabakh.

The latest disruption in the shaky peace between Artsakh Armenian and Azerbaijani forces in Nagorno-Karabakh began on September 27, when both sides accused one another of air and artillery strikes on each another’s positions.

© Sputnik / Iliya Pitalev
Live Updates: Azerbaijani Prosecutors Say 5 People Hospitalized After Mingecevir Shelling
The conflict over Nagorno-Karabakh has raged for over thirty years. In 1988, nationalist sentiments let loose during perestroika led ethnic Armenians living in the Nagorno-Karabakh Autonomous Region of the Azerbaijan Soviet Socialist Republic to accuse Baku of discrimination and to try to secede and join the Armenian Soviet Socialist Republic. Baku attempted to prevent the exclave’s secession, and in late 1991, on the eve of the USSR’s collapse, abolished the region’s autonomous status.

From 1992-1994, Armenian militias and Azerbaijani forces waged a full-scale war in the region, leading to the deaths of over 40,000 soldiers, militiamen and civilians from both sides. In addition, the conflict prompted nationalists on both sides to carry out pogroms and ethnic cleansing attacks on minorities living in both republics, with over 1.1 million ethnic Armenians and Azerbaijanis forced to flee their homes and communities. A ceasefire facilitated by Moscow was signed in 1994 and managed to stop the bloodshed, but has been repeatedly broken by both sides in the years that followed.