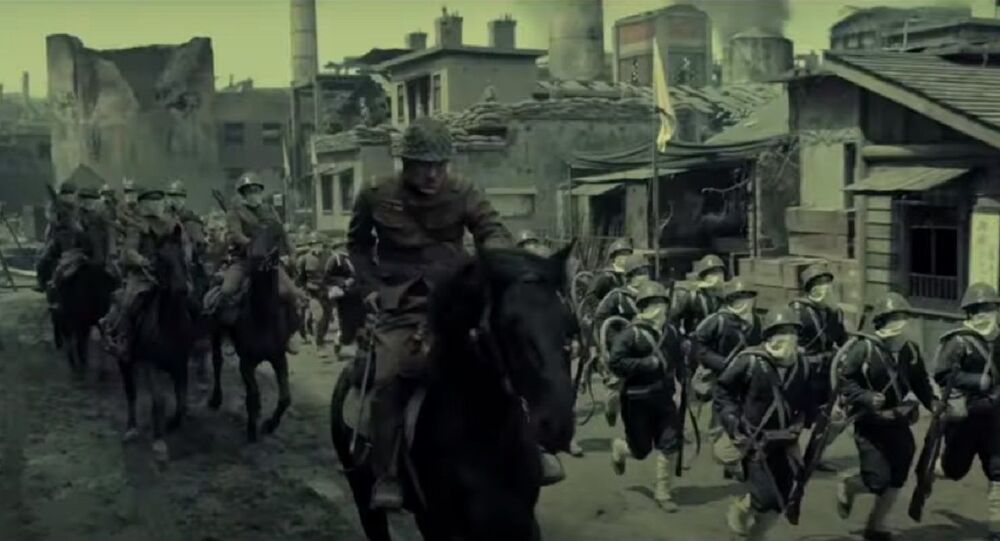 The Eight Hundred has taken three billion yuan ($440 million) in takings at the box office, making it one of China’s most successful ever films. The film is based on an infamous battle for a Shanghai warehouse between Chinese and Japanese soldiers.

The Eight Hundred has become not only the most successful film in China since cinemas reopened in July but among the top 10 all-time in the history of the People’s Republic.

The real-life battle in 1937 on which it is based was between invading Japanese soldiers and around 800 men from the nationalist Kuomintang (KMT).

After the Japanese surrender at the end of the Second World War the KMT fought and lost a civil war against Mao Zedong’s communist forces and ended up fleeing into exile in Taiwan, where the Republic of China remains in existence.

The film’s premier in June was postponed after Chinese film censors edited some scenes to remove one particular scene in which the KMT soldiers defend the red, blue and white flag of the Republic of China on the roof of the Sihang warehouse.

The success of the film suggests movies based on famous battles are as popular in Asia as they are in the rest of the world. So what are the five best movies based on real battles?

Rod Steiger played Napoleon Bonaparte and Christopher Plummer was his nemesis - the Duke of Wellington - in Sergei Bondarchuk’s classic.

Bondarchuk, one of the greatest film directors to emerge from the Soviet Union, had adapted Tolstoy’s War And Peace for the cinema four years later.

Steiger narrates the film - as if musing on Napoleon’s internal thoughts - but it is the battle scenes, filmed with 15,000 extras from the Red Army, which made the film memorable.

Sadly it did not do that well at the box office, forcing Stanley Kubrick to call off his own planned Napoleon biopic.

Clint Eastwood made two films about the battle of Iwo Jima in the same year.

While Flags Of Our Fathers was told from the American perspective, most film critics thought the better of the two films was Letters from Iwo Jima, which was set behind Japanese lines.

Ken Watanabe played General Tadamichi Kuribayashi, who led a force of 20,000 Japanese soldiers in a five-week long defence of the island of Iwo Jima against an assault by 110,000 US soldiers and Marines in the spring of 1945.

The exact fate of General Kuribayashi is unknown but in the final scene Eastwood shows him shooting himself rather than fall into enemy hands.

Kuribayashi's son, Taro, said later: "My father had believed it shameful to have his body discovered by the enemy even after death…he had wanted [his men] to bury his body there and then. Afterwards [US commander] General Holland Smith spent a whole day looking for his body to pay respect accordingly and to perform a burial, but in vain."

Gregory Peck and Rip Torn starred in Pork Chop Hill, which was based on a real life battle during the Korean War.

Martin Landau made his debut in the film and it starred several other young actors, including George Peppard and Harry Dean Stanton, who would go on to became famous character actors in Hollywood.

The film is based on two battles in 1953 in which a company of US infantrymen led by Lieutenant Joe Clemons - played by Peck - is sent to recover a hill from a Chinese force and then hold it against a Chinese counter-attack.

Lt Clemons’ lost 110 out of 135 men but thwarted the Chinese counter-attack, which only ended when a ceasefire ends the Korean War.

The film’s most famous scene is Henry V’s famous St Crispin’s Day speech to his men just before the battle of Agincourt in 1415.

What Henry V actually said to his troops that day is not known but Shakespeare gave him a famous, emotional speech which includes the immortal lines: "We few, we happy few, we band of brothers. For he today that sheds his blood with me shall be my brother, be he ne’er so vile, this day shall gentle his condition. And gentlemen in England now a-bed shall think themselves accursed they were not here, and hold their manhoods cheap whiles any speaks that fought with us upon Saint Crispin's Day."

The English won the battle and the French lost 6,000 men but Agincourt was merely one in a series of confrontations during the Hundred Years’ War, which England ultimately lost.

In September 1941 the invading German army encircled Leningrad - what is now St Petersburg - and tried to force the city to surrender.

Thousands of women and children were evacuated in the first few days of the siege and the 2019 movie Battle of Leningrad focuses on one of the most dramatic episodes.

On the night of 16/17 September 1941 hundreds of civilians packed onto Barge 752, which set off across the freezing waters of Lake Ladoga, north-east of the city.

The barge was repeatedly bombed by the Luftwaffe and eventually sank. Only 200 or so survived, after being rescued by another boat.

The siege was finally lifted on 27 January 1944 as the Wehrmacht pulled back from Leningrad and began its long retreat.