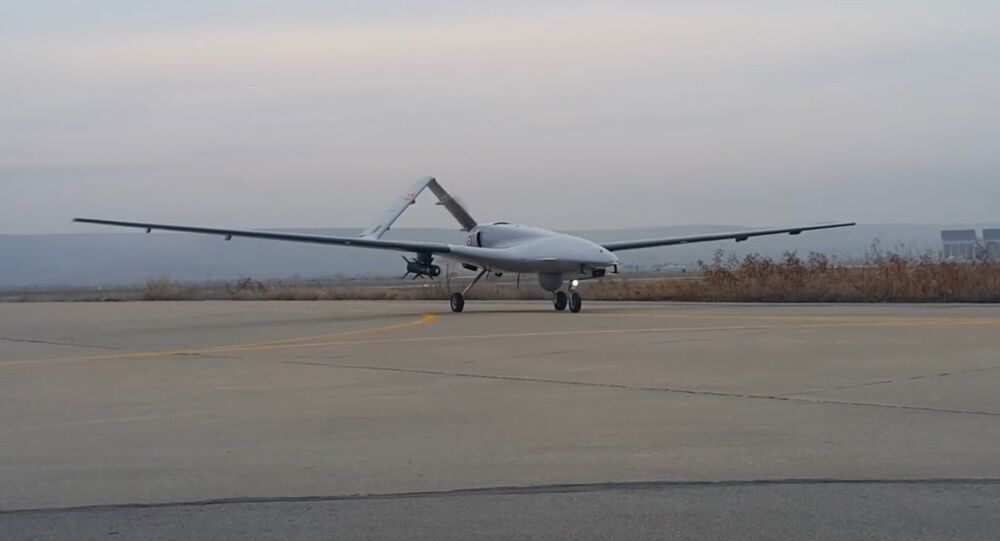 The Nagorno-Karabakh region has been disputed between Armenia and Azerbaijan since the late 1980s, when the two nations were Soviet republics. Since the end of the Nagorno-Karabakh War in 1994, the two sides have held peace talks mediated by the OSCE Minsk Group.

Residents of the Gegharkunik province in Armenia have filmed the wreckage of an alleged Turkish-made "Bayraktar" drone, believed to have been used by Azerbaijani forces, scattered across a field.

The drone is said to have been downed by the Armenian Armed Forces on Sunday near the city of Vardenis.

Earlier in the day, Armenian Ambassador to Russia Vardan Toganyan said that around 30 Armenian servicemen had been killed and 100 others injured in clashes in Nagorno-Karabakh. In the meantime, the Azerbaijani side has declared a partial mobilisation of reserve servicemen.

Azerbaijani Defence Ministry
Macron Expresses Concern Over Nagorno-Karabakh Crisis in Phone Talks With Azerbaijani President
Violent clashes broke out in the disputed region of Nagorno-Karabakh in the early hours of Sunday morning. Both the Azerbaijani and Armenian sides have accused one another of shelling civilian settlements.

On Sunday evening, the Armenian Defence Ministry said that 16 of its servicemen had died in the clashes, and the government in Yerevan has declared martial law and a full-scale mobilisation.

The international community, including Russia, has urged all parties in the region to cease firing and negotiate to end the violence.