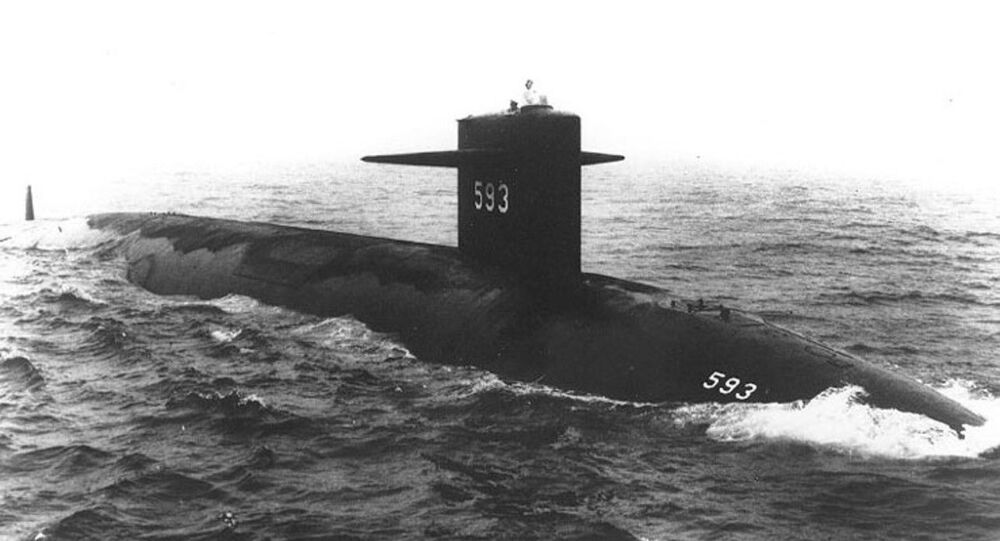 After a monthslong delay, the US Navy has released its first batch of unclassified probe documents tied to the 1963 implosion of the USS Thresher (SSN-593), which killed all 129 shipyard personnel and crew aboard.

Wednesday marked the long-awaited release of the first 300 documents from the Navy probe into the April 10, 1963, implosion of the first-in-class, nuclear-powered Thresher, the Associated Press reported.

The test dive event, classified as the deadliest submarine disaster in US history, took place some 220 miles off the coast of Cape Cod in Massachusetts after the commanding officer gave an evaluation of the vessel, greenlighting additional construction at the Portsmouth Naval Shipyard in Kittery, Maine.

However, he did voice concerns about the nuclear submarine’s complexity and possible vulnerabilities within its auxiliary salt water system.

“He stated, ‘In my opinion, the most dangerous condition that exists in Thresher is the danger of salt water flooding while at or near test depth,’” the Navy report said.

According to the released, redacted documents, the crew aboard encountered what is believed to be their first “minor difficulty” after descending more than 800 feet (244 meters) below the surface. A garbled message from the personnel detailed that the crew was attempting to empty the nuclear submarine’s ballast tanks in order to return to the surface.

Moments before the Thresher disintegrated, Navy personnel in a rescue ship overheard details about “test depth” from the submarine’s crew. Despite the passing of nearly six decades, the Navy moved to not include details related to the test depth in its Wednesday release.

“The loss of Thresher was a defining event for the submarine service,” said Rear Adm. William Houston, director of the Undersea Warfare Division, N97, in the Office of the Chief of Naval Operations, as reported by AP.

Sputnik reported in February that US District Judge Trevor McFadden had ordered the Navy to finish an internal review of 300 documents regarding the Thresher disaster by April 30 and publicly release the redacted versions to the public by May 15.

The district judge also required the service to continue reviewing the estimated 3,600 total documents in batches of 300 and release a new batch on the 15th of each month.

“Normally, I defer to the government, but I can’t say I have a lot of confidence in how this looks now,” McFadden said at the time, also ordering the Navy to provide a status report on the documents every 60 days.

However, the ongoing COVID-19 novel coronavirus pandemic allegedly delayed the release of the documents.

Retired Capt. James Bryant, who was a commander of a Thresher-class submarine, initially requested the release of the documents under the Freedom of Information Act. After that move proved ineffective, he took the matter to court, arguing that there was information those in the service could learn from the then-completely classified documents.

According to the service’s analysis, the released documents offer no explanation for the sinking of the vessel, which rests on the ocean floor at a depth of 8,500 feet (2591 meters).