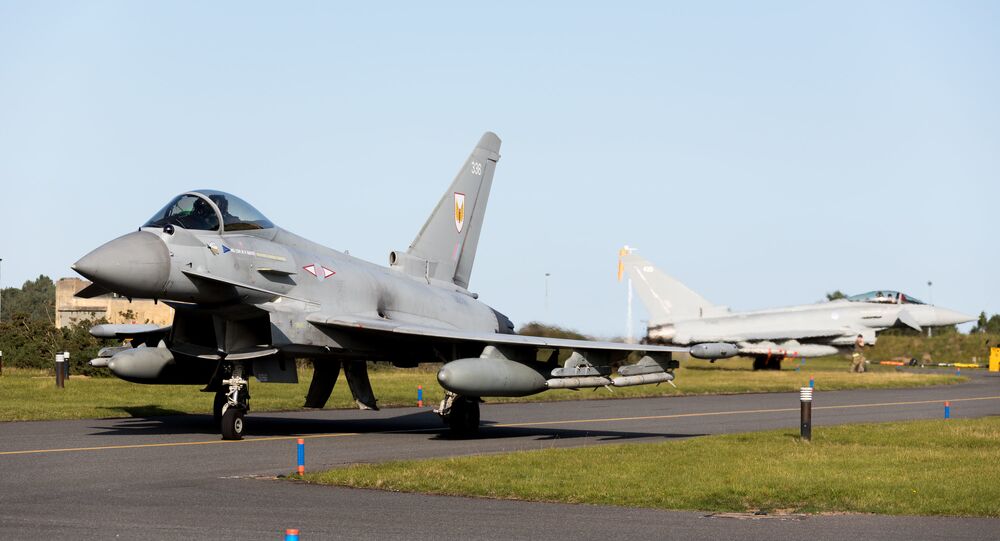 The Russian military began a series of flights over neutral waters in the Barents, Norwegian and North Seas, as well as the Atlantic Ocean earlier this month, with the flights including operations by Tu-142 maritime patrol aircraft and Tu-160 strategic bombers. The flights come amid a sharp increase in NATO air activity along Russia’s borders.

🔎 While their every move is monitored, there are serious flight safety implications for the Bears flying in this area.

According to the RAF, the intercept, which took place on Thursday, was the third time jets were scrambled from the base during the past week.

The Typhoons were said to have taken to the skies after the Russian planes entered NATO’s so-called ‘area of interest’, which includes not only British air space but chunks of neutral airspace around it as well.

The RAF says the Tu-142s, NATO designation ‘Bear F’, continued to be tracked as they flew over the North Sea, with a NATO Boeing E-3A Sentry airborne early warning and control plane flying out of Geilenkirchen Air Base in Germany diverted from training and tasked with tracking the Russian aircraft, and an Airbus A330-200 tanker from RAF Brize Norton in England engaged to fuel up the Typhoons midflight.

🧭 This mission was closely monitored by the Control & Reporting Centre at @RAFBoulmer, and a @NATO E-3A from Geilenkirchen Air Base which was re-tasked from a training mission.

📡 It extended radar coverage and provided tactical command and control during the mission.

The Royal Norwegian Air Force reportedly took over the monitoring of the Tu-142s after they left the UK Flight Information Region.

Thursday’s flight follows a separate, 10-hour mission on Monday by a pair of Russian Tupolev Tu-160 strategic bombers from the Barents Sea to the Atlantic Ocean through the Norwegian Sea. During that flight, the bombers were escorted for part of the trip by a Russian Navy MiG-31, and trailed by F-16 fighters of the Royal Norwegian Air Force.

Two Tu-142s from Russia’s Northern Fleet carried out flights over neutral waters of the Barents, Norwegian and North Seas last Saturday as well, with foreign jets said to have shadowed them for part of that trip.

Russian Defence Ministry
Russian Fighters Scrambled to Intercept 3 US Bombers Over Black Sea, Defence Ministry Says
The Russian military has increased its aerial activity in the region after reporting a major rise in NATO activity along its maritime borders in the Baltic, Black, and Barents Seas, as well as the Sea of Okhotsk, the Sea of Japan and the Bering Sea, with multiple British Royal Air Force planes among the bombers, spy planes and reconnaissance drones detected, tracked and intercepted by Russian fighter jets. Last week, Moscow reported detecting some 41 foreign military aircraft engaged in reconnaissance activities close to Russia’s airspace over a seven-day period beginning 4 September.
...
Reddit
Google+
Blogger
Pinterest
StumbleUpon
Telegram
WhatsApp
102