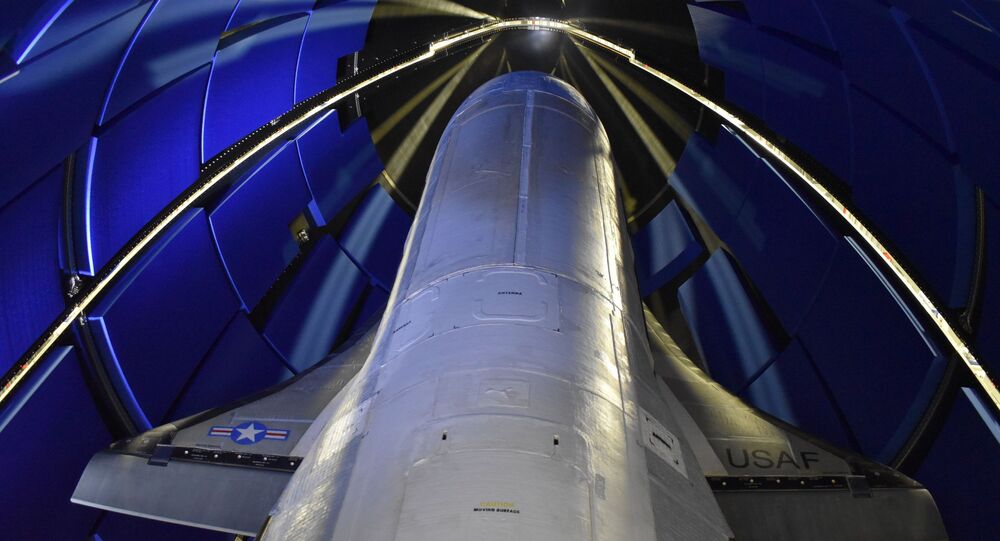 A newly unveiled video gives a peek inside the cargo bay of the US Air Force’s X-37B spaceplane, about which the service has said extremely little.

The veil surrounding the Pentagon’s secretive, new spaceplane got pulled back just a little bit on Tuesday when a clip from a Boeing promotional video showing the X-37B’s cargo bay doors opening appeared on social media.

I cropped the Boeing video a bit to show the X-37B deployment sequence a bit better, I hope @BoeingSpace releases the full video :) #X37B pic.twitter.com/jMrj7HZWZS

​The short clip was taken from a promotional video shown by Boeing Space at the Air Force Association’s annual convention, according to Twitter user DutchSpace.

In the clip, the large bay doors on the Space Shuttle-like craft open, and a pair of snugly-packed solar panels is deployed from inside. According to The Drive, this is the first time the craft’s interior has been viewed, giving a little more of an idea about what can fit inside the reusable spaceplane.

So @BoeingSpace just released a video for the AFA ASC 2020 conference and guess what it has ? yup, X-37B video opening its payload bay doors, both on ground and on-orbit, video coming in the next post, but this still I have to share :) #X37B h/t to @ShuttleAlmanac @rachelkaras pic.twitter.com/oTMAz342j6

​The entire craft is just 29 feet long - small enough to fit inside the Space Shuttle’s cargo bay - and the X-37B’s cargo bay is said to be about the size of the bed of a large pickup truck. It’s unclear what exactly could be put inside such a tiny space, but rumors abound regarding microsatellites, anti-satellite weapons such as microwave emitters or particle beams and various experiments. In the past, little has been said about the X-37B’s missions, but in 2015, the Air Force did say the spaceplane was testing an experimental ion thruster as well as carrying up and back a slew of materials, the effects of space travel and exposure on which NASA was interested in observing.

The Pentagon’s reticence continued with the X-37B’s sixth mission launch in May, saying only that it was carrying experiments of interest to NASA and the US Naval Research Laboratory, Sputnik reported at the time.

The X-37B is not the world’s first spaceplane, as the US Space Shuttle flew for many years before retiring in 2011. The Soviet Union built an analogue of the Space Shuttle, the Buran, but it only made one unmanned space flight in 1988 before the collapse of the USSR ended the program. Earlier this month, China launched its own reusable spaceplane for the first time, although next to nothing is known about its properties or its mission, apart from that it launched and returned successfully. Several commercial spaceplanes are also being developed, including by Virgin Galactic.