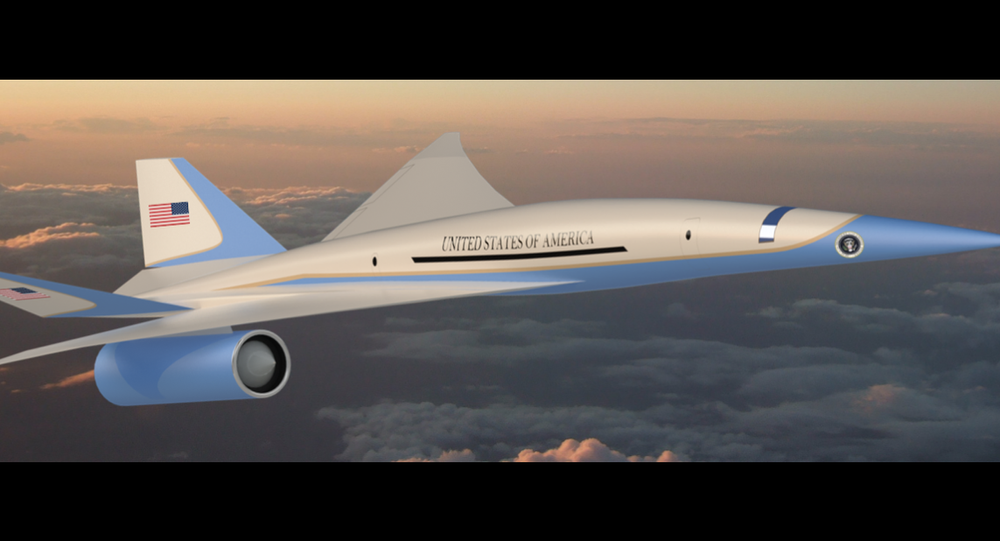 The US Air Force has begun the process of developing a new supersonic executive aircraft that would replace the president’s Air Force One passenger jet. The effort parallels a plan for a hypersonic Air Force One, but even as both push forward, plans to upgrade the existing Boeing 747s have still not been completed.

Aerospace startup Exosonic announced on Tuesday it had received a $1 million award from the US Air Force’s Presidential and Executive Airlift Directorate to begin designing a supersonic executive jet with low-boom technology.

The jet will be an adaptation of Exosonic’s existing efforts to develop a supersonic passenger airliner, with the company noting in a news release that the contract will help it “develop and modify” the jet “to serve as an executive transport vehicle. These modifications will include reconfiguring the aircraft cabin to include the required accommodations, communications equipment, and security measures that allow US leaders and their guests to work and rest onboard the aircraft.”

“Exosonic’s aircraft can provide top US leaders and diplomats rapid transportation around the world to meet with world leaders or react to developing situations on the ground,” the company said. “By utilizing Exosonic's boom softening techniques, the passengers can travel overland and overwater at supersonic speeds, pending regulations, to roughly reduce their cruise times in half compared to existing aircraft.”

On its website, Exosonic notes its design team has a bevy of experience with successful and innovative aircraft designs, ranging from the Lockheed Martin F-22 Raptor to the Rockwell B-1B Lancer and, most relevant to the present contract, the X-59 QueSST experimental plane being built by Lockheed and the US space agency NASA to test low-sonic-boom designs.

Concept art on Exosonic’s website for its proposed Mach 1.8 airliner closely resembles the design of the X-59, which is expected to finish construction and be put in the skies in 2021, with actual tests beginning in 2022, according to a NASA timeline.

NASA announced late last month it had taken delivery of the X-59’s single, massive engine from General Electric. However, Raymond Castner, the propulsion lead for the X-59 at NASA’s Glenn Research Center in Cleveland, Ohio, cautioned in the news release that “neither the X-59, nor this particular engine, are prototypes for a future commercial supersonic airliner.”

“This hardware is just for proving the airplane can produce quiet sonic thumps and measure community response,” he said. Typically, when an object’s speed passes the speed of sound, the sound waves compress in front of it as it flies, creating a hard “sonic boom” that can damage hearing as well as windows or, at the very least, the nerves of folks within earshot.

The Exosonic project parallels another advanced project announced last month that aims to produce a hypersonic Air Force One, which would travel more than five times the speed of sound, or more than twice as fast as Exosonic’s plane.

The Air Force granted another aerospace startup, Hermeus Corporation, a $1.5 million contract to, like Exosonic, figure out how it can modify its existing plans for a hypersonic commercial airliner to suit the US president’s needs. The company tested its Mach 5-capable advanced combined cycling engine earlier this year.

At such speeds, the hypersonic jet could sprint from New York to London in about 90 minutes. By comparison, a standard, subsonic passenger flight between the two cities takes about seven hours; however, Exosonic’s supersonic jet could make the trip in about four.

Meanwhile, updated versions of the existing Air Force One jets, which are modified Boeing 747s, are yet to be delivered, and US President Donald Trump is still flying around in jets that date to 1987.

The Air Force contracted Boeing in 2016 to modify two 747s originally intended for a Russian airline company. The lengthy modification process, which converted the 747-8s into what the Air Force calls VC-25Bs, has involved removing and replacing the aircraft’s commercial passenger interior as well as its engines, its auxiliary power units and "numerous secondary system components." Recently, Boeing has been "cutting out large skin and structure areas in both the forward and aft lower lobes of the aircraft and then installing two newly manufactured superpanels," according to an Air Force release in March. The two planes are expected to be delivered next year.