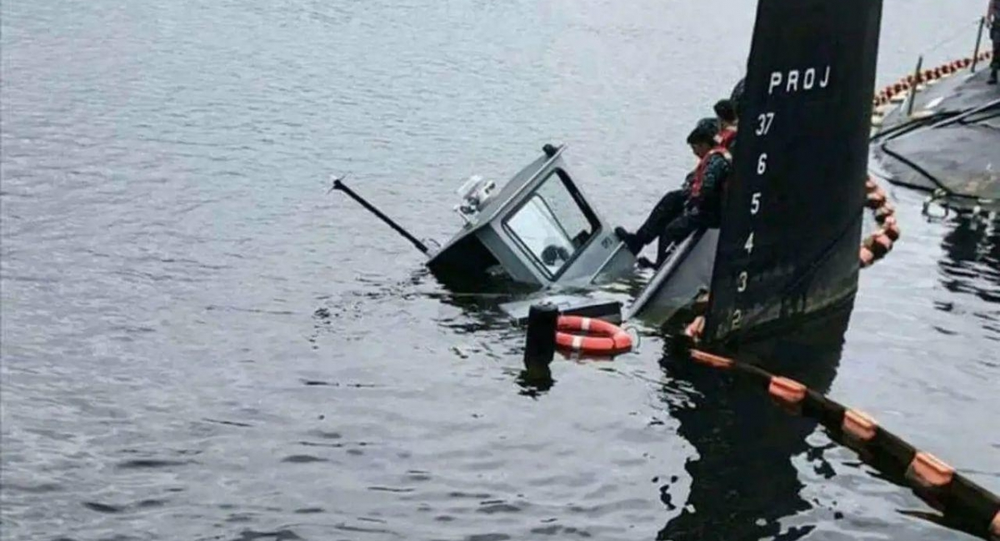 The tiny tugboat, adoringly dubbed a ‘Tuggernaught’, the ‘Ford F-150’ or ‘the one-celled ship from the game Battleship’ by fans on Reddit, was recently written about by several media outlets amid explosive online interest.

A Boomin Beaver-class tug from the tiniest series of ships in the US Navy, has sunk after colliding with a nuclear submarine, an internet photo shared by security and defence blog Avia-pro.net appears to show.

The image show the 19 foot (5.8 meter) long, 10 feet (3 meter) wide shiplet, which has a draught of just five feet (1.5 meters), taking on water after colliding with the tail of a nuclear submarine, as several sailors sit on top of its bow in lifejackets.

The mini-tug in the photo does have a few parts on the roof of its bridge which differ from other Boomin Beavers, lacking its searchlights and having a different horn mechanism. The tug’s vertical exhaust pipe is also different, and it appears to lack the all caps ‘US NAVY’ writing at the front of its bridge.

It’s not clear when the photo was taken, and the Navy has made no comments about the alleged incident.

The Boomin Beaver series of tuglets makes regular appearances on social media and forums from time to time, with curious users making inquiries about the cutesy tootsy vessel and what purpose it could possibly serve.

Last week, Popular Mechanics published a detailed article on the tug. Turns out its purpose is to deploy underwater security fencing and tow small ships. The tugs were originally built by shipbuilders in Washington State for loggers to tow logs through waterways, but they were also eventually purchased by the Navy, and deployed at bases including the Point Loma Submarine Base in California, Naval Base San Diego, the USS Constitution Museum in Boston Harbor, and Naval Base Kitsap Bangor in Washington. Similar tugs have been spotted at Norfolk Naval Station in Virginia and Kings Bay, Georgia.

The tug caused an explosion of interest on Reddit after someone asked to identify it last week, with users posting endless jokes about it and proposing a number of size-appropriate names, including the ‘USS Smol’, ‘Tuggy McTugface’, the ‘USS Cutie’, ‘Pail Blart – Water Cop’, the ‘S.S. Minnow’ and ‘Admiral Pea’.

Multiple other users made jokes about the Navy’s largesse, with one quipping that “it looks small but that thing has a crew of 6,000 sailors and costs $2 billion.”