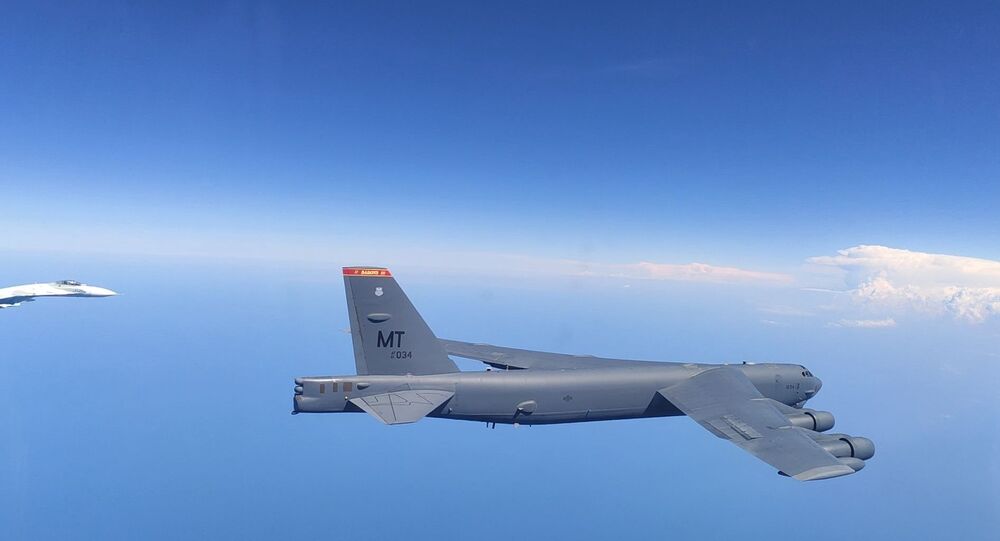 A video of an Su-27 fighter intercepting a US Air Force B-52H strategic bomber over the Black Sea has been published online on the US Defense Visual Information Distribution Service website.

The footage, captured by Staff Sgt James Cason of the US Air Forces in Europe and Air Forces Africa Public Affairs, shows the Russian fighter jet approaching the bomber and flying in front of the plane.

"The Russian pilots flew in an unsafe and unprofessional manner while crossing within 100 feet (30 metres) of the nose of the B-52 multiple times at co-altitude and while in afterburner causing turbulence and restricting the B-52’s ability to maneuver", the US Defense Visual Information Distribution Service claims.

According to the Russian Defence Ministry, the Su-27 fighter was flying at a safe distance "in accordance with international rules for the use of airspace".

​General Jeffrey Harrigian, commander of the United States Air Forces in Europe and Africa, said that such behaviour is reckless and incompatible international flight regulations.

"Actions like these increase the potential for midair collisions, are unnecessary and inconsistent with good airmanship and international flight rules. While the Russian aircraft were operating in international airspace, they jeopardised the safety of flight of the aircraft involved. We expect them to operate within international standards set to ensure safety and prevent accidents", he said.

Russian Colonel General Nikolai Antoshkin has commented on the accusations made by the commander of the US Air Forces in Europe and Africa against the Russian pilots intercepting the US bomber.

"Our pilots always prove their professionalism in conflicts, it is always visible, and intercepting, approaching the plane is the simplest, an elementary task. They found it, designated it, it flew up, gave signals, maybe something else, there is no need for special skills", he said.

The colonel general also noted that the Russian pilots are well trained and that the aircraft they used, the Su-27, are easy to fly, so it is "very easy" to intercept a bomber with their help. According to Antoshkin, the Americans are constantly trying to "hang" responsibility on Russia for various incidents.

After the foreign military aircraft turned away from Russia's state border, the Russian fighters returned safely to their home airfield.

For several weeks now, the Russian Defence Ministry has been reporting US aircraft approaching Russia's borders in the airspace over the Black Sea and Baltic Sea. The reconnaissance aircraft and bombers have subsequently been intercepted by Russian Su-27 fighter jets.

The military’s official newspaper, Krasnaya Zvezda, reported on 28 August that just last week, the Russian Armed Forces had detected 38 foreign jets that were engaged in reconnaissance activities close to the country's airspace.