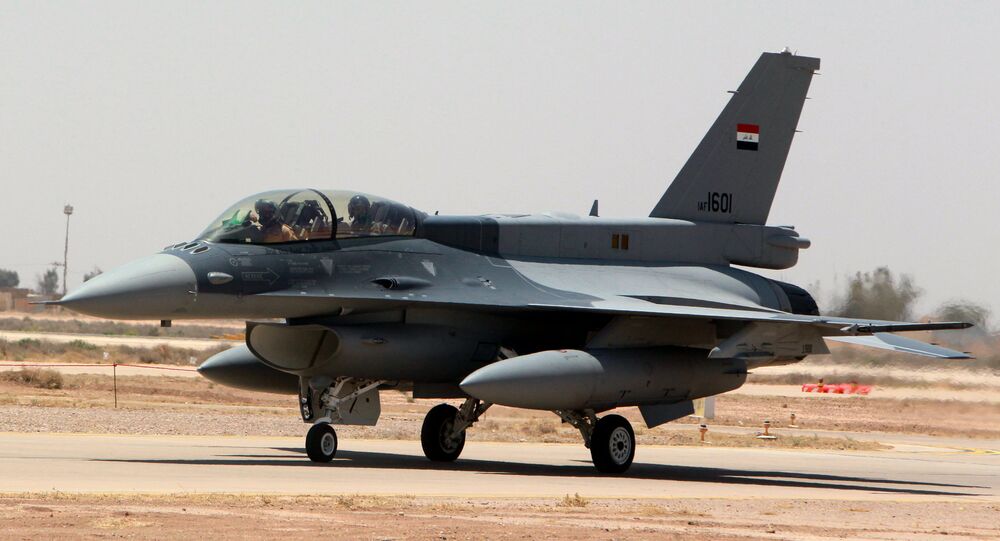 Iraq’s 2011 deal with the US to acquire US F-16 fighter jets worth a total of about $3bn (£1.9bn) was seen as potentially propping up Iraqi military capacity and providing the basis for the country’s air defences against external threats.

Close to a decade since a landmark $4.3 billion Lockheed Martin deal between Iraq and the US was signed to deliver F-16 fighter jets to the country, some Iraqi pilots claim, in unverified reports, that there is currently little to show for that investment, reports Fox News.

Furthermore, they are cited as fearing few among their ranks are combat-ready to take on another Daesh* wave or emerging threat.

According to two Iraqi Air Force pilots, speaking on conditions of anonymity, issues have emerged over the past months.

After the 3 January US assassination of Iran's top commander, General Qassem Soleimani in a drone strike in Baghdad, and retaliatory missile strikes against two US bases, Washington had withdrawn some contractors and troops from an array of locations, including the F-16’s home base at Balad, writes the outlet.

After indirect rocket fire from Iran-backed militias, according to the Pentagon, Lockheed Martin contractors withdrew from the base on 4-8 January 2020.

"… Lockheed withdrew its employees. However, all these planes [F-16s] need to be serviced and supervised… But because of a lack of parts, the Iraqi defense ministry started making its own parts and things, which is not allowed and effectively voids the warranty on them," one source was cited as saying.

It was claimed that many planes are currently grounded, with air force personnel allegedly poorly qualified regarding maintenance and that, in turn, signifies that Iraqi pilots “can't do their certification flights every month thus are rendered not combat-ready."

The situation was described as grave due to the F-16s presenting "essentially their strongest weapon against ISIS," which still frequently carries out attacks across the area of its previous "caliphate" that embraced territory in Iraq and Syria.

“So much wasted money. The planes are poorly maintained; it went from 18 to 20 airplanes fully combat-capable to only seven now," a source is believed to have said.

Concerns over the F-16s had previously been voiced by the Iraqi Oil Report that underscored "grounded jets serve as a prime example of expensive U.S. military assistance that has failed to create a meaningful Iraqi military capacity."

Regarding the recent reports, a US government official was cited by Fox News as saying Lockheed Martin is still working with the Iraqi air force and providing maintenance for the F-16s.

"The security assistance enterprise has been working diligently with our Iraqi partners to support their F-16 program," the official said.

A spokesperson for Lockheed Martin echoed the stance, insisting that the company "values the relationship and partnership we have with the Iraqi Air Force."

US Air Force/Staff Sgt. Luke Kitterman
An Iraqi F-16 Fighting Falcon fighter aircraft, assigned to the 9th Fighter Squadron, takes off prior to performing a Close Air Support Mission during Air Week at Balad Air Base, Iraq, June 17, 2019. The 9th FS conducted numerous CAS sorties that were controlled by Special Mission Controllers on the ground in support of Air Week.

In a statement posted on Facebook in July, Iraq's Ministry of Defense (MOD) dismissed claims of “flaws” in the F-16 accord.

"The F-16 jets continue to fly for training and combat missions even after the withdrawal of the American companies," the ministry said.

A spokesperson for the Iraqi air force was earlier quoted by the outlet as saying its top commander had visited Balad Airbase, and acknowledged that there were 19 F-16s, "all of them in good condition" and reliant currently on Iraqi technicians and experience.

Iraq signed the deal to purchase the first batch of 18 planes to bolster its air force and the country’s ability to defend its vast borders with Iran and other neighbors in 2011. This was followed by a second order of 18 jets in October 2012.

The first planes arrived in 2014, hailed by Baghdad’s envoy to the United States as a “new chapter” in efforts to enable the country’s air force stand on its own two feet.

After years of preparation & training in the U.S., Iraqi pilots today landed the 1st squadron of Iraqi F16s in #Iraq. pic.twitter.com/nyOvnJ5Djt

"Iraq needs to build its air force and to depend on its own capabilities to defend the skies instead of asking other countries to do so - especially if we know that the US forces will leave at the end of this year," Iraqi government spokesman Ali al-Dabbagh was quoted as saying after the purchase was agreed on.