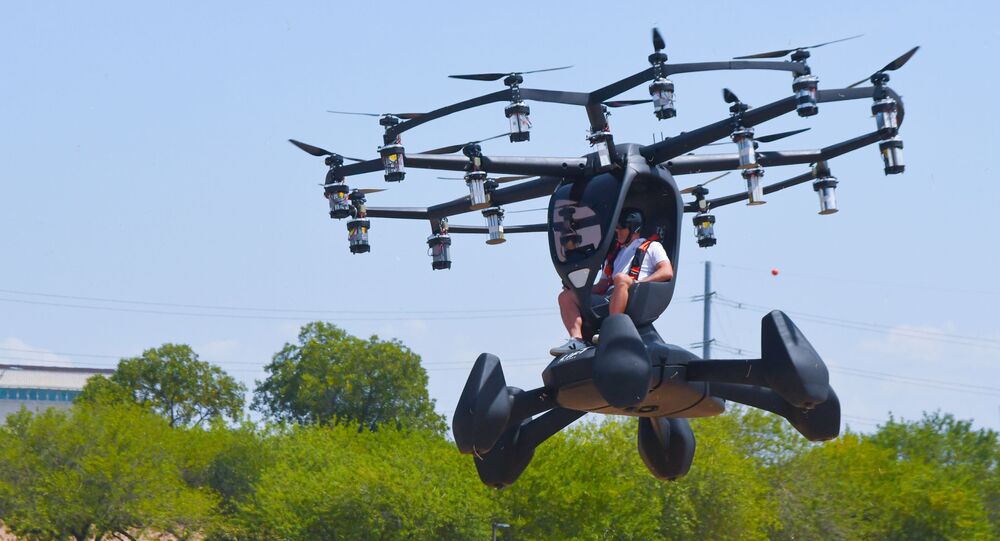 US Air Force brass gathered last week to watch a flight demonstration of an electric-powered flying car capable of vertical takeoff and landing. The news comes after New Hampshire became the first US state to establish regulations for flying cars.

During the test flight, LIFT chief executive officer Matthew Chasen flew the Hexa vehicle, which looks a bit like an oversized drone, up and down the parade ground at Camp Mabry in central Texas.

“Agility Prime is a program with a vision of world impact,” Barrett said, according to an Air Force release. “The thought of an electric vertical take-off and landing vehicle - a flying car - might seem straight out of a Hollywood movie, but by partnering today with stakeholders across industries and agencies, we can set up the United States for this aerospace phenomenon.”

The aircraft is called a Hexa, a multirotor craft developed by LIFT Aircraft in conjunction with the US Air Force via the Agility Prime program. According to LIFT’s website, the Hexa weighs just 432 pounds, thanks to its carbon fiber frame, making it “compliant with the [Federal Aviation Administration's] Powered Ultralight classification so no pilot's license is required to fly.”

However, Agility Prime calls the eVTOL craft it’s producing, such as the Hexa, “orbs,” and says they defy comparison to existing vehicles.

“These vehicles are not drones, helicopters, airplanes, cars, trucks, motorcycles, SUVs, and some would adamantly say they are not flying cars,” the Agility Prime website reads. “However, they might support similar missions. Orbs could enable distributed logistics and sustainment, with particular utility in medical evacuation, firefighting, civil and military disaster relief, search and rescue, and humanitarian relief operations.”

Col. Nathan Diller, who heads the Agility Prime program as well as the Air Force’s AFWERX innovation program, said in the release the service has more than 15 of the world’s leading aircraft makers bidding to work with Agility Prime.

Meanwhile, in New Hampshire, lawmakers have already begun preparing for the inevitable introduction of flying cars to the civilian roadways and, um, skyways.

According to the Manchester Link, New Hampshire Governor Christopher Sununu signed into law on July 24 the nation’s first legal framework for registering, inspecting, and plating roadable aircraft, aka, flying cars. It notably bans them from taking off or landing on public roadways.