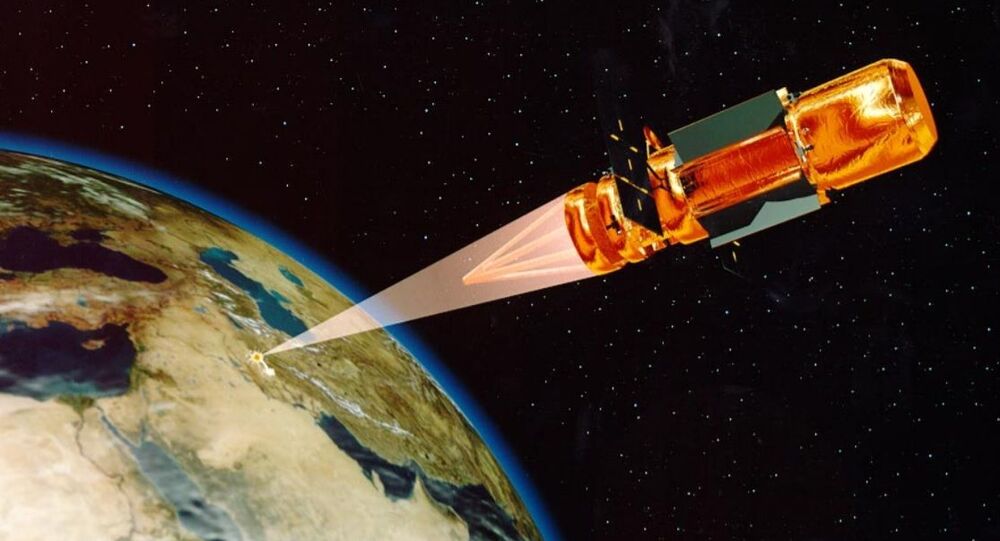 Despite attempts by countries such as Canada, China and Russia to "keep space for peace", the US government has proceeded upon a dangerous path that will lead the heavens to "become a war zone", explains author and journalist Karl Grossman.

The Space Force was brought into existence as the sixth branch of the US armed forces, on 20 December 2019, by the administration of US President Donald Trump.

Karl Grossman, Professor of journalism at the State University of New York/College at Old Westbury, has covered the push to weaponize space for 35 years. Professor Grossman warns that if the US continues on its current path, outer space will turn "into a war zone" which would inevitably lead to the nuclearization of space. He has authored two books on the subject, Weapons in Space and The Wrong Stuff: The Space Program’s Nuclear Threat to Our Planet, and wrote and presented the award-winning TV documentary Nukes in Space: The Nuclearization and Weaponization of the Heavens.

Sputnik: What is meant by the militarisation of space?

Professor Karl Grossman: Wikipedia states: “The militarisation of space involves the placement and development of weaponry and military technology in outer space.”

However, in discussions on the issue, usually there is a separation made between the militarisation of space – the placement of reconnaissance satellites in space to use space to help facilitate war down below on Earth, as examples – and the weaponization of space: the placement of weaponry in space and armed conflict in space.

Sputnik: In 2018 Space.com published an article arguing that “space has always been militarised, just not weaponized”. Do you agree, and if so, what’s the difference between the two?

Professor Karl Grossman: Space has for decades been militarised, but if one sees a separation between space militarisation and the weaponization of space, it has not been weaponized – yet.

Sputnik:  A June 2020 US Space Strategy Review from the Department of Defense asserts “Space is now a distinct warfighting domain, demanding enterprise-wide-changes to policies, strategies, operations, investments, capabilities, and expertise for a new strategic environment.” What’s your response to those claims and those aims?

Professor Karl Grossman: I cite the Outer Space Treaty of 1967, put together by the United States, the United Kingdom and the Soviet Union – and since signed on to by most nations of the world – which declares that space is a global commons to be used for peaceful purposes.

As Craig Eisendrath, who as a young U.S. State Department official was deeply involved in the construction of the Outer Space Treaty, says, “we sought to de-weaponize space before it got weaponized ... to keep war out of space.”

Importantly, the Outer Space Treaty prohibits the placement of weapons of mass destruction in space, but for decades now China, Russia – and U.S. neighbour Canada – have sought to broaden the treaty to prohibit all weapons in space. They have pushed for passage of the PAROS – for Prevention of an Arms Race in Outer Space – Treaty to do this.

However, the United States through the years has essentially vetoed enactment of the PAROS Treaty at the United Nations, voting no. I’ve been there and watched this. It is shameful – and flies in the face of the vision of the Outer Space Treaty of 1967.

The United States, now under Trump, with establishment of a U.S. Space Force, is actively moving to turn space into a war zone.

In December 2019, in signing into being a U.S. Space Force, Trump declared that “it is not enough to merely have an American presence in space, we must have American dominance in space.” He further said the Space Force would enable the U.S. to “control the “ultimate high ground” in space. And he asserted: “Space is the world’s new war-fighting domain.”

Then, in May 2020, while a Space Force flag was unveiled at the White House, Trump declared: “Space is going to be…the future, both in terms of defence and offence.”

Released by the new U.S. Space Force in June amplifying on this was a document titled: Spacepower, Doctrine for Space Forces. It includes such passages as, under “Military Space Power”:

“The value of high ground is one of the oldest and most enduring tenets of warfare…The space domain encompasses all of these attributes, making military spacepower a critical manifestation of the high ground in modern warfare,” and “Military space forces must operate in this new warfighting domain to contribute to winning our Nation’s wars.”

China and Russia – and U.S. neighbour Canada (which certainly cannot be considered in any way a U.S. adversary) --  have led the effort for years to keep space a global commons for peaceful purposes, to keep space for peace. I’ve been to China, I’ve been to Russia and been told that neither nation wants space to become a place of war.

However, if the United States proceeds with its current plans, I anticipate that China and Russia, and then other nations, will respond in kind. And, tragically, the heavens will become a war zone.

Sputnik: How does this compare to the actions other countries are taking in this regard? For example, the Department of Defense claims that China and Russia have already weaponized space implying that it is the US which needs to catch up.

Professor Karl Grossman: The decades of effort by China and Russia for the PAROS Treaty – to strengthen the Outer Space Treaty to keep space for peace does not correspond with the claim that they “have already weaponized space.”

Sputnik: What are the dangers associated with the militarisation of space and why should this be of any concern to the average person?

Professor Karl Grossman: There are many dangers. Among the biggest would be the nuclearization that would inevitably come with the weaponization of space.

Nuclear power as an energy source for space weaponry has been advocated in U.S. military documents and plans for decades.

The plan for Ronald Reagan’s “Strategic Defense Initiative,” which became known as “Star Wars,” was predicated on orbiting battle platforms with nuclear reactors and plutonium systems on board providing the power for hypervelocity guns, particle beams and laser weapons, all of which require large amounts of energy.

As General James Abrahamson, director of the U.S. Strategic Defense Initiative, said: “Without reactors in orbit [there is] going to be a long, long light [extension] cord that goes down to the surface of the Earth” to power space weapons. “Failure to develop nuclear power in space,” said Abrahamson, “could cripple efforts to deploy anti-missile sensors and weapons in orbit.”

The U.S. Space Force scheme is very much an encore of “Star Wars,” and the energy needed to power weapons likely to be deployed in space would be nuclear.

So above our heads would be nuclear-powered battle platforms -- little Chernobyls, little Fukushimas, little Three Mile Islands -- and consider the consequences of a shooting war in space with radioactive material among the other debris that would come raining down.

Sputnik: Is there a pushback against the militarisation of space, and if so, what does it look like?

Professor Karl Grossman: The leading group challenging this madness is the Global Network Against Weapons & Nuclear Power in Space.

It is an important grassroots network. It holds annual international meetings, conducts protests, and is the prime sponsor of a yearly “Space For Peace Week” with gatherings and demonstrations all over the world.

Also, the organisation Beyond Nuclear is deeply involved in the issue and has just published a pamphlet on The U.S. Space Force and the dangers of nuclear power and nuclear war in space. Copies can be downloaded online at BeyondNuclearInternational.org.