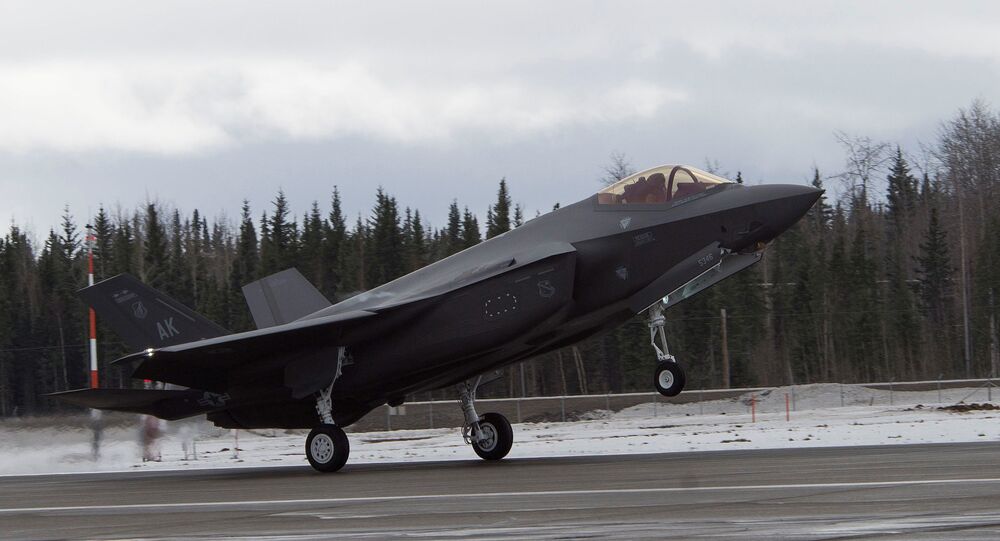 The US Air Force’s F-35 Lightning II stealth aircraft have a rather dangerous aversion to thunderbolts, resulting in the amusing situation of having to protect them during storms. The irony reached new heights as a photo emerged from the recent “Northern Lightning” exercises showing the jets parked near a lightning rod.

An amusing photo has turned up from the US Air Force’s Northern Lightning air combat exercises currently underway in Wisconsin. In a photo taken at the hosting Volk Field Combat Readiness Training Center on August 11, five of the stealthy jets are seen parked under a clear, starry sky, watched over by machines of thunderbolt-deflecting grace.

It’s more than just a silly serendipity, though: the F-35A Lightning II, better known as the Joint Strike Fighter, has a number of unique features that require extra protection in case a thunderstorm rolls across the air base. On the one hand, the jet’s huge computer, the Autonomic Logistics Information System (ALIS), is imperiled by such a strong power surge as a direct lightning hit, but perhaps even more serious is its Onboard Inert Gas Generation System (OBIGGS), which keeps nitrogen-enriched air in the plane’s fuel tanks so that they don’t explode if lightning hits the aircraft.

A June memo noted the OBIGGS system, once believed to be fixed, is continuing to turn up manufacturing flaws that reduce F-35 manufacturer Lockheed Martin’s confidence that the plane can weather a direct lightning hit without blowing up.

“The F-35B as a composite type aircraft does not provide inherent passive lightning protection,” the US Marine Corps (USMC) said in 2018, when Marine Corps Times reported the service was buying 14 LBA Technology lightning rods to protect F-35Bs at Marine Corps Air Station Iwakuni in Japan.

"To be clear, lightning protection is widely considered a best practice for all flight line operations and is an essential safeguard for all aircraft, not just the F-35,” USMC spokesperson Capt. Christopher Harrison told the publication. “Procuring portable lightning rods simply provides a reliable, cost-effective precautionary measure to protect the aircraft when they are located elsewhere on the flight line.”

As a result, the F-35 is recommended to avoid flying within 25 miles of lightning or thunderstorms by the Pentagon’s F-35 Joint Program Office.