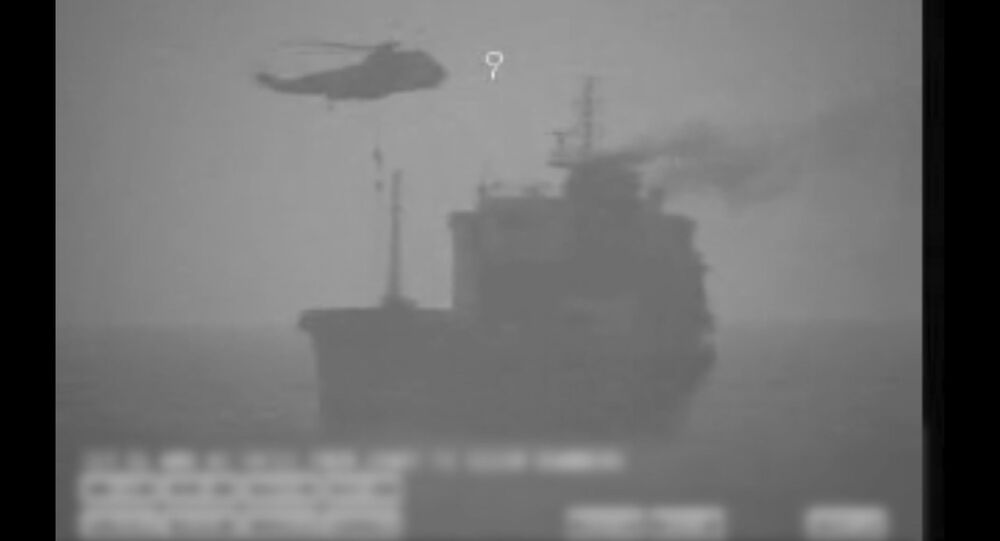 Video provided by the United States Central Command does not clearly show what is happening, only revealing a filtered image of an unidentifiable helicopter approaching a ship.

US Central Command (CENTCOM) tweeted that Iranian forces "overtook and boarded the ship called Wila", adding that two ships and an Iranian "Sea King" helicopter participated in the alleged boarding.

"Today in international waters, Iranian forces, including two ships and an Iranian "Sea King" helicopter, overtook and boarded a ship called the 'Wila.'", CENTCOM claimed in a tweet.

Video attached to the tweet shows a filtered image of an unidentifiable helicopter boarding an unidentified ship.

​The only ship registered under the name 'Wila' is an oil tanker sailing under the Liberian flag, and is currently located at AG - Oman Gulf at position 25° 26' 15.756" N, 56° 29' 42.36" E, not far from Khor Fakkan Anch port, positioning received by Marine Traffic data at 21:02 UTC. According to the website, the Khor Fakkan Anch port was the initial destination of the ship.

The ship tracking service also cites the status of the Wila as "Not Under Command", a status that a ship may have as soon as it is moored or docked, or if is drifting or unable to maneuver due to exceptional circumstance.

According to Howard Altman, a Military Times managing editor, citing a Defence Department source, it is unclear why the ship was boarded.

Altman cited the unnamed source as saying "Iranian forces, most likely SOF, boarded the Wila for several hours before letting it on its way".

A DOD official tells me that Iranian forces, most likely SOF, boarded the Wila for several hours before letting it on its way. No distress signal. US not taking any action. Video shot from US warship about 5 miles away.
Ship is Liberian-flagged according to maritime registry.

According to Reuters, citing an unnamed US official, the US military was not involved in the incident and the ship was eventually released by Iranian forces.

At the time of publication, no comments from Iran have been made and CENTCOM has not provided further details.