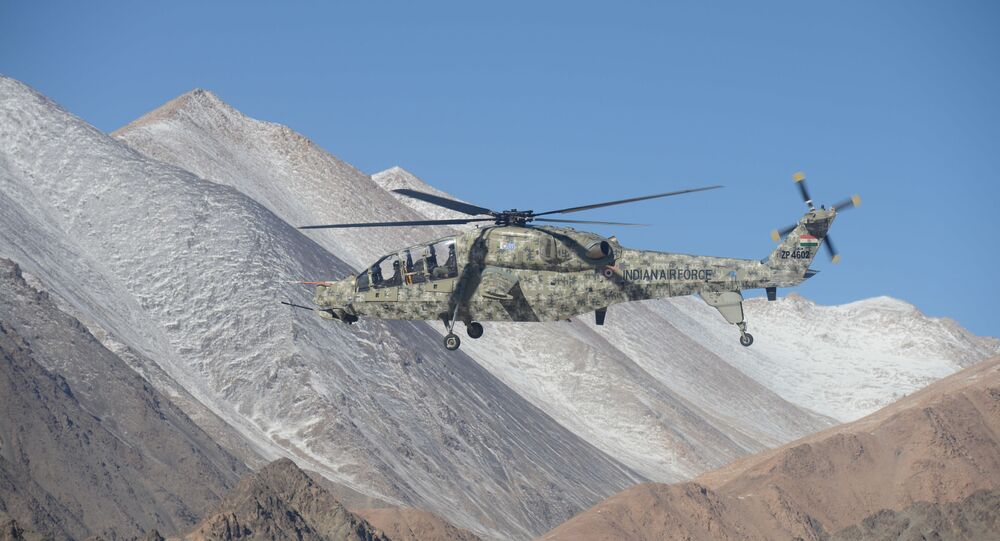 New Delhi (Sputnik): India has deployed fighter jets, transport aircraft, and thousands of additional troops to the Ladakh region to counter movement by the People's Liberation Army. The two Asian giants have failed to reach a consensus on disengagement in Pangong Tso and Depsang Valley after six rounds of military-level talks.

"In light of the prevailing situation on the border, two Light Combat Helicopters (LCH) have been deployed for operations at high altitude (Leh sector) at short notice to support IAF missions", the developer Hindustan Aeronautics Limited said on Wednesday.

The 5.5-tonne class LCH is capable of carrying four French-made Mistral air-to-air missiles on each wing that can intercept a target at a range of up to 6.5 kilometres.

HAL mentioned that the helicopter is operating in a high altitude location in a forward area, demonstrating its quick deployment prowess in extreme temperatures.

Terming it "the lightest attack helicopter in the world", HAL chief R Madhavan underscored that it meets the specific and unique requirements of the Indian Armed Forces. The twin-engine LCH is not only lighter than the American AH-64E Apache attack helicopter but also comes at half the price, i.e. less than $35 million per unit.

The Indian Air Force has already deployed its Chinook and Apache attack helicopters to the region.

The sixth round of commander-level talks between India and China on 9 August failed to make progress over sticking points such as the withdrawal of Chinese troops from the Depsang Valley and Pangong Tso region along the Line of Actual Control (LAC), government sources in New Delhi told Sputnik.

© REUTERS / Danish Ismail
Failure to Disengage, Military Build-Up Indicate No Quick Fix to Border Dispute Between India, China
The sources added that in the coming days joint secretary-level talks could be held to diffuse the situation, which has been tense since April 2020 when the two sides accused each other of transgressing the perceived border in the Ladakh region. In a violent clash on 15 June, 20 Indian soldiers were killed in the Galwan Valley.

Despite foreign minister-level talks and six rounds of military-level consultations, the two countries continue to build up their military strength in case of a possible limited war-like situation in the Ladakh region.