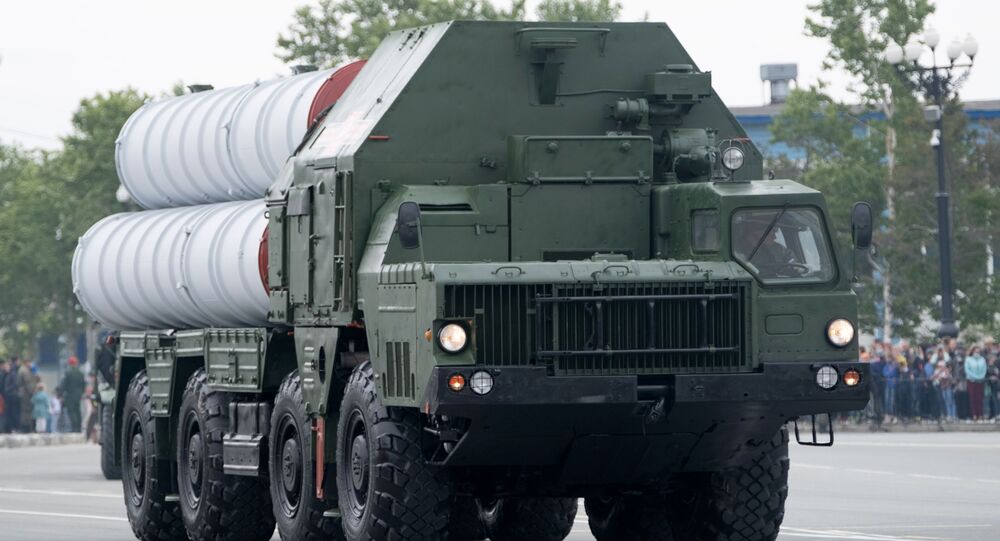 MOSCOW (Sputnik) - The deployment of S-400 missile systems on Russia's Arctic islands is a logical step, needed exclusively for national defence, and it should not raise concerns, Foreign Ministry's Ambassador-at-Large Nikolai Korchunov stated in an interview.

"As for the emergence of the S-400 systems on Russia's Arctic islands, this is a consistent move after the creation of a seamless radar field above the territory of our country. The S-400 system is intended solely for defence. Its deployment anywhere should not raise concerns — if those who express concerns do not develop aggressive intentions against an area or an object that the S-400 is meant to protect", Korchunov said.

US Naval Forces Europe/Africa Commander Adm. James Foggo has recently made a point of Russia's increasing activity in the Arctic, including the opening of new military bases and the deployment of the S-400 surface-to-air systems there.

Russia's Ivan Papanin is not a classic icebreaker but a military ship, therefore the mounting of weapons on it should not trigger any questions, Korchunov stressed. This came as a comment to another statement by Adm. James Foggo, who noted that Ivan Papanin was designed to carry Kalibr cruise missiles and qualified this as a sign of "aggressive approach in the Arctic."

"The fact that weapons are mounted on a military ship should hardly generate questions, especially given that the weapons do not contradict international agreements that our country participates in, like in the case with the sea-based Kalibr missiles", Korchunov said. "The possibility to install containers with Kalibr or Uran cruise missiles on our icebreakers — which is, by the way, mentioned in Russian media as well — is envisioned only during a special period. For this period, it is planned that the vessels can be involved to strengthen the Northern Fleet's seaborne command, whose area of responsibility covers the entire Northern Sea Route and Russia's Arctic coast".

Ivan Papanin, the first Project 23550 multipurpose Arctic-class patrol vessel, was floated in October 2019 and is set to be commissioned on November 25, 2023.

The ship, designed by the Almaz Central Marine Design Bureau, is capable of performing functions of a tug, a patrol vessel and an icebreaker. It is one of the latest developments in the interests of equipping the surface division of the Russian Navy. Ivan Papanin is designated to protect and monitor water resources, to escort and tow detained vessels, to support supply vessels, to take part in rescue operations and to transport special cargo.

Ivan Papanin, expected to be 328 feet long and 65 feet wide, will be able to break 5-feet-thick ice. Its full speed will reach around 18 knots. The vessel will be equipped with a portable anti-aircraft missile system, a  shipborne helicopter, a radar station and a hydrometeorological station.

NATO Building Up Potential in Arctic

Korchunov went on to say that NATO countries use claims of Russia militarising the Arctic to continue ramping up own potential there.

"Despite the fact that at the ministerial meeting in Rovaniemi [in Finland in May 2019], a joint statement was adopted, in which all member countries of the Arctic Council reaffirmed commitment to maintain peace, stability and constructive cooperation in the Arctic, NATO nations, hiding behind the claims of the region’s 'militarisation' against our country, have continued to build up military potential there, including through harnessing the potential of non-Arctic states, and expand military exercises north of the Arctic Circle under the scenario in which Russia is seen as the main threat", Nikolay Korchunov said.

The West has repeatedly expressed concerns over Russia increasing military presence and activities in the Arctic. Moscow has consistently dismissed the "militarisation" allegations, noting that it considers the Arctic to be an area for constructive dialogue and equal, conflict-free cooperation in the interests of all nations.

The ambassador-at-large has rejected claims that Russia has been building up presence in the Arctic to challenge the United States, saying its operations do not go beyond territorial defence.

"The overhaul of the Russian armed forces and efforts to increase operational preparedness in the Arctic are not excessive and are defensive in nature. They correspond to the military and political situation", he underlined.

US Deputy Assistant Secretary Michael Murphy said in May that Russia was trying to project power into the North Atlantic by establishing a new Arctic command, creating Arctic brigades, building new ports and air fields, and preparing to deploy an S-400 air defense system to the Kola Peninsula.

Korchunov argued that Russia's Arctic presence did not pose a national security threat to Arctic states and was not in breach of any international agreements. He added that Russia had never deployed its military to other Arctic states, hosted foreign troops in the Arctic or conducted drills close to "non-Arctic states."

US Secretary of State Mike Pompeo said last week that the United States was "a little late" to react to Russia's interests in the Arctic, but insisted it could still succeed in entrenching there. Korchunov believes that Russia would continue advocating for pragmatism in ties among Arctic neighbors despite "anti-Russian propaganda."

"We have been closely monitoring the nature and undercurrents of Washington's statements on the Arctic. Donald Trump's administration has, on the whole, argued in favor of a special US role in northern matters and pushed through its agenda. Simultaneously, it has been trying to contain its 'opponents' in the region and relying on allies for a stronger claim to northern resources", he explained.

Russia too has a claim to an extended continental shelf in the Arctic, which is estimated to contain about 5 billion tonnes of fuel equivalent. It filed a revised submission to the UN Commission on the Limits of the Continental Shelf in 2015. Korchunov said it was being reviewed by a subcommittee. An answer is expected by 2022.