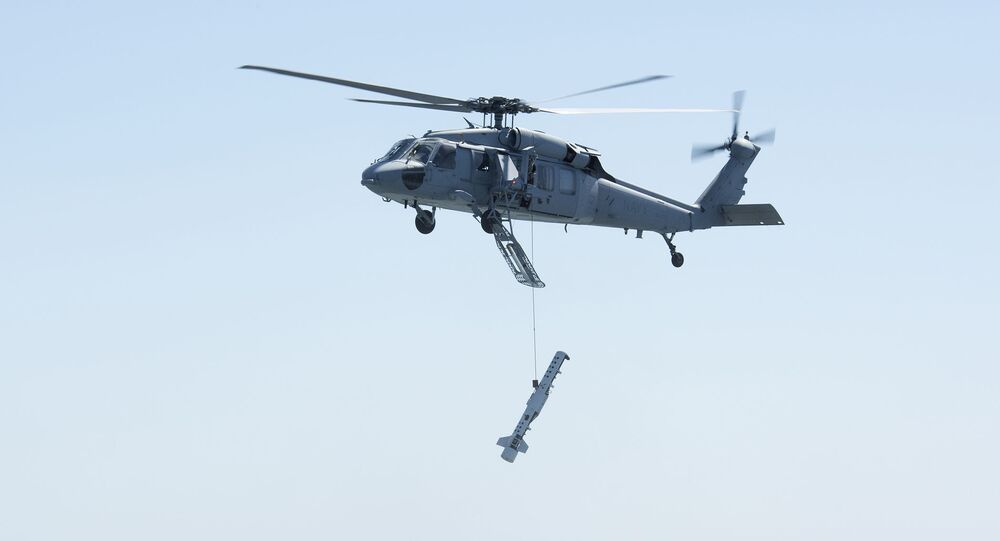 US Navy Recovers Mine Neutralization Pod Accidentally Dropped by Helicopter

A high-tech anti-mine pod accidentally dropped by a US Navy helicopter has been successfully recovered without injury.

Earlier this month, a US Navy MH-60S “Knighthawk” had an "unintentional jettison” of the AN/AQS-235 Airborne Mine Neutralization System (AMNS) pod while flying near the mouth of the Chesapeake Bay off the coast of Virginia, Cmdr. Jennifer Cragg, a spokesperson for Naval Air Force Atlantic, told Military.com on Friday.

Cragg said the pod was recovered on July 14, five days after it was dropped. "The Navy takes incidents such as this very seriously and will conduct a thorough investigation to determine the cause," she added, noting that any punishment that might need meting out will be determined after the investigation.

The AMNS is a robotic system typically stowed in a holster on the side of the helicopter. The Navy adopted it in 2016 because it allows demining operations to take place far from humans. Once dropped in the water, the pod uses sonar to locate naval mines, and a remote operator then dispatches small “neutralizer” vehicles that close in on the mine before detonating it with an explosive shell fired into it, according to defense firm Raytheon, which builds the devices.

Cragg noted there were no other boats in the area that could have been threatened by the errant drop - a big deal, since the 10-mile-wide waterway carries an enormous amount of sea traffic, including cargo ships bound for Baltimore, Maryland, and US Navy vessels operating out of Virginia’s Naval Station Norfolk, the home port of Fleet Forces Command.

Military.com noted the Naval Safety Center classified the incident as a Class-A mishap, meaning the total loss in damage or destruction was more than $2.5 million.

Because the device is still fairly new, the Navy still hasn’t had many chances to use it. The AMNS featured in a demining exercise that formed part of BALTOPS 2019, the annual NATO war drills conducted in the Baltic Sea that are clearly aimed at rehearsing a future war with Russia.

Objects falling from US military aircraft have caused more than a few problems in recent months. A book-sized exterior panel from a US Air Force B-52 Stratofortress plummeted onto a lawn outside New Orleans, Louisiana, in May during the flyovers intended to honor medical staff on the front lines of the COVID-19 pandemic. In September 2019, a US cargo helicopter lost control of a 1,700-pound metal container, which then fell onto the South Korean city of Yongin - again without injuries to those on the ground.

The month prior, a US Marine Corps CH-53E Super Stallion helicopter lost a cabin window just off the coast of Okinawa; although it plummeted into the sea, it still aroused anger on the Japanese island, as objects falling from helicopters are surprisingly common there.