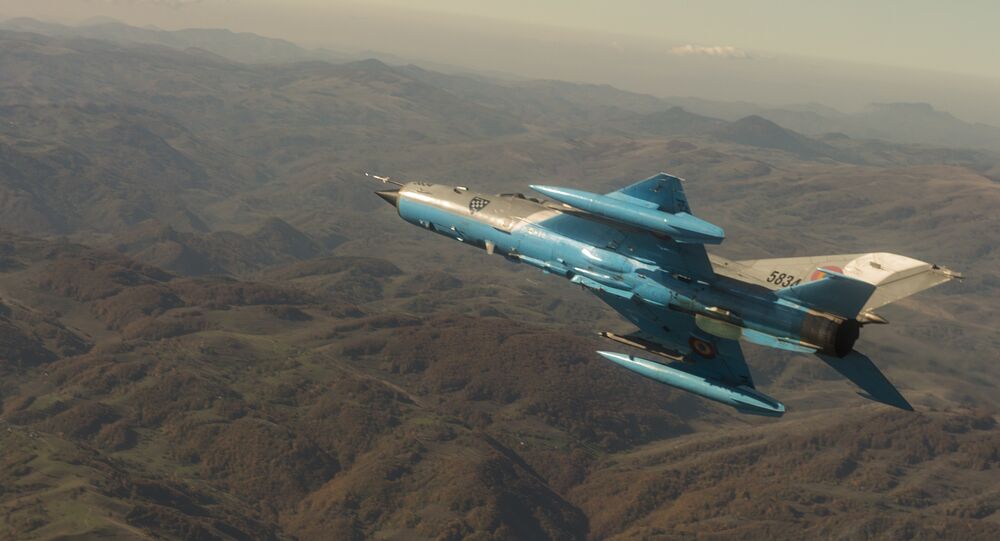 The strategic body of water and its surrounding area have seen a flurry of military activity in recent days, with NATO and partner nations kicking off Sea Breeze drills in the northwestern Black Sea on Monday, and Russia's southern and western military districts conducting large-scale drills as part of a surprise combat readiness check near Crimea.

Romanian MiG-21 fighter jets have been scrambled to escort a pair of Russian Tupolev Tu-22M3 bombers during a scheduled flight over the Black Sea, Russia's Ministry of Defence announced on Thursday.

"During the flight, aircraft crews covered about 4,500 km and were in the air for more than five hours. At certain stages of the route, the long-range aircraft were accompanied by MiG-21 aircraft from the Romanian Air Force," the MoD said in a statement.

The military added that "all flights of Russian Aerospace Forces aircraft are carried out in strict accordance with international rules on the use of airspace," and that long-range flights regularly take place over neutral waters stretching from the Black and Baltic Seas to the Arctic, Atlantic and Pacific Oceans.

Earlier, the MoD indicated that its forces in the Black Sea were monitoring the NATO and partner ships and aircraft taking part in the ongoing Sea Breeze 2020 exercises, which kicked off on 20 July. About 2,000 personnel, 27 warships and 19 aircraft from nine countries, including the US, Bulgaria, Romania, Norway, France, Spain and Turkey, as well as NATO's partners Ukraine and Georgia, are involved in the drills. The exercises are expected to wrap up next week.

In a related development, Russia's Black Sea Fleet recently carried out massive military drills involving over 149,000 personnel during a surprise combat readiness check, with the MoD releasing video footage of the exercises, which involved ground forces, warships and combat aircraft.

The Tu-22M3 is a supersonic, variable-sweep wing long-range strategic and maritime strike bomber developed by the Tupolev Design Bureau in the 1960s, and upgraded repeatedly over the years with new avionics and the ability to carry advanced weapons. The bombers are capable of deploying sea mines, traditional freefall bombs, long-range cruise missiles, and, prospectively, the new Kinzhal nuclear-capable hypersonic missile system.

The Mikoyan-Gurevich MiG-21 fighter jet is an older but tried and tested supersonic jet fighter and interceptor first introduced into the Soviet Air Force in the late 1950s, and since exported to other Warsaw Pact member states (including Romania) and dozens of other countries around the world. Romania continues to operate about 50 upgraded MiG-21s today, although Bucharest has recently begun replacing them with refurbished F-16 Fighting Falcons. Along with Romania, MiG-21s continue to be operated by 19 other nations, including India, North Korea, Serbia, Croatia, Azerbaijan, Syria and a host of African countries.