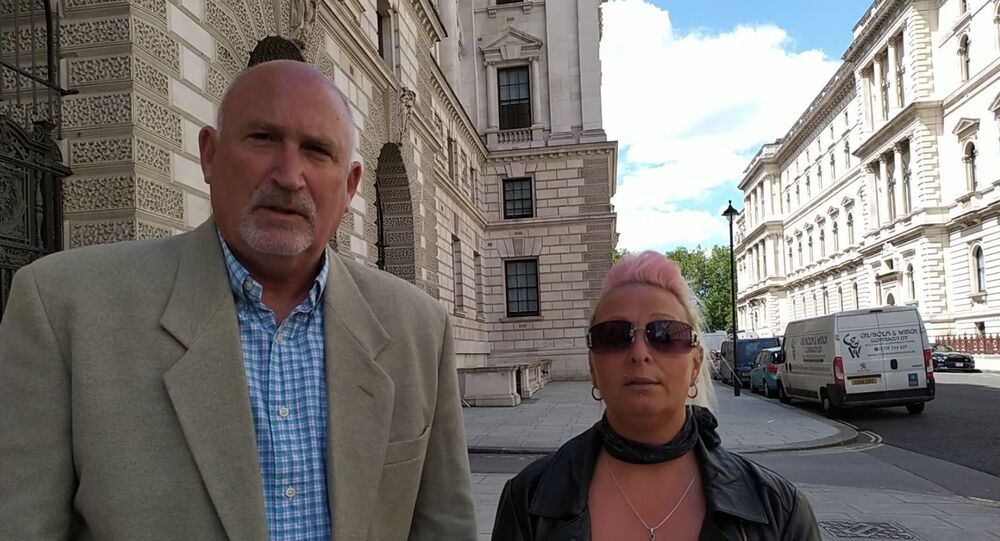 Protesters demanding justice for Harry Dunn and Julian Assange demonstrated outside Number 10 Downing Street and the Foreign and Commonwealth Office on Tuesday as the US Secretary of State arrived in Westminster for high level cabinet meetings in the British government.

"I'm not going anywhere until justice is done", Charlotte Charles, the mother of Harry Dunn explained on Tuesday, 21 July, outside of the UK Foreign and Commonwealth Office.

Ms Charles and Radd Seiger, the Dunn family's spokesperson and adviser, were in Westminster to make their voices heard amid the visit of US Secretary of State Mike Pompeo.

"I'm just here to let Mr Pompeo, Mr Raab, and Mr Johnson know that I’m not just going to wait home and watch them on the TV, when I know that they are only an hour and a half down the road", she said, adding that the campaign to secure the extradition of the woman who killed her son "is still very much alive".

Mr Seiger called out what he described as the improper shielding of US citizen Anne Sacoolas and foremer CIA operative who is accused of accidentally killing motorcyclist Harry Dunn, 18, on 27 August 2019, in a head-on collision in Northamptonshire.

Her car is believed to have been driving on the wrong side of the road.

"We are here today to make absolutely certain that this appalling abuse of human rights that has been inflicted upon this family is reversed and corrected. It is not acceptable for Secretary Pompeo to come to London and pretend that it is going to be business as usual when the life of a UK citizen was lost", said Mr Seiger.

The campaign for justice for #HarryDunn "is still very much alive" his mother and the family's spokesperson @RaddSeiger explained to me today outside of the Foreign and Commonwealth Office, amid the visit of US Secretary of State #MikePompeo.

​"[Harry's] life was important and Secretary Pompeo and President Trump would like to imagine that it isn’t. Well it is and the minute that we start sweeping people like Harry under the carpet for other reasons is the day this country is effectively dead", Mr Seiger warned.

"Just imagine a situation where we all agree that it’s ok for American citizens to come to the United Kingdom kill our children and just walk away, [this is] never ever going to be accepted", Mr Seiger insisted.

Mrs Sacoolas, whose husband Jonathan Sacoolas works for the CIA, left Britain soon after the crash claiming protection from arrest and prosecution under the rules of diplomatic immunity.

At the time it was not publicly known that Mr Sacoolas was an intelligence officer and questions have since been raised as to whether Mrs Sacoolas was in fact entitled to diplomatic immunity via her husband.

Mr Sacoolas was stationed at the US intelligence base at RAF Croughton, Northamptonshire, near where the fatal collision occurred. It has also since been reported that Mrs Sacoolas is herself an intelligence officer, also working for the CIA.

In December 2019 British prosecutors filed charges against Mrs Sacoolas for allegedly causing the death of Harry Dunn by dangerous driving.