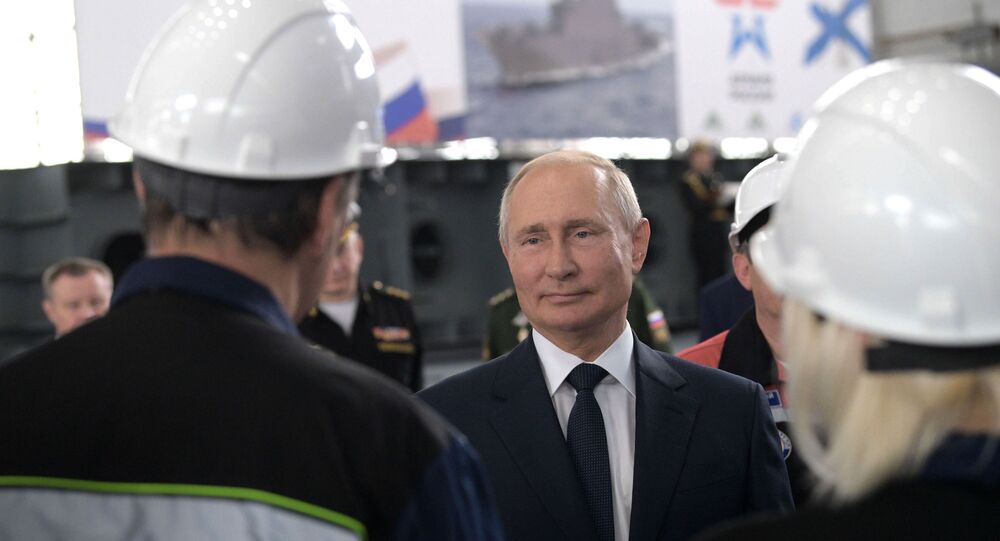 Russia will continue efforts toward establishing a modern combat-effective fleet, President Vladimir Putin said on Monday in an address at a ship-laying ceremony in the coastal Black Sea city of Kerch in eastern Crimea.

"Over the past 8 years, the fleet has included more than 200 ships, boats, and vessels of various classes. It is necessary to continue consistently implementing the measures of the state armament programme so that by 2027 the share of modern ships in the Navy exceeds 70%", the president stressed.

According to the president, the new vessels will be equipped with advanced armament, command and long-haul communications systems.

"They will significantly strengthen the combat potential of the Russian Navy and boost its strategic capacities", Putin said.

He further elaborated that Russia will continue working toward developing a modern combat-effective fleet, "we will keep creating vessels that are equipped with advanced weapons".

Putin also added that around 60 Russian Navy vessels are currently sailing in the world’s oceans.

"There are now about 60 of our ships and support vessels in key areas of the world's oceans. Almost half of them are in deep sea areas", Putin said.

He added that such cruises have been carried out by Russian ships on an ongoing basis of late.

© Sputnik / Alexey Druzhinin
Working trip of the President of the Russian Federation V. Putin to the Republic of Crimea

Russia's largest shipbuilding enterprise Sevmash is now working on two nuclear-powered submarines with hypersonic weapons, according to Mikhail Budnichenko, the Director General of the company.

© Photo : Oleg Kuleshov
10 Russian Subs Reportedly Sent to the Atlantic in 2019 for 'One of Largest Drills Since Cold War'
The statement comes after President of the United Shipbuilding Corporation (USC) Alexei Rahmanov stated in June that the Russian Navy will receive the Borei-A class nuclear-powered ballistic missile submarine Knyaz Oleg, named after Prince Oleg of Novgorod, in December of this year.

During an address to the Federal Assembly in 2018, Russian President Vladimir Putin announced that Poseidon nuclear-powered underwater drones were being developed in Russia.