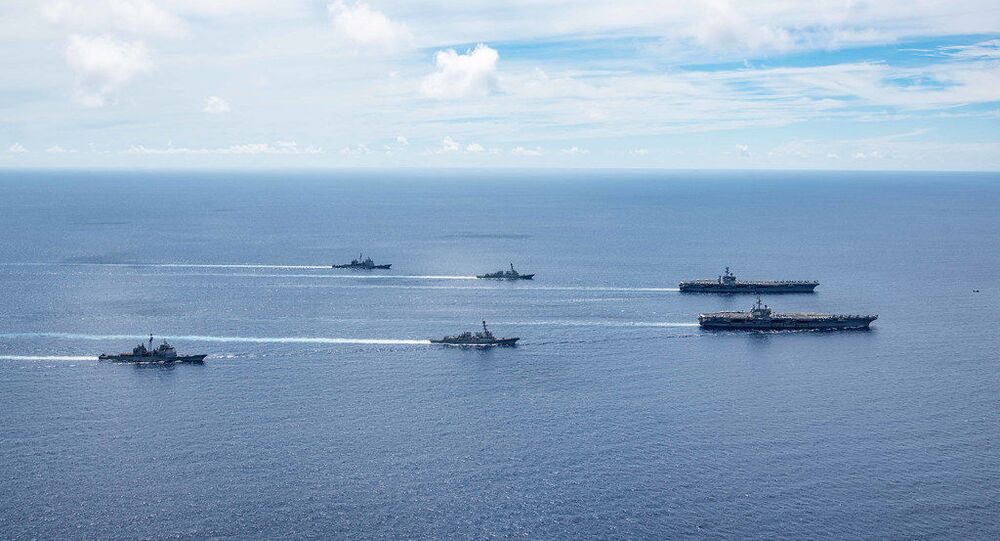 The United States deployed a quarter of its carrier fleet to the Pacific a month ago amid soaring tensions with China over Hong Kong, coronavirus, trade and Beijing’s entrenchment in the South China Sea. Chinese media have warned that the country could deploy “countermeasures” against the US warships, including carrier-killing ballistic missiles.

The USS Ronald Reagan and USS Nimitz aircraft carrier strike groups have begun naval drills in the waters of the South China Sea for the second time in two weeks.

The strike groups, manned by over 12,000 US personnel, and equipped with over 120 aircraft between the two carriers, plus half-a-dozen guided missile cruiser and guided-missile destroyer escorts, are carrying out the drills “to maintain warfighting readiness and proficiency,” according to the US Pacific Fleet.

“The Two-carrier strike force trains to the highest levels of readiness to ensure responsiveness to any contingency through power projection,” the Fleet said in a statement Friday.

The US rarely deploys its carrier strike groups together like this, with this month’s drills being the first of their kind since 2014, and only the third since 2001.

Beijing slammed what it said was Washington’s attempt to “militarise” the South China Sea last week, accusing the US of trying to “drive a wedge between countries” and to “undermine peace and stability” in the region. In mid-June, as the US moved to position its carriers in place, China’s Global Times newspaper warned that the People’s Liberation Army would undoubtedly deploy “countermeasures,”  and pointed to the existence of several classes of Chinese ‘carrier-killing’ missiles capable of piercing the carrier groups’ multilayered air defence systems.

On Monday, US Secretary of State Mike Pompeo announced that the US formally rejects “most” of China’s territorial claims in the South China Sea, accusing Beijing of bullying its neighbours and stressing that “the world will not allow Beijing to treat the South China Sea as its maritime empire”. The Chinese Embassy in the US dismissed Pompeo’s claims as “completely unjustified” and accused the US of trying to “sow discord between China and other littoral countries”.

The territorial dispute in the South China Sea dates back to the post-WWII period, with China laying claim the vast majority of the strategic sea zone and Vietnam, Malaysia, Brunei, the Philippines and Taiwan making their own claims. In 2002, China and the ASEAN group of nations agreed to the need for a code of conduct in the South China Sea, with talks on the matter continuing for nearly two decades now. In 2010, US Secretary of State Hillary Clinton designated the South China Sea a matter of US national interest. The US has no territorial claims to the sea, but has used its Navy repeatedly to challenge Beijing’s claims by carrying out ‘freedom of navigation’ missions in the region.