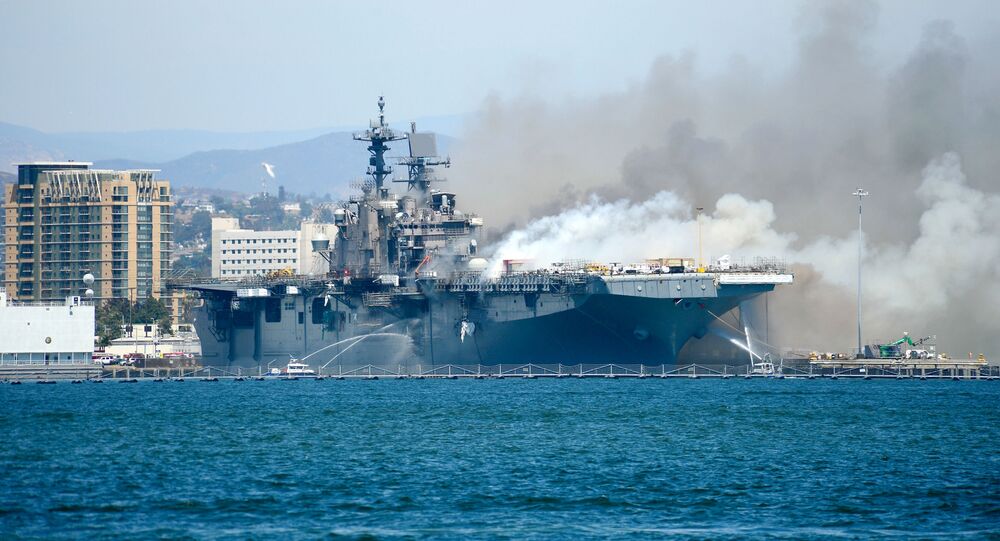 The USS Bonhomme Richard, which is docked at Naval Base San Diego, caught fire on Sunday; the battle to eliminate the blaze has continued aboard the warship for almost 40 hours now. The cause of the conflagration remains unknown.

The fire suppression system aboard the USS Bonhomme Richard was off at the time when flames tore through the ship, Rear Adm. Philip Sobeck told The Hill on Monday.

The system, which uses the liquefied, compressed gas Halon to stop the spread of fire, “was not on operation just because it was being worked on”, Sobeck said.

The USS Bonhomme Richard, an amphibious assault ship, was undergoing regularly scheduled maintenance at Naval Base San Diego when a fire was reported on board at around 8:30 a.m., local time (15:30 GMT).

While the precise cause remains unknown, Sobeck said it likely started in the lower cargo area of the ship, which typically houses marine equipment and vehicles. The admiral, who commands Expeditionary Strike Group 3, said there was nothing toxic on board.

At least 59 people, including 36 sailors and 23 civilians, have been treated for heat exhaustion and smoke inhalation, while five sailors have been hospitalised with non-life threatening injuries.

Fire fighting crews continued operations on board the USS Bonhomme Richard as of Tuesday morning, with helicopters dropping water onto the burning ship.

“We’re assessing the extent of the damage and that’s going to be ongoing. Once we get the fire out, which is the priority, we’ll then make a complete assessment,” said Sobeck.

The USS Bonhomme Richard was commissioned in 1998 and completed a six-year mission in Japan as part of the US Navy’s Forward Deployed Naval Force in the Western Pacific.