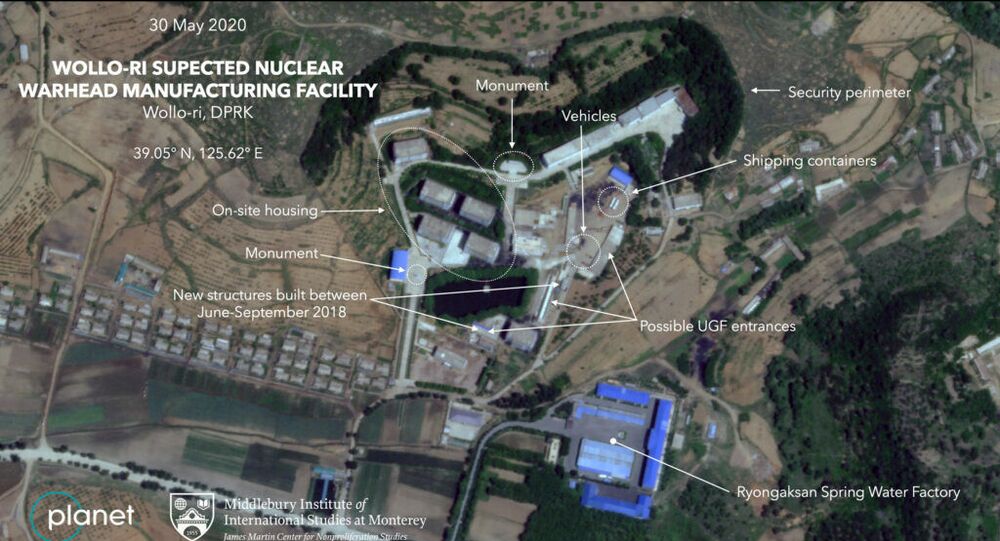 Talks between North Korean leader Kim Jong-un and his US and South Korean counterparts aimed at bringing a formal end to the Korean War and denuclearizing the peninsula have been frozen amid a cooling of relations partially attributed to a South Korean leafleting campaign.

The image, reportedly taken in late May, is said to be situated in the town of Wollo-ri in Pyongyang region, with the ‘nuclear warhead factory’ situated near the Ryongaksan Spring Water Factory.

Jeffrey Lewis, a professor at the Middlebury Institute specializing in arms control, spoke to CNN and released a report on the suspected nuclear site, saying it “has a number of signatures suggesting that it has a role in the DPRK’s nuclear program,” including “a strong security perimeter and what appears to be several high-rise residential buildings on site,” with North Korea “emphasiz[ing] the construction of better housing as a perk for scientists and technicians involved in the nuclear and missile programs.”

“Moreover, although there are monuments at the Wollo-ri site that indicate leadership visits, we find no state media reports on any such visits. These are all characteristics of other DPRK nuclear facilities, such as the enrichment plant at Kangson,” the observer added.

According to Lewis, the suspected secure facility’s amenities, which may include possible underground elements, “stand in stark contrast” to the adjacent spring water factory, which “has little security and no on-site housing.”

US intelligence suspects that the facility is engaged in warhead manufacturing, according to the analyst.

“The building in question is the Pyongyang Anti-Aircraft Unit Command’s Political Military University, which is located on the right-hand side of a road running through Wonro Village heading toward Taedong County from Chilgol Station,” the source was quoted as saying, adding that there were no underground components or high-rise buildings onsite.

The source pointed out that along with the bottling facility situated “directly across from the school’s front gate…there is farmland inside a wall behind the main office building,” and a graveyard where people gather during traditional Korean holidays to pay respects to their ancestors, “which makes it very unlikely that [the government] would conduct secret nuclear program-related activities there.”

The ‘new North Korean nuclear facility’ story comes just days after the Pyongyang announced that the nation has no intention of holding any more talks with the US any time soon.

“Is it possible to hold dialogue or have any dealings with the US which persists in the hostile policy toward the DPRK in disregard of the agreements already made at the past summit?” First Vice Foreign Minister Choe Son-hui asked, speaking to North Korea’s Korean Central News Agency last week.

According to Choe, the Trump administration’s trick of using negotiations with Chairman Kim Jong-un as a “tool for grappling its political crisis” would no longer “work” on Pyongyang.

© REUTERS / KCNA
North Korea, Outraged by 'Dirty' Propaganda Imagery 'Aimed at Kim's Wife', Blew Up Liaison Office
Earlier, Pyongyang moved to sever all inter-Korean communications and blew up the Kaesong joint liaison office amid a dispute involving South Korea’s spreading of propaganda leaflets into North Korean territory. North Korea went on to threaten Seoul with its own leafleting campaign, saying it has 12 million leaflets at the ready to spread into South Korea aboard over 3,000 air balloons.

US Remains Ready to Engage in Dialogue With North Korea, State Department Says