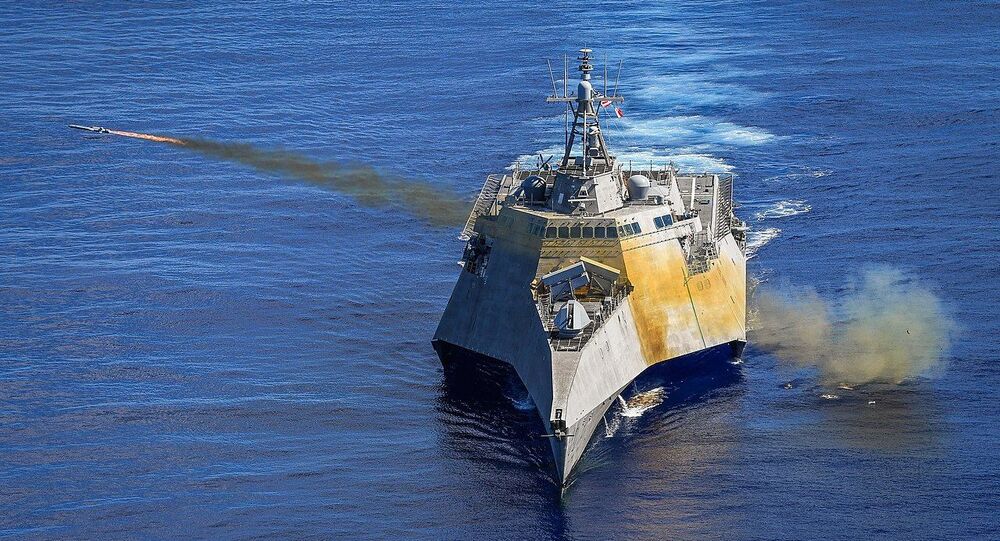 The warship in question presumably needs a full load of offensive and defensive weapons at all times, given that it is regularly sailed into contested waters off the Chinese coast.

Military observers at The Drive have taken issue with the US Navy’s failure to replace an expended Norwegian-made Naval Strike Missile (NSM) onboard the USS Gabrielle Giffords littoral combat ship, over 270 days after launching one off Guam during the SINKEX naval drills on October 1, 2019.

Analyzing official Navy photos of the littoral combat ship following the launch, the outlet observed that “after more than nine months, the forward-deployed Gabrielle Giffords has still not loaded a fresh launch canister in place of the one it expended last year, and has been operating with seven RGM-184As ready to fire, rather than a full load of eight.”

The US Seventh Fleet declined to comment on the missing missile, only confirming that the warship continues to take part in ‘freedom of navigation’ missions in the contested South China Sea.

Observers could not offer an explanation for the delay in replacing the expended missile, but did recall that the Norwegian-made missile had previously been touted “as a critical upgrade” to both of the US’s littoral combat ship subclasses.

Indeed, following the October 2019 test launch, General Dynamics, the US weapons maker charged with integrating the Norwegian defence system into the US Navy, boasted that the launch showed “what a small team of highly talented people can do in a very short time.”

For his part, US Navy commander Rear Admiral Joey Tynch said the launch demonstrated that the Independence-class of littoral combat ships “packs a punch and gives potential adversaries another reason to stay awake at night.”

“As such, having a visibly empty missile canister in place for months on end seems, at best, puzzling and, at worst…raises questions about the state of the program, as well as the Navy’s ability to support deployed examples of the system and its commitment to keeping these ships on the front line fully armed with the few weapons they can carry,” The Drive suggested.

Developed by Norwegian defence concern Kongsberg Defence & Aerospace in the early 2010s, the Naval Strike Missile (NSM) is an advanced anti-ship and land-attack cruise missile in service with Norway, Poland, Germany, Malaysia and the United States. The over-the-horizon missile has an operational range of up to 185 km, and features inertial/GPS/terrain reference navigation, complemented by infrared homing.

The US made the decision to adopt the NSM aboard its Freedom and Independence-class littoral combat warships in May 2018.

The Pentagon has recently expressed concerns about the range of Chinese missile developments, with the YJ-12 anti-ship missile boasting a range of up to 400 km, while the YJ-18 is estimated to have a range of nearly 540 km. Believed by the Pentagon to share similarities with or even be copies of Russian Kalibr missiles, the YJ-18 has been in service with the People’s Liberation Army Navy since 2015.

'We Are Your Nightmare': Iran Has Underground 'Missile Cities' on Southern Coasts, Admiral Says