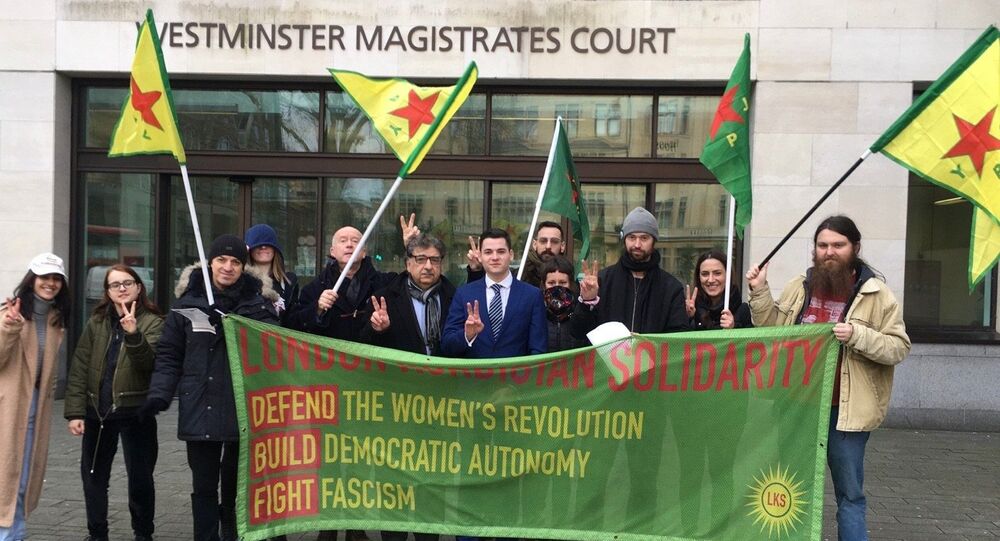 'Absolute Farce': Prosecutions Against Brits Who Fought Alongside YPG Dropped

Several other British people who joined the group have been arrested and questioned by counterterror police, with some having their passports and phones seized, but faced no further action. As of July 2020, eight British volunteers – seven men and one woman – have been killed in action while fighting with the group.

UK prosecutors have dropped terror charges against a British Army veteran who travelled to Syria in 2017 to volunteer with Kurdish People’s Protection Units (YPG) fighters against Daesh*.

Ex-paratrooper Daniel Burke fought with the Kurds for until June 2018, and no action was taken upon his return, but he was subsequently prosecuted after allegedly attempting to return to support the YPG against an invasion by Turkish-led forces in 2019. He served in the Army’s Parachute Regiment 2007-2009.

© Photo : YouTube/SDF Press Center
Daesh Fighters Dressing as Women to Avoid Capture by YPG in Syria – Reports
He was remanded in prison ahead of a trial due to take place in October, amid concerns over the coronavirus pandemic – but charges of preparing acts of terrorism and supporting terrorism were dropped 3rd July.

A barrister told the Old Bailey the Crown Prosecution Service was presenting no evidence against Mr Burke, or two others originally charged in a separate case.

Paul and Sam Newey - the father and brother of another individual who fought with the YPG - were prosecuted for terror offences in the first case of its kind. Paul Newey was accused of funding terrorism by sending £150 to his son, while his 19-year-old son was accused of helping his brother.

I act for Daniel Burke (& Aiden James before him) with brilliant Andrew Hall QC. Thrilled that Dan’s nightmare is at an end & hope he can begin to rebuild his life. However, urgent questions remain about the political use of over-broad terrorism laws. (Brief thread) https://t.co/iEhKvCbqiB

​Daniel Newey, who remains in Syria, joined the YPG while the group was backed by the US-led coalition to expunge Daesh from of its Syrian territories in 2017.

He returned to Britain in 2018 but travelled to Syria again the next year after Turkey launched an offensive against Kurdish-held territory in October.

Simon Davis, for the prosecution, said the case had been “reviewed” after defence lawyers provided an expert report and documents alleging an abuse of process.

“In advance of this hearing, the prosecution notified all parties of their intention to offer no evidence against all the defendants. It’s the responsibility of the prosecution to review matters continuously and as the case has developed, the prosecution has concluded that there is now insufficient evidence to sustain a reasonable prospect of conviction,” he added.

.@SuellaBraverman @pritipatel Why did you lock up an ex paratrooper who fought with the Kurds against ISIS, in a high security prison in the UK with other ISIS terrorists for 7 months & then drop the case? Was this arms sales for criminalisation of the YPG for the Turkish regime? pic.twitter.com/JA0eK1dpyq

​Asked for an explanation by the judge, Davis said he hadn’t been instructed to give further detail but the decision had been “made after careful thought and consideration”.

Presiding judge Justice Sweeney formally entered not-guilty verdicts for every count against all three defendants and that Paul and Sam Newey be paid £100 each for their travel costs to court.

Andrew Hall QC, representing Burke, said he’d been detained since December 2019 and deserved a “detailed explanation” of why the case against him was dropped.

Richard Thomas, representing Paul Newey, said the family had been “vilified in this country, called terrorists and been threatened”, and as a result were “entitled to an explanation”, given the “very serious charges”.

Sweeney called for submissions in writing from the prosecution and defence ahead of another hearing 10th July.

Paul Newey told The Independent his life had been an “absolute nightmare” since he and his son were arrested by counter-terror police in December.

“It’s been a total farce, the police and CPS need to be ashamed for even bringing the case. [My son] is still in Syria. I haven’t been able to speak to him to see if he’s OK and what he’s going through. They are the latest in a string of failed prosecutions against people who supported the YPG. The case is complete joke and a waste of everybody’s time. Nobody supporting the YPG is going to be a danger to the British public, they’re fighting for a cause they believe in to protect people. How are they terrorists?” he fulminated.

“It’s been a total farce, the police and CPS need to be ashamed for even bringing the case,” he added.

"Nothing has changed in the evidence, we haven’t bought anything new forward."

​Former volunteer Aidan James was jailed November 2019 for attending a training camp operated by the banned Kurdistan Workers’ Party (PKK) in Iraq but was acquitted by a jury for the same offence at a YPG camp.

The CPS initially charged him with preparing acts of terrorism by travelling to Syria to join the YPG but a judge found he’d “no case to answer”.

Justice Edis noted the Kurdish group was “supporting the policy of the UK and other allies” by fighting Daesh and was backed by RAF airstrikes, and told the Old Bailey fighting alongside the YPG “was not terrorism at all” under current laws.