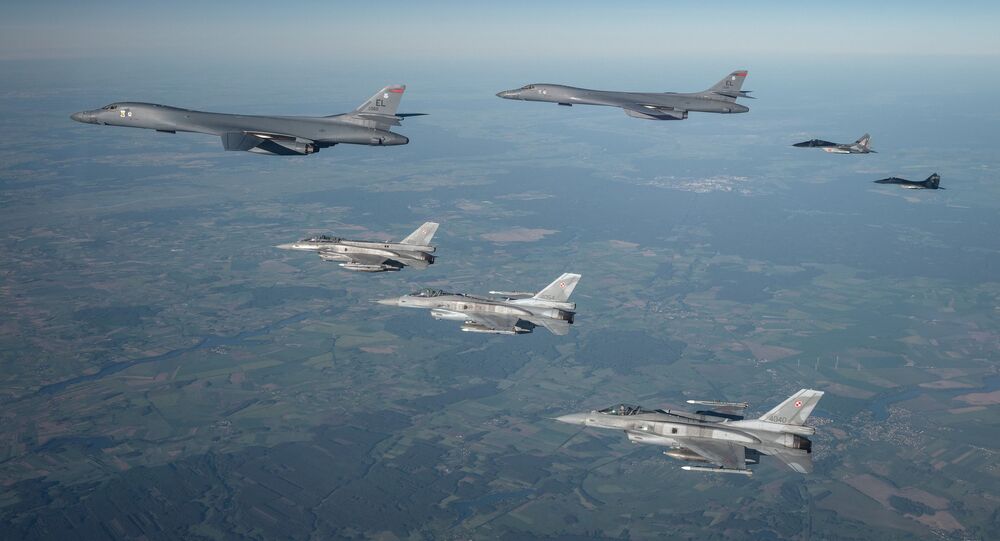 Earlier this month, after the Trump administration announced plans to pare down the number of US troops in Germany from 34,500 to 25,000 over Berlin’s “delinquency” on NATO spending obligations, Moscow warned that Russia-NATO relations could worsen if these forces were moved east to Poland.

The US plans to deploy 2,000 troops to Poland, double the roughly 1,000 previously expected, Polish daily Dziennik Gazeta Prawna has reported, referring to the upcoming defence talks between President Donald Trump and President Andrzeij Duda during Duda’s visit to the US on Wednesday.

Furthermore, according to the newspaper’s sources, the US Air Force will transfer 30 F-16 fighter jets to Poland from Germany, with the Polish military receiving five second-hand US C-130 Hurcules airlifters.

TheAviationist.com says it’s unclear where the F-16s will come from, but hints the jets may come from the Spangdahlem Air Base in Germany, where 28 F-16s are currently based.

Also on the agenda is the signing of a US-Polish Defence Cooperation Act regulating the principles under which US forces will operate with their Polish counterparts, although details are scarce as to what that may entail.

Poland, DGP says, is also looking to buy US combat helicopters – possibly Boeing AH-64 Apaches or Bell AH-1Z Vipers, although the status of that deal is also unclear.

NATO and US forces regularly engage in exercises on Polish territory, and use the country to transit forces further east, to the Baltic States. Additionally, the US has a symbolic detachment of Air Force personnel stationed in Poland. In September 2019, President Trump approved the construction of a permanent military base in the Eastern European country, which Warsaw graciously offered to name ‘Fort Trump’. Earlier this month however, US officials told Reuters that the project has run into problems.

In addition to troops on the ground, the US is building an Aegis Ashore missile defence facility in northern Poland, with the system ostensibly designed to intercept ballistic missiles. Moscow has indicated, however, the facility could easily be converted to station offensive nuclear-capable cruise missiles. The system is currently expected to go online in 2022 after numerous construction delays.

Earlier this month, the Russian foreign ministry warned that already complicated relations between Moscow and NATO would worsen further if the US moved troops from Germany to Poland, in line with recent proposals by Warsaw.

In May, after German lawmakers pressured Washington to pull its tactical nukes out of Germany, the US Ambassador to Poland also suggested that Warsaw “step in and take over” control over the weapons, stationing them on Polish soil. Polish officials indicated that they have no intention to do so. Russian Foreign Minister Sergei Lavrov said such an eventuality would be a direct violation of the Russia-NATO founding act of 1997, which committed the alliance not to place nuclear weapons in the territory of any new members of the military bloc.

NATO has expanded eastwards over the last 20+ years, despite a verbal commitment to Soviet leader Mikhail Gorbachev in 1990 not to do so. Since 1999, the Western alliance has swallowed up every former member of the Moscow-led Warsaw Pact, as well as three republics of the former Soviet Union, and three republics from the former Yugoslavia. In 2014, amid a cooling of Russia-NATO relations in the wake of the Ukraine crisis, the alliance has stepped up military deployments, drills, and reconnaissance flights along Russia’s borders, moves which Moscow has warned may cause a spiraling escalation.