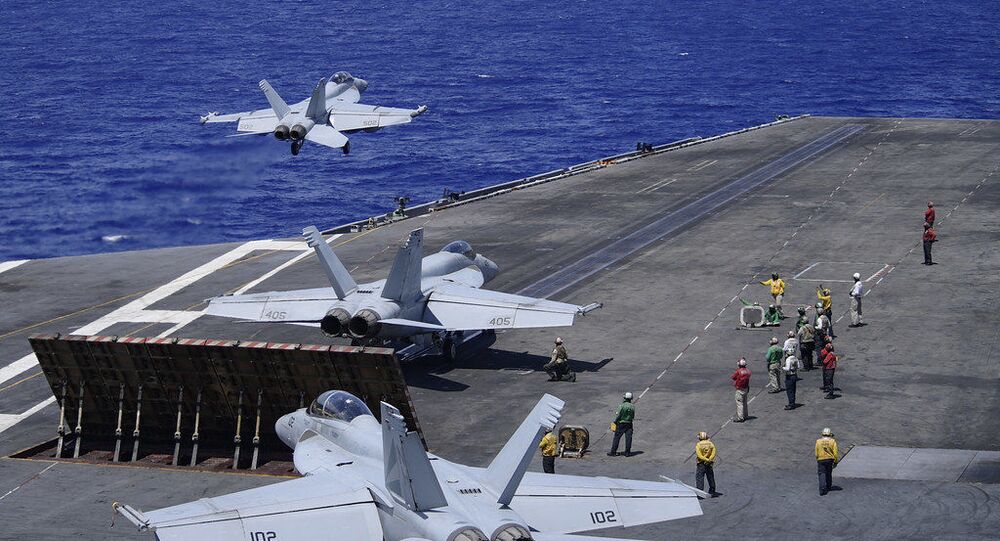 The US deployed three aircraft carrier strike groups, or over one quarter of its active duty carrier fleet, to the Pacific last week amid escalating tensions with Beijing over Taiwan, Hong Kong, coronavirus and China’s entrenchment in the South China Sea.

The USS Roosevelt and USS Nimitz’ led carrier strike groups began joint flight operation drills in the Philippine Sea on Sunday, with the Navy reporting that the exercises are aimed at “demonstrating the United States’ unique capability to operate multiple carrier strike groups in close proximity.”

“This is a great opportunity for us to train together in a complex scenario,” Rear Adm. Dough Verissimo, commander of the Roosevelt-led strike group was quoted as saying. “By working together in this environment, we’re improving our tactical skills and readiness in the face of an increasingly pressurized region and COVID-19.”

In addition to the aerial drills, the strike groups are expected to practice air defence, surveillance, replenishment at sea, long-range offensive strikes, and coordinated naval maneuvers.

Rear Adm. James Kirk, commander of the Nimitz’ led strike group, said the joint operations “demonstrate the resilience and readiness of our naval force and are a powerful message of our commitment to regional security and stability as we protect the critically important rights, freedoms and lawful uses of the sea for the benefit of all nations.”

The Roosevelt and the Nimitz and their support ships joined the USS Ronald Reagan strike group operating off Japan for a Pacific deployment last week, with the heavily armed naval groups deployed to send a message to China about the US’s continued ‘leadership’ in the region.

Verissimo called the joint deployment “a great opportunity  for us to train on how we would operate multiple carrier strike groups in a contested environment.”

“US aircraft carriers possess flexibility, endurance, firepower, maneuverability and capability unmatched in the history of warfare,” he added.

In addition to carriers and their air wings, the drills involve eight other warships, including guided missile cruisers and guided missile destroyers.

Last week, China warned that it would deploy “countermeasures” to the US carrier deployment, with the Global Times newspaper pointing to the People’s Liberation Army’s possession of several classes of ‘carrier-killing’ weapons including the DF-21D and DF-26 anti-ship ballistic missiles. If deployed along China’s coast, the DF-26 is capable of reaching as far as Guam. Both missiles fly toward their targets at extremely high speeds, making them very difficult to intercept, even by US carrier strike groups’ extensive, multilayered air defence systems.

© AFP 2021 / ANDY WONG
Military vehicles carrying DF-26 ballistic missiles drive past Tiananmen Gate during a military parade at Tiananmen Square in Beijing on September 3, 2015, to mark the 70th anniversary of victory over Japan and the end of World War II

The simultaneous deployment of three carriers to the Pacific is the first show of force of its kind in nearly three years, and comes amid another escalation of US-China tensions earlier this month after Taiwan’s defence ministry allowed a US Navy C-40A Clipper cargo aircraft to fly the span of the island on its way from Okinawa to Thailand. China, which classified Taiwan as its rightful territory, called the incident “provocative.” The incident was just the latest amid a long line of grievances between Washington and Beijing including the origins of the coronavirus, a trade dispute worth hundreds of billions of dollars, technological competition, arms control issues, Hong Kong protests, the South China Sea dispute, and more.

On Thursday, President Trump reiterated that the US maintains “a policy option” under which Washington could completely break off ties with Beijing after being challenged on the issue by US trade negotiator Robert Lighthizer, who told Congress Wednesday that a “decoupling” of the two economic powers would be impossible.

It was not Ambassador Lighthizer’s fault (yesterday in Committee) in that perhaps I didn’t make myself clear, but the U.S. certainly does maintain a policy option, under various conditions, of a complete decoupling from China. Thank you!