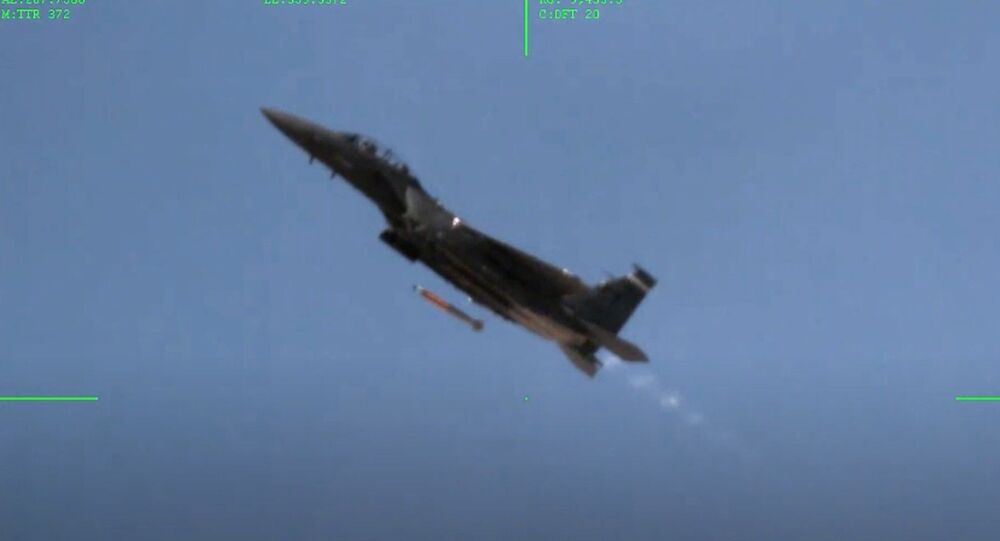 The F-15E Strike Eagle has become the first aircraft to demonstrate compatibility with the B61-12 nuclear gravity bomb, following a series of flight tests that reportedly met Washington’s performance and safety standards.

Sandia National Laboratories announced Monday that the US Air Force’s F-15E Strike Eagle had successfully completed a full-weapon system demonstration in March that exhibited the B61-12’s compatibility with the aircraft.

A mock version of the nuclear gravity bomb was dropped by the aircraft from an altitude of more than 25,000 feet at Sandia’s Tonopah Test Range in Nevada. The fake B61-12 remained in the air for approximately 55 seconds before it landed and embedded itself in a dried-out lakebed, “splashing a 40- to 50-foot puff of desert dust from the designated impact area,” according to the release. Another successful test was performed from an altitude of 1,000 feet.

“We were able to test the B61-12 through all operational phases, and we have extremely high confidence the B61-12 is compatible with the F-15E Strike Eagle,” Steven Samuels, a manager on Sandia’s B61-12 system team, asserted in the lab’s news release.

“This is the real deal, minus the nuclear package. This test brought together years of planning, design, analysis, test and qualification to fully demonstrate the B61-12 on the F-15E Strike Eagle,” Samuels said, adding that the “tests met all requirements, both in performance and safety.”

Sandia is one of three research and development laboratories under the US’ National Nuclear Security Administration (NNSA). The lab handles design and engineering for non-nuclear components of the US’ nuclear stockpile.

The F-15E-B61-12 compatibility tests come as part of the agency’s B61-12 Life Extension Program - which seeks to “refurbish, reuse, or replace all of the bomb’s nuclear and non‐nuclear components to extend the service life of the B61 by at least 20 years.”

The NNSA has stated that the first refurbished nuclear gravity bombs will be manufactured in fiscal year 2022. The B61-12 is estimated to be 12 feet long and has a mass of 825 pounds.

Sputnik reported last month that the F-35’s Block 4 upgrade - which is expected to integrate the nuclear gravity bomb into the stealth fighter’s repertoire - had been delayed some nine months, pushing full-rate production back to sometime between September 2020 and March 2021.

The Government Accountability Office release on the matter detailed that the upgrade, originally expected to cause a baseline cost increase of $8 billion, is now estimated to total around $13.9 billion in development and procurement costs.

Around the same time, NATO Secretary-General Jens Stoltenberg penned an op-ed, arguing that stationing of US nuclear weapons at the Buchel Airbase in western Germany is necessary due to the “proliferation of nuclear weapons to countries like North Korea, as well as the continuing aggressive actions by Russia.”

The US, which is currently spending some $1.5 trillion to modernize its nuclear forces, has 20 B61-12 bombs at the German base. For the sake of comparison, Washington estimates Moscow has spent approximately $28 billion in nuclear modernization efforts. It remains unclear whether the US will renew the New Strategic Arms Reduction Treaty, which expires on February 5, 2021.