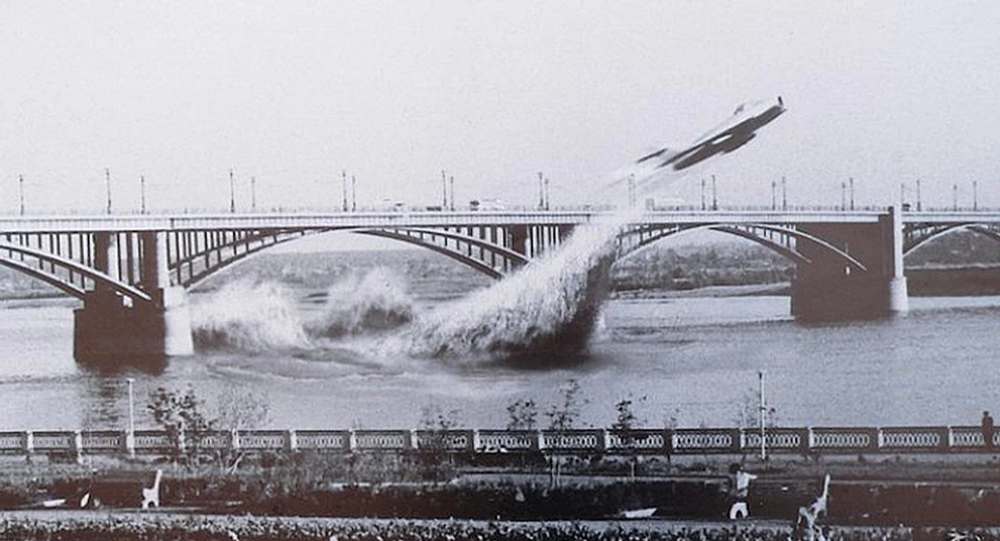 The incident, which involved a MiG-17 fighter jet, Siberia’s Ob River, one of Novosibirsk’s main bridges, and hundreds of onlookers, has entered the record books as an example of both incredible aerial skill and brazen folly.

June 4, 1965 was a hot, lazy Friday summer day in Novosibirsk, Siberia, with hundreds of sunbathers and schoolchildren recently released for summer holidays lapping up the sun along the banks of the Ob River.

Then, out of nowhere, a silver military jet with the distinctive red star on its tail descended toward the water at 700 km per hour, flying so low that the waves dispersed behind it like behind a fast boat. The MiG, nearly 4 meters tall with a wingspan of 9.6 meters, made its way to the Kommunalniy Bridge, a major local vehicle and foot bridge, and flew under its 30x120 meter central arch.

After making it through, the plane pulled up sharply to avoid the nearby railway bridge, just 950 meters away, which had a freight train on it at the moment of the incident.

Eyewitnesses were flabbergasted by the stunt, and local commanders were furious, and a media blackout ordered. But people talked, and garbled reports on the details of the insane incident began to make their way across the Soviet Union and around the world.

The MiG-17 was piloted by Valentin Privalov, a 30-year-old fighter ace dissatisfied with the slow progression of his career. Protesting his commanders’ decision not to allow him to head to Indochina, where the US war against North Vietnam and the Viet Cong was in full swing, Privalov wanted to prove himself.

That morning, Privalov was carrying out a routine mission, posing as a simulated ‘enemy target’ for a nearby anti-aircraft missile system. The pilot was known for his skill, but had been passed up in promotion on four separate occasions. After completing the routine mission, the pilot brought his plane down from the skies, seeing Novosibirsk and the Kommunalniy Bridge below him, and making two passes overhead before coming in for the fateful under-bridge stunt.

At that moment, as he would recall many years later, he saw his chance – to prove to himself and the higher-ups that he had the talent, or end his career (and most likely his life) right then and there.

Oddly, No Hell to Pay

After carrying out the stunt, Privalov returned to base and landed his plane as if nothing happened, and went home. The next day, he was arrested, with the military seeking to bring him up on charges for wanton aerial hooliganism and the endangerment of life and property, threatening if not a tribunal, then at a minimum the end to his Air Force career.

However, after speaking with Defence Minister Rodion Malinovsky, the decorated World War II field marshal who helped win the Battles of Stalingrad and Budapest, Privalov saw the charges against him dropped, and the pilot was allowed to take to the skies again. According to popular legend, local Communist Party boss Fedor Goryachev called Soviet leader Leonid Brezhnev personally to spare Privalov, who unintentionally put Novosibirsk on the radar of people around the world with his stunt.

In a telegram addressed to local Air Force officials, Defence Minister Malinovsky wrote: “The pilot Privalov is not to be punished…If he has not been on vacation lately, send him on vacation. If he was, give him ten days rest at his unit.”

Privalov never got his chance to go to Vietnam, but was able to continue doing what he loved, get promoted and go on to serve in the Air Force for another twelve years, ending his career as a lieutenant colonel and deputy commander of an elite fighter unit at Kubinka outside Moscow in 1977. After that, he would serve another 25 years in civil aviation, and several years more as a military instructor.

About That Famous Photo

Privalov’s stunt has been shrouded in mythology owing to the famous ‘photo’ supposedly showing the moment of the flight. In reality, the photograph is a collage commissioned by the Novosibirsk Museum in the 2010s, eventually making its way online, where it spread like wildfire in both the Russian and English sections of the internet. The photo deliberately exaggerates both the size of the waves caused by the MiG’s low-level flight, as well as the scale of the plane itself measured against the bridge. However, the story that it tells is absolutely true.

Photograph of Privalov from 2014. Tweet reads: "The legend of Chkalov [Valery Chkalov, a Soviet pre-war pilot ace] would be unthinkable without his famous flight under a bridge. 712th Guards Aviation Regiment pilot Valentin Privalov believed that jet fighters could fly just like Chkalov's did. It was then that Privalov came up with the idea of flying under Kommunalniy Bridge.