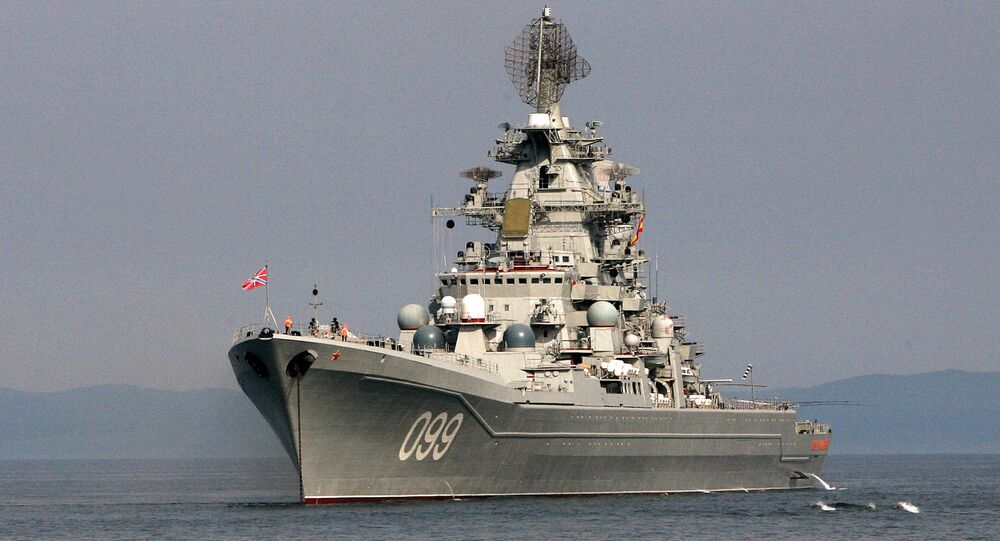 Why are Russia’s Most Advanced Warships Deployed in the Arctic?

On Sunday, Commander of the Russian Northern Fleet Vice Admiral Alexander Moiseyev announced that the fleet would conduct large-scale drills in the Arctic region later in June which would involve the most advanced surface ships and submarines.  Here’s an insight into why the Arctic is on the Russian military’s radar.

In the early 1930s, the-then USSR intensified research activities in the Arctic region, while also developing military infrastructure in the area and forming the Northern Sea Flotilla, which was then turned into the Northern Fleet.

During the Cold War, the Northern Fleet was already of strategic importance to the Soviet Union, given that the fleet was tasked with providing security of missions carried out by the Soviet strategic bombers which flew over the Arctic.

This explains the fact that the country’s most sophisticated warships were delivered to the area to implement the task.

Former Northern Fleet commander Vyacheslav Popov said that the fleet was the first to get the largest missile ships and nuclear-powered submarines.

“It can be explained by its location. The Baltic and Black Sea Fleets, for example, are located in a geographically limited theatre. As for the Northern Fleet, it has direct access to the ocean”, Popov added, recalling that during World War II, only this fleet conducted naval operations in the Barents and Norwegian seas, as well as in the Atlantic.

Mikhail Nenashev, chairman of the All-Russian Fleet Support Movement, in turn argued that from a strategic point of view, the US remains Russia’s main potential adversary at sea.

“In the event of a threat of a nuclear attack, the fastest and most effective response will come from Northern Fleet bases, not least because the fleet’s submarines are capable of firing directly from their moorings,” Nenashev pointed out.

According to him, the Northern Fleet currently accounts for more than 50 percent of the entire striking power of the Russian Navy.

© REUTERS / Anton Vaganov
An aerial view shows the Russian nuclear submarine Dmitry Donskoy moored on the eve of the the Navy Day parade in Kronshtadt, a seaport town in the suburb of St. Petersburg, Russia, July 28, 2017

This includes more than forty nuclear-powered and diesel submarines equipped with cruise and ballistic missiles, as well as many multi-purpose surface ships. The fleet also comprises powerful anti-submarine aircraft and a developed coastal defence system.

@Johnhand have post the the Empire off Ships in the World No other war ship like from Russia navy ,Peter the Great https://t.co/XrDNI8vAWn

As far as the Arctic region is concerned, it is also worth noting that the area is optimal for testing the new Russian nuclear-powered submarines and the test infrastructure is located relatively close to scientific and shipbuilding facilities in the cities of St. Petersburg and Severodvinsk.

Meanwhile, Northern Fleet commander Alexander Moiseyev has underscored that air defence of the Russian segment of the Arctic is being improved and the Northern Sea Route is under reliable protection. He added that the most advanced Russian missile systems S-400 Triumph are currently on combat duty on the Novaya Zemlya archipelago.