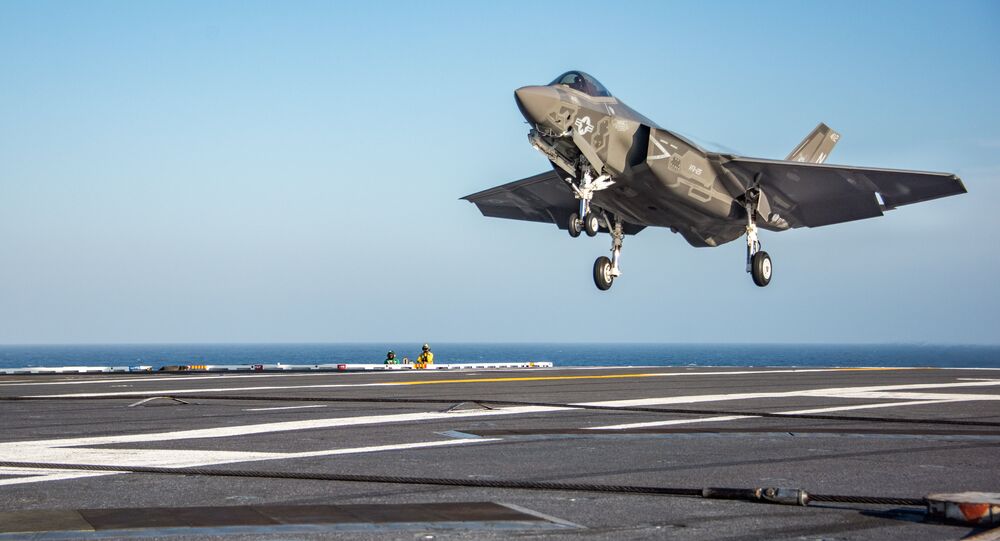 The terrifying footage posted on social media is not for the faint-hearted, as it seems to show a fighter jet careening off the deck of a supercarrier and disappearing, ostensibly into the waves

For those adrenaline junkies online, two videos have been posted on Instagram showing a nerve-wracking moment when a US Navy F-35C Joint Strike Fighter is launched from the deck of an American supercarrier at seemingly minimum catapult power.

In the first video, posted by RCAF_Pilot, the stealth fighter suddenly drops off below the rising bow of the ship in a chilling moment after having zig-zagged along the catapult track at an oddly slow pace. The viewer can relax the next instant, though, as the fighter reemerges, appearing to climb into the air, escaping the waves.

Good thing we have test pilots for this! #Repost @owen.aviation.photo ・・・ Why there are test pilots 😳 #repost @cincohamilton ・・・ Something you don’t see everyday...low energy catapult launch! That sink is scary, but it was a part of the test plan. The folks at PAX River needed to find the lowest amount of energy that the catapult needed in order to safely launch an F-35C...they definitely found it! Through a smart build up and mitigation the test professionals go where others don’t. #aviation #testpilot #f35c #aviationphotography #aircraftcarrier #catapult #f35 #flightdeck #carrier #aviationdaily #avgeekphoto #fullsend #nogutsnoglory #instaavaition #comeflywithme #aviationphotography #afterburner #pilotlife #militaryaviation #aircraft #avgeek #fighter #airforce #fighterpilot #flying #fly #flight #aviation #aviationgeek #rcaf_pilot

In the second video, one is offered a fascinating different angle of the tense moment, from below the bow of the ship. In it, the F-35C claws its way into the skies after skimming the waves in a dangerously close manoeuvre, with the waters shown parting because of the engine exhaust.

You seen the earlier video from the deck, now check out how close to the water the F-35C actually was! #Repost @cincohamilton ・・・ Watch the waters part because of the engine exhaust!! Here’s the last video, low energy catapult testing, from the front of the ship camera view. You can tell from this angle that the aircraft got close to the water. Remember though, this was a part of the testing and the team had prepared for this moment. #aviation #aviationphotography #f35 #aircraftcarrier #f35c #fightertestpilot #testpilot #ussnimitz #catapult #lowenergy #partingwaters #fighterpilot

According to the person who posted the videos, the spine-tingling moments involving the jet were part of a testing programme for the F-35C involving assessment of minimum catapult energy for a safe launch.

The caption reads that experts at Naval Air Station Patuxent River, also known as NAS Pax River, were attempting to determine the lowest amount of energy that the catapult needed in order to safely launch an F-35C from the deck of a supercarrier.

It adds that the terrifying sink below the bow was also apparently part of the test plan, and the last video, offering an angle from the front of the ship, shows just how closely the aircraft skimmed the waves.

The US Marine Corps is now operating both F-35B and F-35C squadrons after the arrival of the first aircraft carrier variant of the fighter jet to the service in January 2020, marking the official transition away from the F/A-18 Hornet.

The F-35C – the culmination of over 50 years of aircraft carrier-based fighter evolution – is a 5th Generation, long-range stealth strike fighter designed and built explicitly for carrier operations.

According to manufacturer Lockheed Martin, the fighter combines the capability of operating from a carrier deck with the capabilities of stealth, fused sensors and reliability, offering enhanced survivability and increased mission success rates.

Staff Sgt. Zade Vadnais
The first F-35A Lightning II assigned to the 354th Fighter Wing lands at Eielson Air Force Base, Alaska, April 21, 2020. A total of 54 F-35As will be stationed at Eielson AFB by the end of 2021, which will make Alaska the most concentrated state for combat-coded fifth-generation aircraft

The F-35C, with larger wings, greater internal fuel capacity and more robust landing gear than the other variants, is suitable for catapult launches, with its wingtips also folding to allow for more room on the carrier’s deck while deployed.

“The F-35C represents the leading edge of advanced fighter attack aircraft today… It will give the Black Knights a technological advantage across the entire spectrum of tactical aviation. This includes everything from advanced sensor and weapon integration to increased range and endurance. We will be more survivable and more lethal than we have ever been,” said a press release issued by the 3rd MAW on 22 January.