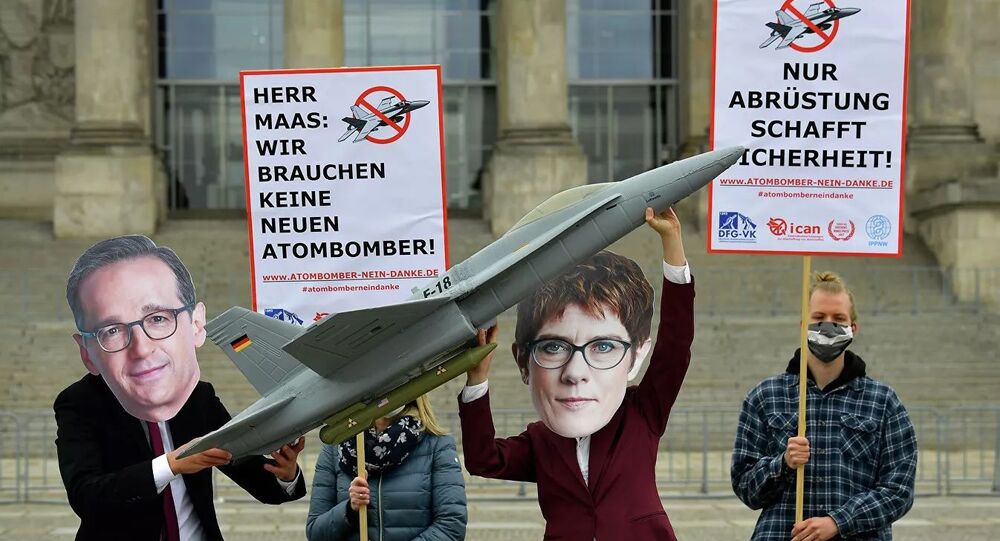 What began as a Bundestag debate about the fate of US nuclear weapons on German soil soon turned into a discussion between the nuclear powers after the US ambassador to Poland suggested Warsaw could station the deadly arms in Poland. Moscow has warned that such a redeployment would be a direct violation of the Russia-NATO founding act.

The renewed Bundestag discussion about the fate of the 20-or-so tactical B61 nuclear bombs stationed at the Buchel Air Base in western Germany began in early May, after the Social Democrats (SPD), members of Chancellor Merkel’s Christian Democratic Union-led grand coalition, suggested that Berlin should avoid the stationing of US nuclear weapons on German soil in the future.

The debate began after Defence Minister and CDU leader Annegret Kramp-Karrenbauer proposed upgrading Germany’s nuclear response capability by replacing the aging Tornado aircraft which would carry the weapons with Eurofighters and US F-18 Super Hornets. SPD leader Rolf Mutzenich responded by suggesting that nuclear weapons “do not heighten our security, just the opposite,” undermine it, and should be gotten rid of.

At the moment, the Luftwaffe has access to the bombs under NATO’s nuclear weapons sharing agreements, which authorize their use by German warplanes in the event of war.

The debate about US nukes in Germany is nothing new, with the Green Party demanding the withdrawal of the weapons from the country going back to the 1980s. The weapons first appeared in West Germany in the 1950s. Opponents of their deployment argue that it is a violation of the Nuclear Non-Proliferation Treaty, which commits Berlin “not to receive the transfer from any transferer whatsoever of nuclear weapons or other nuclear explosive devices or of control over such weapons or explosive devices directly or indirectly…or otherwise acquire nuclear weapons or other nuclear explosive devices.”

Germany’s left-wing parties, particularly Die Linke, are also in favour of disarmament, and have long expressed fears that the US’s confrontation with Russia or China could spill out onto German soil. This has led them not only to discuss the issue in the Bundestag, but to stage protests outside some of the many US bases operating in the country since 1945 about the use of German territory for American military operations abroad.

This time around, though, Mutzenich and the more moderate SPD proved the more outspoken critic of current nuclear policy, calling President Trump a ‘spaltpilz’, (lit. ‘fungus/mushroom of division’) that “breaks down NATO unity” during the debate. “There’s a difference between starting a debate on the role of nuclear weapons and whether NATO is obsolete and Europeans are seen as enemies,” he said last week, recalling Trump’s repeated statements over the past three years accusing Washington’s European allies of being ungrateful freeloaders.

© AP Photo / Michael Sohn
American flag flies on top of the U.S. embassy in front of the Reichstag building that houses the German Parliament, Bundestag, in Berlin, Germany (File)

Mutzenich also recalled that in 2018, the US adopted a new nuclear doctrine, which for the first time in history allowed the Pentagon to use nuclear weapons in non-nuclear conflicts against non-nuclear armed opponents. He and his fellow lawmakers also recalled that five years ago, the US began to modernize its B61 bombers in Germany.

The CDU’s counterargument is that removing the nukes would lead NATO to stop taking account of Germany’s opinions when planning future military operations. “This serves our defence…Germany will continue to fulfill its obligations in the framework of preserving the nuclear capabilities of the North Atlantic Alliance,” CDU representative Patrick Sensburg said.

Heiko Maas, Germany’s foreign minister, who happens to be a member of the SPD, sided with the CDU on the issue, criticizing his fellow Social Democrats and suggesting that “one-sided steps undercut our partners’ trust, but do not put us closer to a nuclear-free world. On the contrary, they weaken our alliance.”

Poland to the Rescue?

US Ambassador to Poland Georgette Mosbacher could not help but chime in on the debate in Germany last week, tweeting that “if Germany wants to reduce its nuclear sharing potential and weaken NATO, maybe Poland, which honestly fulfills its obligations, and understands the risks on NATO’s eastern flank, could use this potential at home.”

SPD lawmakers supported the idea, but Warsaw has so far refrained from commenting on the matter. Last year, Polish Foreign Minister Jacek Czaputowicz made clear that Poland was not interested in stationing American nuclear weapons on its soil.

“In its discussions with the Germans, the US wants to present Poland as a kind of ‘big stick’ against Berlin,” Dr. Michal Patryk Sadlowski, a University of Warsaw professor specializing in Eastern European history, said in an intervew.

“But Warsaw understands that participating in the political games of NATO allies is dangerous. Polish authorities do not rule out that a nuclear arsenal would strengthen the country’s military potential. But any sort of decision on any movement of such weapons can’t be one-sided.  And incomprehensible signals to Warsaw from the US via Twitter look less than serious,” he added.

Russian officials have suggested that the back-and-forth Germany-Poland debate is a moot point anyway, with Foreign Minister Sergei Lavrov indicating Tuesday that the deployment of the bombs in Poland would be a direct violation of the Russia-NATO founding act of 1997, which committed the alliance not to place nuclear weaponry in the territory of new member states (Poland joined NATO in 1999).

Whether or not Washington and NATO will be willing to tear up another key treaty with Moscow in the interests of geopolitics is unclear, although the US has not shied away from doing so in the past, quitting the Open Skies Treaty this week. Last year, the Trump administration scrapped the Intermediate-Range Nuclear Forces Treaty, a 1987 agreement aimed specifically at reducing the risk of nuclear war in Europe. In 2002, the Bush administration abolished the Anti-Ballistic Missile Treaty, aimed at reducing the risk of a new nuclear arms race and the development of anti-missile systems. In 1990, US Secretary of State James Baker made a promise to Soviet leader Mikhail Gorbachev that NATO would not expand beyond reunified Germany. That commitment was broken in the 1990s, 2000s and 2010s.

In any event, Pal Dunay, a professor on NATO and European security issues at the George C. Marshall European Center for Security Studies, suggests that when it comes to the nuclear issue, it’s important to remember that this is an election year.

“Donald Trump is counting on being reelected in November, and European security has again appeared on the agenda. Germany will choose a new chancellor next year. Hence the attempts by German parties to present a new program that’s different from the current one. In reality, Washington and Berlin have already agreed on everything. And don’t forget that in Europe there’s a consensus about American nuclear weapons as a balance against Russian nuclear weapons,” Dr. Dunay said.

In other words, any serious discussion about the future of US nuclear weapons in Europe is unlikely before 2021, as it would require both the US and Germany to decide on their foreign policy priorities. Until then, the bombs will stay where they are.