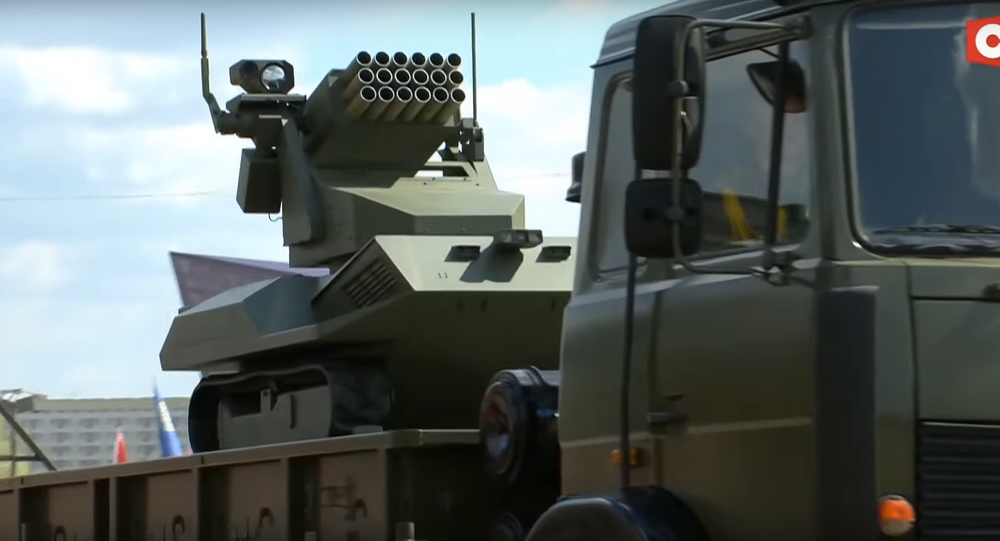 The drone was one of well over a dozen brand new or heavily modernized pieces of military hardware developed by the Belarusian defence industry to be displayed during the parade.

Belarus showed off a bevy of new drones for use by the military at the parade dedicated to the 75th Anniversary of Victory in the Great Patriotic War on Saturday, including a unique rocket artillery-launcher and a machine gun-toting combat platform.

The artillery drone, dubbed the ‘Vistl’ (i.e. ‘Tin Whistle’), features 18 artillery launch tubes for S-5 ground-to-ground rockets, sharp Tesla Cybertruck-style angular lines, and a tracked chassis, along with a turret-mounted targeting/control camera and antenna array. The radio-controlled system is believed to have a range of up to 3.5 km, and an autonomous operating capability of 24 hours.

The other drone, the Berserk, appears to feature a similar chassis, but is armed with a pair of twin mounted heavy machine guns, as well as front-mounted flare launchers and antenna array.

Both drones were developed by Belarus’s State Military Industrial Committee.

Along with ground-based drones, the parade featured several unmanned aerial vehicles, including traditional reconnaissance and strike drone designs with ranges of up to 300 km, as well as a unique Belarusian-made helicopter attack drone design known as the ‘Eye-Sky’. That system was said to have been developed by the appropriately named Unmanned Helicopters Design Bureau, and was shown to President Alexander Lukashenko during a demonstration of Belarusian electric vehicles last week.

Belarusian-made UAVs on display during Saturday's May 9 Parade dedicated to Victory in the Great Patriotic War. Minsk, Belarus.

Belarus and Turkmenistan were the only two post-Soviet republics to hold full-scale military parades in honour of the 75th anniversary of Victory in the Great Patriotic War on Saturday, with other nations postponing or scaling down the festivities amid health concerns stemming from the COVID-19 pandemic. In his speech at the parade, President Lukashenko said Minsk “didn’t have a choice” but to hold the parade, adding that “and even if we had such a choice, we would have done the same.”

In Russia, aerial parades were held across multiple cities, including Moscow.  The Kremlin postponed holding a grand, full scale parade in mid-April, with two possible alternative dates said to be possible – June 24 (the 75th Anniversary of the June 24, 1945 Victory Parade on Red Square) or September 3, the 75th anniversary of the end of the Second World War).