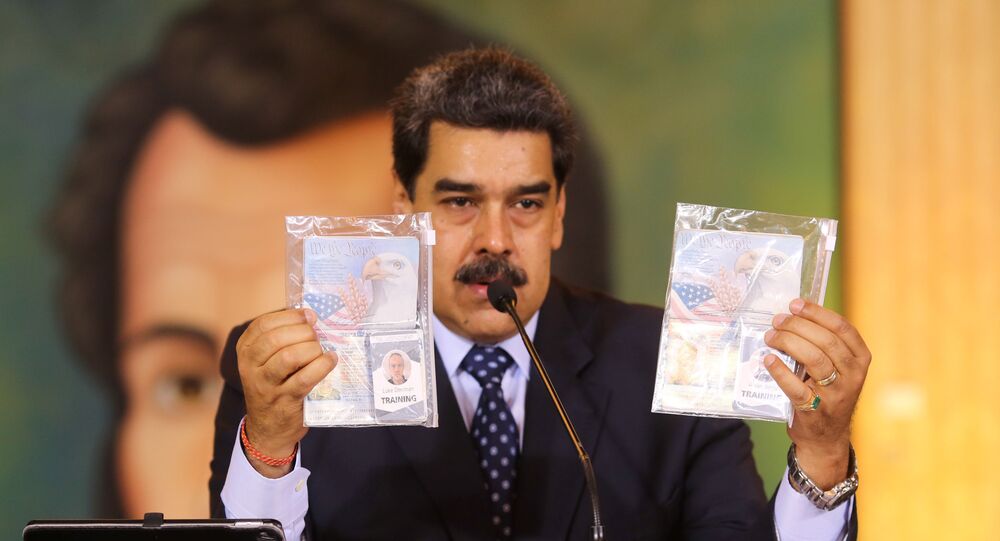 A 13-strong group of US citizens and dissident Venezuelans attempted to infiltrate Venezuela via the coastal state of La Guaira from Colombia in the early hours of the morning, their aim being to precipitate a nationwide rebellion against the government of Nicolas Maduro.

The contract signed by private mercenary firm Silvercorp USA and opposition elements in Venezuela, which provided the basis for ‘Operacion Gedeon’, the attempted 3rd May coup against the Nicolas Maduro government, has been published online.

The attempt to install Juan Guaido as President and capture and intern high-ranking government officials was in the end quickly and easily stifled, the conspirators captured by the Bolivarian National Armed Force.The surreal incident has been widely condemned and ridiculed, and compelled US President Donald Trump to deny Washington was in any way involved in the bungled, befuddling operation. Questions still abound over the calamitous intervention, but the contract sheds significant light on the the extent of the dastardly plan allegedly financed and backed by Guaido and his supporters.

​In essence, it outlines how Silvercorp were enlisted to plan and execute "an operation to caputre/detain/remove 'Primary Objective' [Maduro]”, and facilitate the “Administration” - Guaido’s government in waiting - taking power. Curiously, the company undertook to create a "diverse project team, inclusive across gender, ethnicity, age, disabilities and national origins" for the task. Furthermore, the firm pledged to "include media teams at all stages of the operation to record documentary style footage [including] but not limited to B-roll, critical moment captures and personal interviews” - in other words, make a movie about their escapade.

“The initial project phase (45 days) shall be at a cost of US$50,000,000.00. This includes all operational costs...and shall include but is not limited to vehicles, transportation and fuel…If unforeseeable costs arise during the project, [Silvercorp] will provide a purchase order to the Administration…The Administration shall pay a success bonus to Service Provider in the amount of US$100,000,000.00. This bonus is contingent on a successful project completion (the exit/removal of current Venezuelan regime and entrance/installation of recognized Venezuelan government),” the contract begins.

The document goes on to outline a variety of further ways Silvercorp would profit from the coup, including imposing significant rates of interest on a variety of bonuses owed in the event of its success - although specific details of how the firm intended to depose Maduro aren’t provided. Nonetheless, Airan Berry, one of two US citizens involved in the raid captured by Venezuelan authorities, said in a videotaped confession he was tasked with taking over an airport tower and seizing a string of targets in Caracas, including the Palacio de Miraflores, the residence and workplace of the Venezuelan President.

​Moreover, the contract specifically states Silvercorp is "authorized to employ any organic direct fire weapons systems except fixed wing assets for precision-guided bomb drops”. The firm “may also authorize employment of AC-130, Armed Predator and Maverick Missile assets” - ie deploy drones and conduct missile strikes - and “employ any available assets to engage no or low collateral damage fleeting targets”. Guaido's government was also expected to pay US$450,000 to any "next of kin of any member in the task group killed in action" and US$250,000 "to any member in the task group who losses [sic] a limb or eyesight" over the course of the "project".

The relationship between the Guaido-led government and Silvercorp is also projected to endure long after the removal of Maduro, with the firm training Venezuelan paramilitary units, among other things.

“After project completion, [Silvercorp] will continue advisor services in counterterrorism, counter narcotic operations and recovery of stolen Venezuelan financial assets worldwide [and] provide a Quick Reaction Group to advise Venezuelan counterparts in conducting advisory operations in various locations…[Silvercorp] will convert to a National Asset Unit that will act under the direction of the Administration to counter threats to government stability, terror threats...These services include but are not limited to mission advisement, recruitment, selection and assessment, physical fitness programming, target programming, medicine, communications, demolitions, covert methods of entry, surveillance, close target reconnaissance,” the contract continues.

The document only grows more shocking thereafter, a section on who and what will be targeted by Silvercorp operatives and the aforementioned trained paramilitaries before, during and after the coup - states “certain military and paramilitary forces (former regime security forces, conventional and/or unconventional air, ground and naval forces)” have been designated “declared hostile forces”. This list includes “the revolutionary armed forces of Colombia, the National Liberation Army, Hezbollah, illegitimate Venezuelan forces, Nicolas Maduro, his lieutenants, key associates, any armed supporters, Diosado Cabello, his lieutenants and key associates and armed and violent collectivos” - collectivos being working class civil defense forces loyal to the government.

​Still, as murderous and troubling as the ultimately harebrained scheme concocted by Silvercorp was, some social media users still managed to see the funny side, noting sections of the contract, and indeed Silvercorp’s corporate website, were plagiarized almost verbatim from terms and conditions sections of other company homepages.