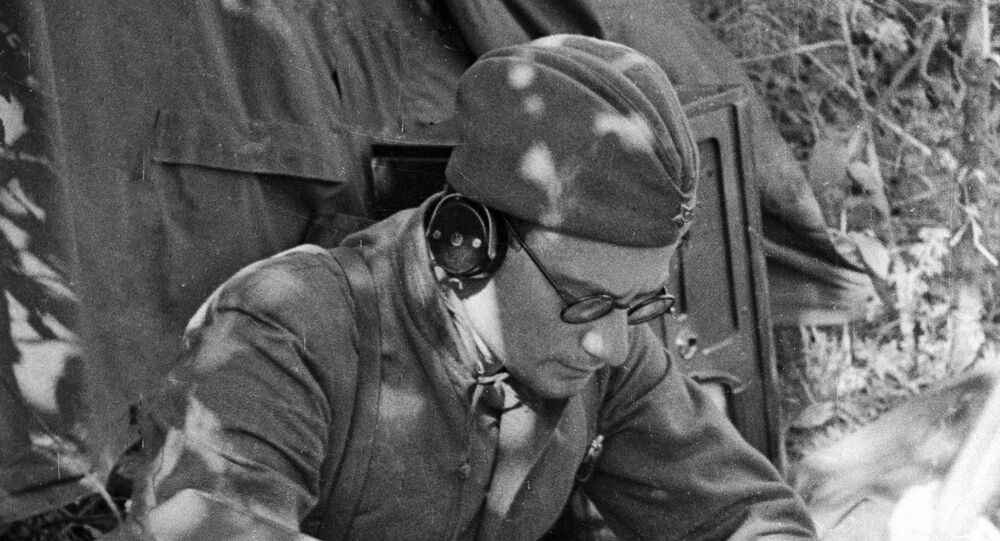 Nazi intelligence and the Kriegsmarine mastered the art of spreading radio disinformation among the Allies after the occupation of France and the campaign for the Atlantic. However, by 1944, the NKVD and SMERSH (Red Army counterintelligence), set up similar operations, disrupting Wehrmacht intelligence-gathering until the very end of the war.

The ‘funkspiel’ (German for ‘radio play’) carried out by Soviet intelligence officers during the Second World War helped cripple German intelligence-gathering operations on the Eastern Front, and made a major contribution to victory, saving tens or even hundreds of thousands of lives, Vladimir Makarov, a Russian intelligence services historian who has written extensively on the subject, says.

Speaking to Sputnik, Makarov explained that although the idea of radio play disinformation was not a novelty of the Second World War, it was an area that the Soviets quickly took an interest in after the start of the war on the Eastern Front in June 1941. “The first radio play to misinform the enemy was carried out by the Special Department of the North-Western Front in September 1941,” the historian recalled.

But it would not be until the spring of 1942, when German special forces began dropping parachutists armed with mobile radio stations behind Soviet lines in large numbers, that funkspiel would become a major tool for Soviet counterintelligence efforts.

On April 25, 1942, People’s Commissar of Internal Affairs Lavrenty Beria presented Joseph Stalin with a report on German agents detained with radio equipment. “The NKVD believes that the captured German radio equipment can be used in the interests of Red Army high command to misinform the enemy with regard to the deployment and regrouping of Red Army units,” the report indicated. Stalin approved the proposal, and from then on, German high command began receiving reports about strange goings-on on the Eastern Front.

© Sputnik / Олег Ласточкин
The building where the STAVKA, Soviet high command headquarters, was located during the war. Moscow.

According to Makarov, there is an important distinction to be made between Soviet and Nazi German funkspiel efforts. “Unlike the radio play carried out by the Germans, ours were centralized, and featured the participation of the general staff. There, a separate group worked on the creation of misinformation materials. Furthermore, the best staffers were assigned to this work.” This, the historian noted, meant that each misinformation operation was carefully prepared for maximal effect.

What’s more, Makarov said, the bulk of German intelligence officers who were captured agreed to work for the Soviet side, with careful checks made to test how sincere these new double agents were. This included looking out for any secret signals these agents might be ordered to send in the event of capture. The NKVD issued strict, detailed instructions on the use of these double agents by late 1942, distributing them to territorial and army counterintelligence units.

“In the event that a successful radio play operation was carried out, agents were not only spared prosecution, but often even rewarded,” the historian explained.

The Soviet doctrine of maskirovka (lit. ‘disguise’), or military deception, i.e. the use of measures ranging from camouflage and concealment to decoy and dummy mockups and engaging in false maneuvers, would become a key Red Army tactic during the Second World War, and was used again during the Cold War and even in Russia’s post-Cold War military doctrine.

In funkspiel too, Makarov stressed, the famous concept came into play. “In order for our misinformation to be considered real, and to minimize the likelihood of a particular radio play operation from failing, maskirova measures were taken.” This meant, for example, that when a packet of misinformation was sent out, Red Army or supply units would engage in pretend activities which would allow any other possible German agents in Soviet rear areas to be able to observe and confirm the ‘validity’ of the misinformation.

For example, knowing that the Germans had a large number of agents concentrated in Moscow, the country’s main rail hub, Soviet high command would dispatch equipment and ammunition along the ring road, indicating preparations for (fake) offensives. Furthermore, fake depots were constructed to hold fake equipment. Similarly, knowing that Nazi intelligence was tracking the movement of senior Red Army commanders, funkspiel operations would include reports on generals being sent in one direction when in reality, they would be deployed somewhere else.

Funkspiel operations even assisted in the defence of Moscow in June 1942, with a planned Luftwaffe bomber raid called off due to false radio intelligence reports that several fighter regiments, anti-aircraft artillery, searchlights and blimps has been transferred to the capital to shore up defences.

Similarly, radio play was used to provide the German high command with false information on the state of Soviet military industry, with tank factories, for example, either overstating or downplaying their true production output.

Soviet funkspiel was even used to thwart Nazi efforts to rile up nationalist sentiments in various regions of the USSR, and to stop potential sabotage operations against railways. “For example, it was very important to protect the railway connection between the Murmansk and Arkhangelsk regions, where the equipment supplied by the Allies to the USSR under Lend-Lease came from,” Makarov said.

Another trick played by Soviet intelligence was to conduct special funkspiel missions deliberately designed to show a lack of professionalism by Soviet agents to give Nazi intelligence a false sense of superiority. In these operations, crude, clumsy work by Soviet security organs would be shown, with coded messages deliberately allowed to be cracked for maximal effect.

From Defence to Offense

By 1944, after the Red Army completed the liberation of the majority of Soviet territory and began moving into Eastern Europe toward Germany, funkspiel operations took on a new complexity and importance, covering for Soviet offensive operations.

“For example,” Makarov recalled, “during the Budapest offensive operation in Hungary in early 1945, troops from the 3rd Ukrainian Front were used in the attack. To smash a Wehrmacht group which was sent to break through to the city to help the Nazi forces surrounded in the capital, the 3rd Ukrainian Front’s SMERSH directorate staged a radio play operation dubbed ‘Signalers’. The Germans believed the disinformation which was transmitted, and removed significant forces from the main direction of the attack, allowing our troops to liquidate the Nazi breakthrough.”

According to the historian, toward the end of the war, Soviet funkspiel operations became so complex that they were able to mislead German high command not only about the deployment of individual battalions or regiments, but entire armies. This, he said, effectively deprived German intelligence from providing the Wehrmacht with reliable information about Red Army plans.

“The Germans also failed to disrupt the work of the Soviet rear areas. Our security agencies neutralized thousands of saboteurs, with tens of thousands of weapons, explosives and ammunition prevented from going off or exploding in the Soviet hinterland,” he added, noting that this included stopping assassination attempts against Soviet leaders.

“It can be said that the Soviet special services unconditionally defeated the enemy. In essence, the work of the massive German intelligence machine was for nothing. Therefore, the organizers and participants of these radio play actions made a huge contribution to victory,” he stressed.

Possibly the most famous Soviet funkspiel mission was Operation Berezino, a deception operation that kicked off in August 1944 and would see native German antifascist fighters take to the airwaves to spread disinformation about a major (non-existent) pocket of German resistance behind Soviet lines in the forests of Belarus. The operation made use of Lt. Col. Heinrich Scherhorn, a real, decorated World War I and World War II officer who was captured in battles outside Minsk, and who agreed to cooperate with Soviet intelligence to take part in the charade about this ghost German army unit.

Scherhorn’s ghost army of 2,000 troops was used to lure Nazi intelligence units and army forces into traps by attempting to make contact with his forces and provide them with supplies. The operation proved successful, so much so that the German high command continued to make contact with him and believed his force was real until the very end of the war, even awarding him the Knight's Cross and the Iron Cross in March 1945.

Specially-trained Soviet units impersonating Wehrmacht troops were formed to meet arriving Nazi paratroopers. These units, under the command of Otto Skorzeny, the legendary commando, saboteur and spy, were sent on an operation to verify the existence of the ‘Sherhorn units’, but got neutralized along the way.

“Soviet intelligence officers ‘crossed swords’ with Skorzeny and his men several times during the war, and always successfully,” Makarov noted. “Judging by his recollections, Skozeny himself remained blissfully unaware that the ‘campaign’ by Sherhorn and his units in the Soviet rear was actually a brilliantly executed operation by the Soviet special services.”

Ultimately, the NKVD and SMERSH managed to keep the German high command in the dark about the Sherhorn deception until the closing days of the war. On May 1, 1945, the German side informed Sherhorn about Adolf Hitler’s suicide, helping to confirm separate reports about the Fuhrer’s demise.

On May 5, German intelligence sent Sherhorn its final telegram, which read: “The superiority of the enemy’s forces have defeated Germany…With a heavy heart, we are forced to stop providing you with assistance.” Three days later, on the night of May 8, 1945, Germany unconditionally surrendered to the Allies.